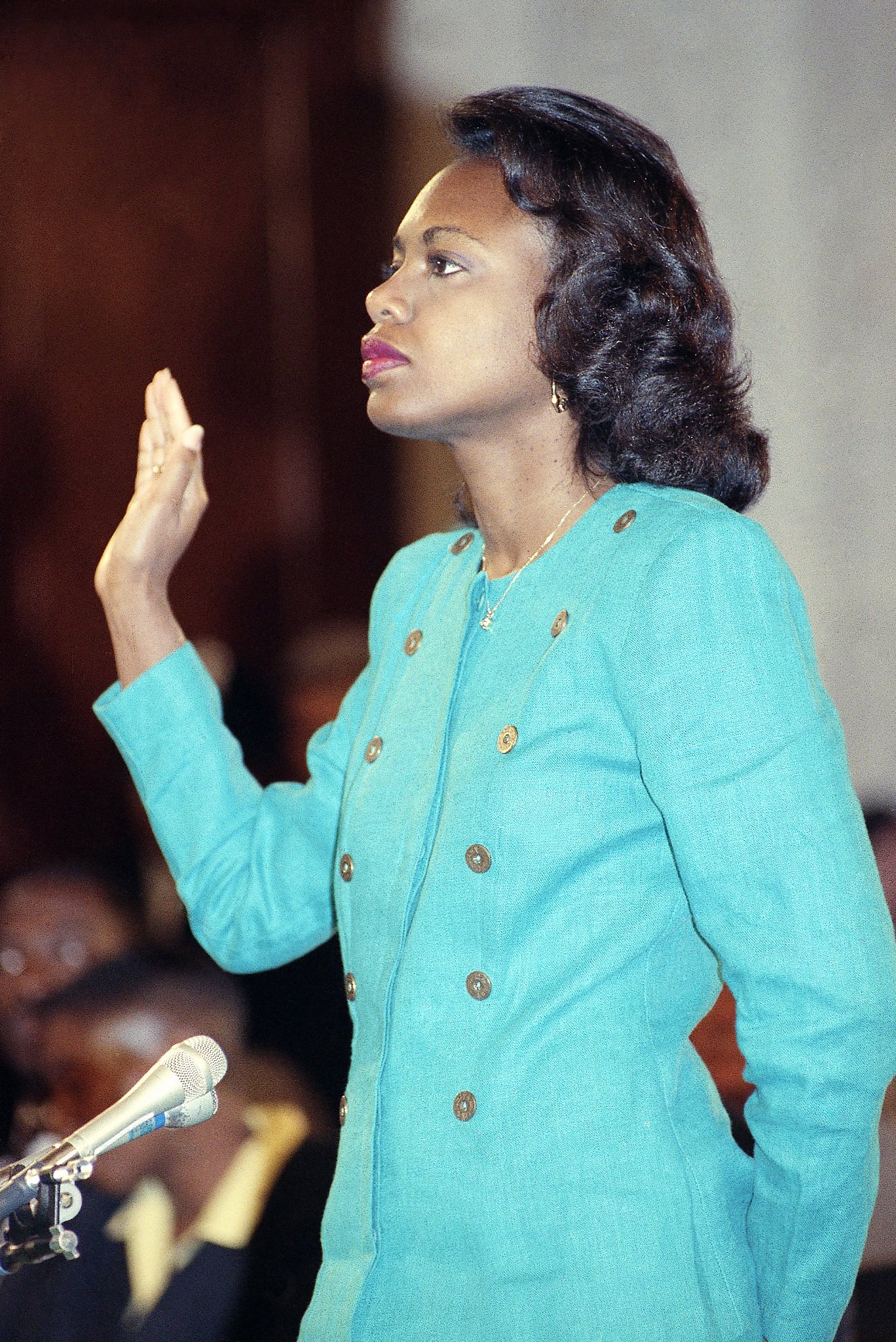 In 1991, the year Anita Hill testified before the U.S. Senate Judiciary Committee that Clarence Thomas, now a U.S. Supreme Court justice, had sexually harassed her, I had just started middle school. I didn’t know what sexual harassment meant (as it turned out, neither did most adults), nor did I fully understand the high stakes of a Supreme Court seat.

But there’s no one as alert to lopsided power dynamics as a child who’s just started middle school. And even then, catching occasional glimpses of Hill’s testimony on television, I could recognize that there was something very wrong with the spectacle.

Start with the fact that it was a spectacle, and that I could tell that’s exactly what it was. A large group of elderly white male senators, glowering at a young African American woman who sat alone under a bank of lights — that’s a scenario full of loaded ideas, but justice isn’t among them.

I remember noticing how careful Hill, now a professor at Brandeis University, was with her self-presentation. Her coordinated outfits, her ladylike makeup, her decision to speak every word calmly and with clear enunciation.

I remember realizing that none of the people she would address during those weeks — not the senators, not the reporters, certainly not the furious Thomas himself — seemed to regard their own remarks or presentation with similar care.

Like a lot of women, I’ve been thinking back to that moment this week. It’s been hard to avoid thinking about it.

Not only did Palo Alto University Professor Christine Blasey Ford allege that Supreme Court nominee Brett Kavanaugh attempted to sexually assault her when they were both teenagers, sparking a massive political controversy, but also the social climate around gender hasn’t been this combative in my adult lifetime.

The latter is kind of inevitable when the current occupant of the White House has been accused of sexual misconduct many times, but how we handle the former says a lot about how far we’ve come since 1991.

So far, the answer is that we haven’t come very far at all.

It took maybe two minutes for everything around Ford to turn into a spectacle. Mass access to the Internet is a new development since 1991, and harassers used it to leak her address and taunt her with death threats. Ford and her family have gone into hiding.

By coming forward, Ford has permanently lost her chance at a peaceful and anonymous life; she has made powerful enemies and will have to deal with harassment for the rest of her life. (Nearly 20 years after her testimony, Hill received a phone call from Justice Thomas’ wife, who told her to “consider an apology.”) This grim outcome is guaranteed whether or not she chooses to testify.

Meanwhile, Ford faces the Republicans of the Senate Judiciary Committee, whose haste to confirm Kavanaugh was palpable in their initial insistences that she couldn’t possibly know what she was talking about.

The only lesson that this (still overwhelmingly elderly, white and male) group seems to have taken from 1991 is that they should present better optics when asking a woman about sexual allegations against their favored judicial pick. One of their rumored proposals — having their female staffers ask her questions instead of asking themselves — sounds like the punch line to a TV comedy pitch.

The idea that we may all be fooled if they just switch the scenery — when what’s really necessary is an alteration of the play’s entire script — well, I’d laugh if the stakes weren’t quite so high.

That’s why the other question I’ve been asking this week is whether anything will change in my lifetime.

It would be easy to believe the answer is no, that we’re going to remain wedded to the same old destructive power dynamics, forever and ever. Maybe that’s still the likeliest outcome.

But history takes U-turns in the strangest ways, usually at the strangest times. So even as this grotesque episode lurches into gear, dragging with it ugly political machinations and a frightening number of men willing to defend sexual assault, I’m keeping an eye on other, quieter signs.

Like the fact that complete strangers took it upon themselves to raise hundreds of thousands of dollars for Ford’s personal security.

Like the fact that today’s Senate has 23 women instead of the mere two who were there during the Thomas hearings (and a lot of that change has to do with the record number of women who ran for office after Hill’s testimony).

Like the fact that there are millions of other young girls watching this spectacle play out, and they too can recognize what they’re seeing.