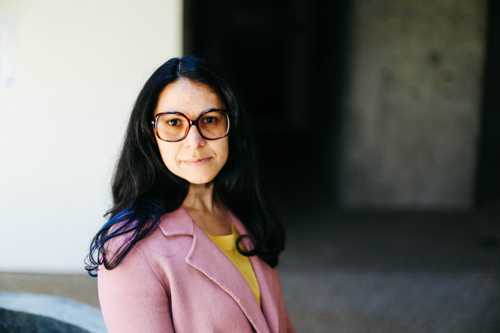 Isabel Dees previously spent two years as an investigator in the Title IX Office after working eight years as a lead service coordinator in the campus’s Disability Resource Center.

Isabel Dees is familiar with the long and difficult struggle for civil rights, and as the new director of the office charged with preventing and addressing sexual violence, she’s ready to further the cause.

“I’m the daughter of immigrant parents. I’m the first in my family to go to college. I was an Educational Opportunity Program student,” Dees said. “Every aspect of my experience I owe to someone’s effort to champion equality and civil rights.”

“It’s humbling—such an honor to have this opportunity.”

Dees hopes to continue the push for educational equity and social justice by focusing on improving how the office responds to complaints, spending more time engaging with the campus community, and ultimately demonstrating that the work of the Title IX office is civil rights work.

Dees, who graduated from UC Santa Cruz and earned a law degree from Monterey College of Law, was selected to lead the office after a nationwide search. She previously spent two years as an investigator in the Title IX Office after working eight years as a lead service coordinator in the campus’s Disability Resource Center.

The Title IX Office’s work is grounded in the 1972 amendment to the education code that prohibits discrimination on the basis of sex in any federally funded education program or activity. The work of Title IX offices across the nation has received significantly more attention with people being more willing to come forward to report sexual misconduct or other instances of gender-based discrimination.

Dees said she believes the current generation of students rightfully expects to be in an environment free from sexual misconduct—and that the nation and academy are seeing the ripples of that through the #MeToo movement and the number of high-profile sexual misconduct cases in academia.

In the past year, the office focused on streamlining its work to more expediently respond to allegations. The staff found areas where the administrative process can be improved. As a result, it made significant gains in reducing the number of active cases. The office expects to have concluded all investigations launched in the last academic year by the start of classes.

The office investigated 9 percent of the reports. Some of these investigations involved more than one complainant and/or report. Substantiated allegations can lead to disciplinary measures that range from a written warning up to expulsion for students or termination for employees.

The Title IX Office addressed 20 percent of the reports using alternative resolutions, which are actions to address and resolve a situation without a formal investigation. These actions can include educating parties to prevent future incidents, ensuring access to any university related event, program or class, providing mediation and conducting trainings.

The majority of the reports, 72 percent, didn’t include enough information to start an investigation or the complainants did not respond to outreach by the office. Staff provided resources to complainants, such as more information about the campus CARE Office, and the Employee Assistance Program. In 8 percent of these cases, the respondent was not affiliated with the university and thus not subject to university policy.

The campus has significantly invested in the office over the past several years, given the importance of the issue and increasing reports. Dees said a key priority for the office is conducting successful staff recruitments for an investigator and deputy director as adequate staffing ensures timely response and investigations.

The goal, Dees said, is to ensure timely investigations and afford more time for outreach, training, and innovative programing that promotes gender equity and fosters a climate of inclusion and accountability that helps prevent Title IX-related problems in the first place.

“There are lots of opportunities for the office to collaborate and cooperate with existing efforts to address gender equity and inclusion at UCSC, critical initiatives like Beyond Compliance. I look forward to connecting the work of the Title IX Office more closely to these efforts,” she said.

Dees will also prioritize strengthening relationships with critical campus partners like CARE, CAPS, UCPD, the residential colleges, student government, student organizations, the Academic Senate, and academic departments. Dees invites students, staff, and faculty to continue to contact or visit the office when they have a concern, but also hopes they come to see her and the Title IX Office as a resource.

Dees plans to share more information about the work of the Title IX Office, providing more detailed data and inviting analysis and scrutiny. Hosting a graduate student to “help analyze reporting data could help improve and inform targeted prevention and education efforts by honing in on when and where incidents seem to spike or cluster,” she said.

“That’s what accountability looks like,” she said. “To be open to input, scrutiny, and introspection on how to more effectively and efficiently do the work.”