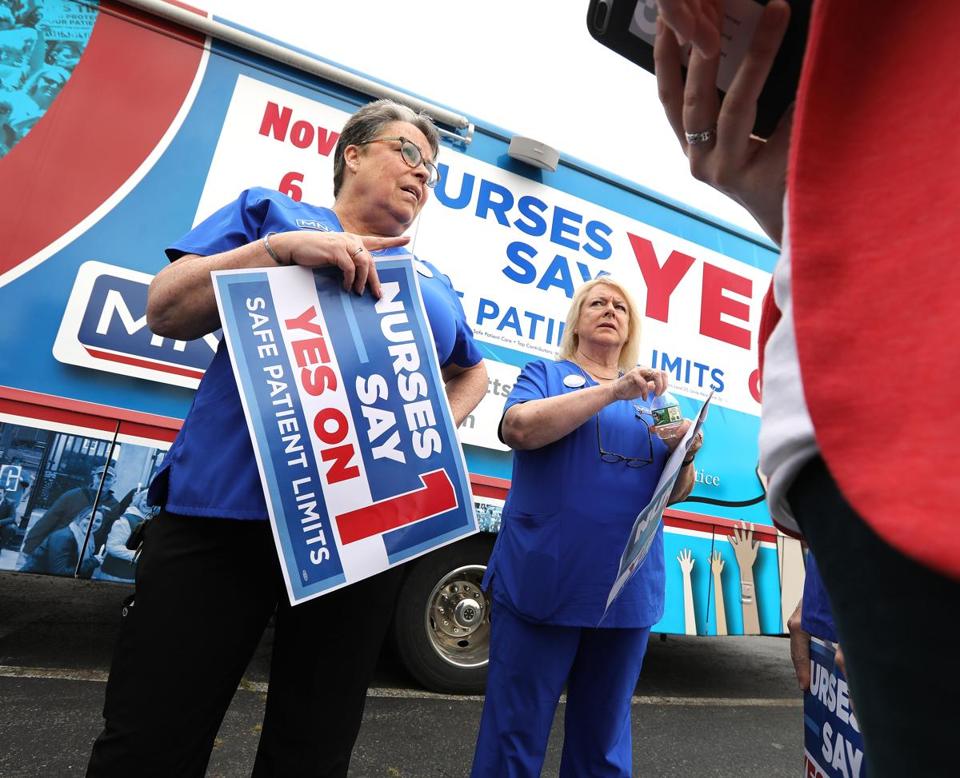 Massachusetts’ health care watchdog agency on Monday said that it is studying the cost implications of a state ballot question to regulate nurse staffing in hospitals, in the first independent study of the controversial proposal.

Officials at the Health Policy Commission revealed they have been analyzing the issue for several weeks and plan to release their findings at a public meeting on Oct. 3.

The ballot question, backed by the Massachusetts Nurses Association, a labor union, would set limits on the number of patients assigned to nurses at one time. The union says limits are necessary to improve patient care.

Hospital leaders disagree. A report commissioned by the Massachusetts Health & Hospital Association said the ballot measure would force hospitals statewide to hire thousands of additional nurses in a matter of weeks, costing $1.3 billion in the first year, and over $900 million a year after that. Hospital leaders say they can’t afford such costs and would have to shut down important services if the ballot question passes.

Get Talking Points in your inbox:
An afternoon recap of the day’s most important business news, delivered weekdays.

“The mandating of nurse-to-patient staffing ratios in Massachusetts could have a significant impact on health care costs, quality, and access in the state,” Stuart Altman, chairman of the commission, said in a statement. “For this reason, the Health Policy Commission has developed its own assessment of the potential cost and quality implications if such a measure were to become state law.”

The commission, which studies factors that contribute to rising health care costs, also plans to devote a portion of its annual public hearing to the ballot issue. The hearing is scheduled for Oct. 16 and 17 — just three weeks before Election Day.

Hospital leaders, who strongly oppose the ballot question, have urged the commission to weigh in.

“We thank the Health Policy Commission for their continued commitment to controlling costs for consumers across Massachusetts, and we look forward to their review of the massive price tag associated with Question 1,” Dan Cence, a spokesman for the hospital coalition, said in a statement.

Last week, the Massachusetts Association of Health Plans also requested a study on the ballot issue.

“It’s important for the voters in Massachusetts to have an independent analysis conducted, and I think the Health Policy Commission is the appropriate place for that to happen,” said Lora M. Pellegrini, president of the insurers group.

Massachusetts hospitals are currently allowed to staff units as they wish, and nurses at some hospitals have higher caseloads than at others. The ballot question sets limits that range from one patient per nurse to five patients per nurse, depending on the patients’ diagnoses and the severity of their conditions.

Kate Norton, a spokeswoman for the union’s ballot committee, said the ballot question would have “minimal impact” on hospitals, according to the Boston College study.

“We see no reason that there should be any impact on health care insurance costs,” she said in a statement.

California is the only state with mandated patient limits, though the limits proposed for Massachusetts would be more strict.

A political committee established by the Massachusetts nurses union has raised $5.7 million and spent $4.9 million so far to promote its ballot question, according to campaign finance reports. The hospital association’s committee has raised $10.5 million and spent $9.2 million to try to defeat the question. Much of the spending on both sides is for television ads.