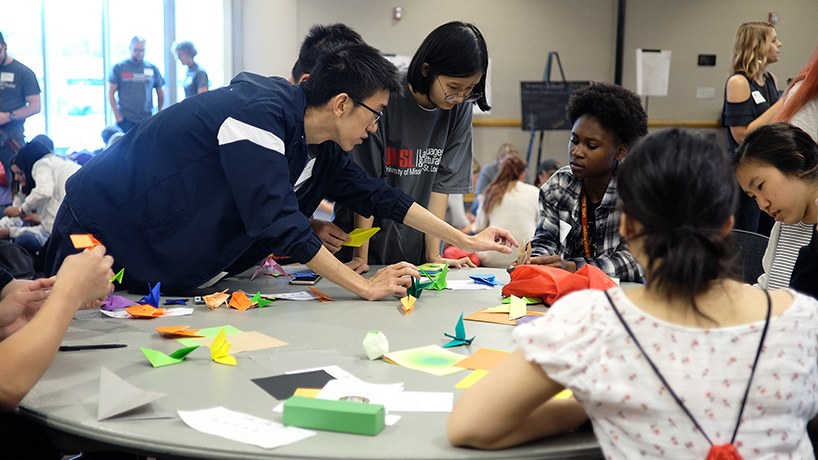 St. Louis-area high school students engage in an origami activity inside the Century Rooms at the Millennium Student Center last Friday during the inaugural World Languages Day. It was just one example of the language-themed games and activities designed to help students celebrate and practice their skills. (Photos by Jessica Rogen)

A girl lost a game of rock-paper-scissors only to have her opponent bring a hammer down toward her head. She quickly flipped a large bowl up, over her noggin and deflected his blow.

Not to worry, though. The hammers were plastic and part of a Japanese toy called rock paper scissors hammer helmet. The two demonstrated it to a group of St. Louis-area high school students as part of the University of Missouri–St. Louis’ World Languages Day.

Friday’s event, held in the Century Rooms in the Millennium Student Center, was the brainchild of Sandra Trapani, UMSL teaching professor in French and chair of the Department of Language and Cultural Studies. 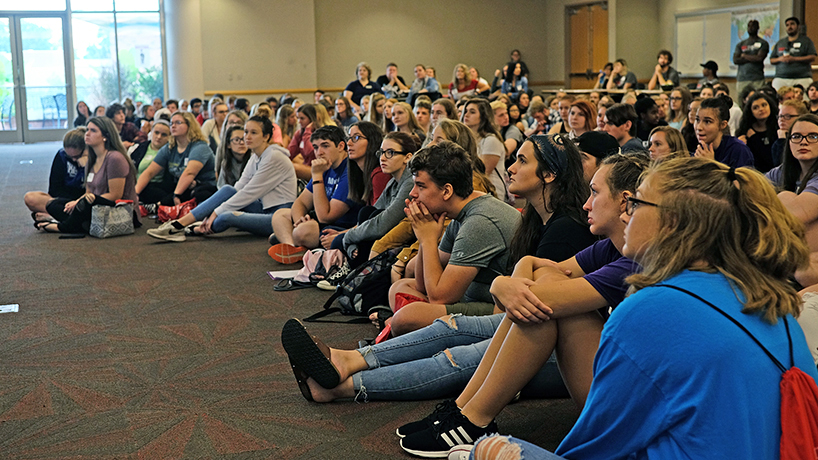 “It was just an idea I had last spring as a way to bring high school students to campus and show them what we’re doing, let them show off what they know how to do with the language and let them have some fun interacting with our students,” said Trapani, while explaining that the event was open to advanced language students in the third, fourth and fifth level.

“What we hope is that they renew their commitment to studying languages, that they consider UMSL as an option for them. We would love to welcome them in our department and promote the idea to them that we need to think about making the world better, and studying language and studying other cultures opens the world up to them. They’re learning tolerance; they’re learning a lot of empathy, so we’re hoping that will carry them far in life.”

Along with the entire Department of Language and Cultural Studies faculty, Trapani rallied support from departments and organizations around campus, and the Advanced Credit Program helped with funding. Together, they planned a host of language-themed activities and games: poetry recitations, skits, a scavenger hunt, spelling bees, tongue twisters, geography games and a poster contest, to name a few.

Della Thompson, French instructor at Marquette High School, thought seeing the campus and getting an idea of college life would encourage students to continue studying languages after high school. Her colleague, Emily Thompson, agreed and hoped that her students’ peers would enhance their experiences. 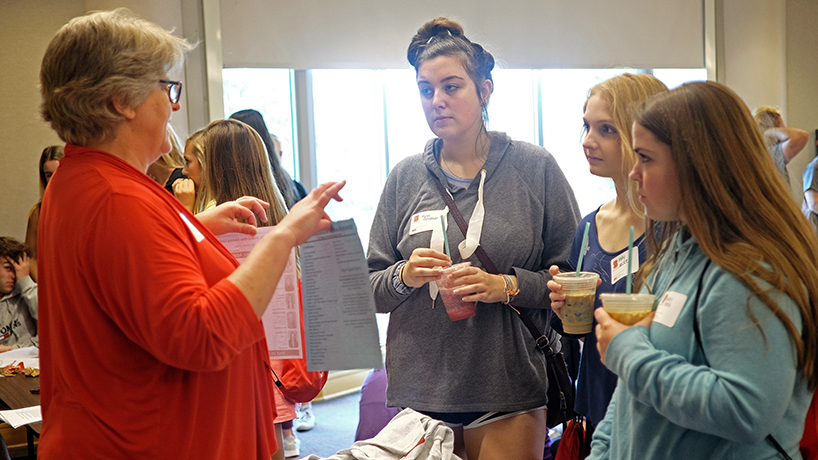 College of Arts and Sciences faculty, such as Associate Dean of Students Birgit Noll, introduced the students to college-level language opportunities like study abroad and studying multiple languages.

The event opened with a welcome from current UMSL language students Abby Naumann, Seth Huntington and Valerie Foster. Each stepped up to the microphone in turn and introduced themselves, their studies, their study abroad experiences and their career aspirations in a different language – or two. Spanish, French, Japanese and German boomed out to the seemingly delighted crowd. Other speakers included Trapani, Associate Dean of Students in the College of Arts and Sciences Birgit Noll, Dean of the College of Arts and Sciences Andrew Kersten, Associate Provost for Student Affairs Beth Eckelkamp and others, but it was the college students that made the biggest impression.

“I liked how they started with everybody speaking different languages,” said Grace Puchalski, senior at Fort Zumwalt South High School. “It was kind of cool because we hear our teachers all the time, but we don’t really hear anybody else. Students, especially. Lots of Japanese – didn’t expect that.”

Born in Frankfurt, Germany, Puchalski moved to the U.S. when she was six and gradually lost her language skills since her family mostly spoke English at home. However, she quickly regained lost ground in her high school classes.

“I liked how involved everybody is,” she said. “I was on the fence about continuing German into college, but now I want to.”