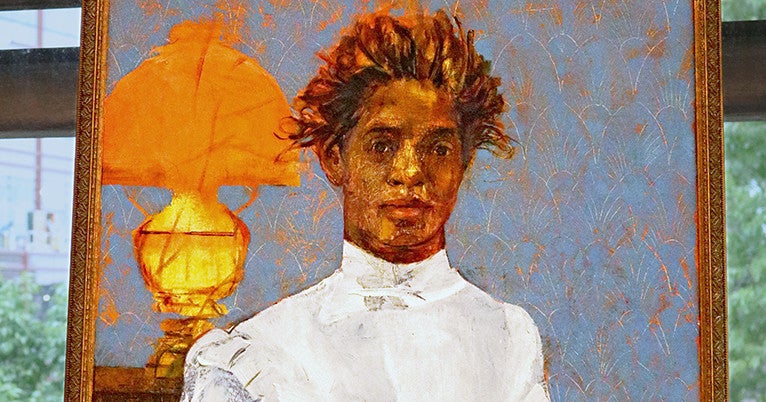 The Yale Women Faculty Forum (WFF) marked the new academic year on Sept. 21 by unveiling a portrait of Otelia Cromwell ’26 Ph.D., the first African-American woman to receive a doctorate from Yale. The portrait, painted by Jennifer Packer ’12 M.F.A., was commissioned in 2017 by WFF to honor Cromwell’s place in Yale’s history.

The unveiling ceremony was held at Kroon Hall and featured remarks by Claire Bowern, WFF chair and professor of linguistics; Vera Wells ’71 B.A., a member of the first Yale College graduating class to include women, a 2007 recipient of the Yale Medal, and the director of the Sylvia Ardyn Boone Memorial Project; and President Peter Salovey.

Born in Washington, D.C. in 1874, Cromwell began her career teaching in D.C. public schools while taking college courses at Howard University. In 1897 she transferred to Smith College in Northampton, Massachusetts, where she became the first African-American woman to graduate with a B.A. in 1900.

In 1922, Cromwell entered Yale’s Ph.D. program in English. She earned her doctorate in 1926, and Yale University Press published her dissertation, “Thomas Heywood, Dramatist, A Study in the Elizabethan Drama of Everyday Life,” in 1928. She went on to become a professor of English at Miner Teachers College in Washington, D.C. until her retirement in 1944.

Throughout her academic career, Cromwell worked to advance the cause of civil rights and racial and gender equality. In 1931 she was an editor of the pioneering text “Readings from Negro Authors for Schools and Colleges,” and in 1932 served on the board of directors of “The Encyclopedia of the Negro” as the only woman alongside W.E.B. DuBois. Her most significant scholarly work was a biography of the suffragist and abolitionist Lucretia Mott, titled “The Life of Lucretia Mott,” published by Harvard University Press in 1958.

In her artist’s statement, Packer wrote of Cromwell:

“Reading Otelia’s letters, transcripts, and essays… I was humbled by the sheer breadth of her dedication to study and compassion toward the education of her students. … This is a woman who attended, in some capacity, Howard, Smith, Columbia, and Yale universities during her lifetime, and wanted to bestow this love for learning onto others. My goal was to make a painting that, in part, could also image the respect I feel for the tasks she set out to achieve, above the difficulty of her circumstances.”