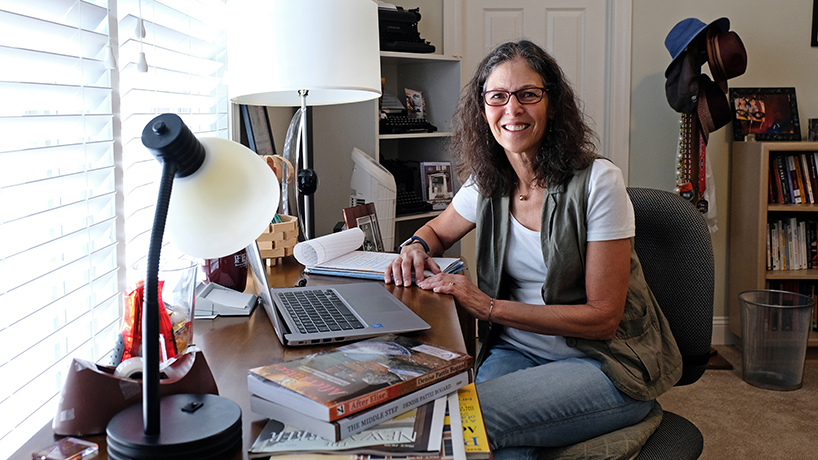 Iced-in and home alone while her husband traveled, University of Missouri–St. Louis alumna Denise Bogard reached into a drawer for her 13-year-old, abandoned MFA thesis.

Two years and much amendment later, that thesis lives on as her second published novel, “After Elise,” which Ardent Writer Press released this August. Set in Bogard’s hometown of St. Louis, the novel examines the aftermath of a fatal accident in middle-class suburbia. After skidding into and killing a stranded, young motorist, the protagonist, Teri, and her family grapple with the rippling consequences.

“I don’t know what made me pull out ‘After Elise,’ but I had always really believed in the book,” Bogard said. “But I picked up ‘After Elise,’ and I read it, and I saw the whole. And I thought, ‘OK, I’m just going to give it another go.’ I thought, ‘How many people have their first book in a drawer, most people probably,’ and many writers will tell you their first published novel isn’t their first novel. So, I reread it and really liked it again and also could see changes that I wanted to make.”

After revisions, Bogard eschewed the agent route and sent queries to 12 independent presses. The next day, a publisher in Alabama requested the entire manuscript.

“That Saturday night, we were on our way to dinner, and I happened to open my phone up, and I said to my husband, ‘I think I just got offered a contract for ‘After Elise,’’” she recalled. “It happened that fast. They read the whole thing in three days and offered a contract, so it was very exciting.”

“After Elise” is only sort-of her first-written novel. She completed one in the sixth grade, “which was basically about all the boys I had a crush on,” Bogard explained while laughing.

Though that book did not make the cut, she stuck with writing. Bogard earned a journalism degree from Indiana University and worked as an associate editor at the St. Louis Jewish Light before transitioning to public relations. Following three years as director of publications at Barnes-Jewish Hospital and the birth of her first son, she started freelancing and then cofounded a PR Agency, Bogard & Finkel Communications.

After 15 years of PR, Bogard burnt out.

“I felt like I was putting all my energy into helping businesses make more money,” she said.

As a remedy, she took a creative writing class at Washington University in St. Louis’ University College. Then another. Then, at the WUSTL Summer Writers Institute, she attended a guest lecture by then-UMSL faculty member David Carkeet, who was attempting to establish a creative writing MFA.

“I went up and introduced myself afterward, and we stayed in touch,” Bogard said. “Then David Carkeet called me because he knew I was really interested and said, ‘We got the funding, if you want to apply for the MFA program. The deadline is in a week, and you have to take the GREs before that.’ I dropped everything and crammed because I would only have to pass the English part, which was a good thing because I didn’t do anything for the math, and they should have taken my checkbook away from me with the score I got.”

Balancing work and family responsibilities, Bogard finished the program in five years by taking one class at a time. She found “immediate camaraderie” and support within the program.

“It was really exciting to be part of a brand-new MFA program, and it changed my life, literally,” Bogard said. “If I on my deathbed, when I think back to the decisions I made that were really positive and life altering, absolutely the MFA program was one.

“I learned the process of writing and, even more importantly, the process of revision. Getting that first draft down is a lot of work, but that’s not writing. The writing comes from the revision.”

After graduating, Bogard worked on “After Elise” on and off for five years with two different literary agents but was unable to sell the book. No matter because the program had introduced her to a new love: teaching. She founded and ran the St. Louis Writers Workshops for 15 years while teaching English at Lift for Life Academy. She also wrote, revised and ultimately published “The Middle Step” in the fall of 2015.

These days, she works in great floods followed by droughts, getting up to jot midnight bathroom notes when she is on and then going for weeks without writing. Bogard considers herself undisciplined compared to her teachers, like MFA Professor Mary Troy and her notorious 5 a.m. writing routine.

“Denise has never stopped writing,” Troy said. “Because we have kept in touch since her graduation, I know of her hard work and determination, her writing draft after draft, her commitment to getting it right. Thus, her success is not surprising to me and is well deserved. She has earned it.”

Bogard is at work on her next novel, as well as the audio version of “After Elise.” She recently sat down with the book’s narrator, a St. Louis-based fan who says the novel has made her a better driver. She is one of many readers who sped through the book in a handful of days and let Bogard know how much the story resonates.

“It’s fun to have readers,” Bogard said, while explaining the thrill of seeing her novel in stores. “It’s amazing to have readers. It’s such a solitary practice, and I’ve been at it so long, and all of a sudden I have people who are saying, ‘When is your next one coming out?’ and that’s kind of crazy.”