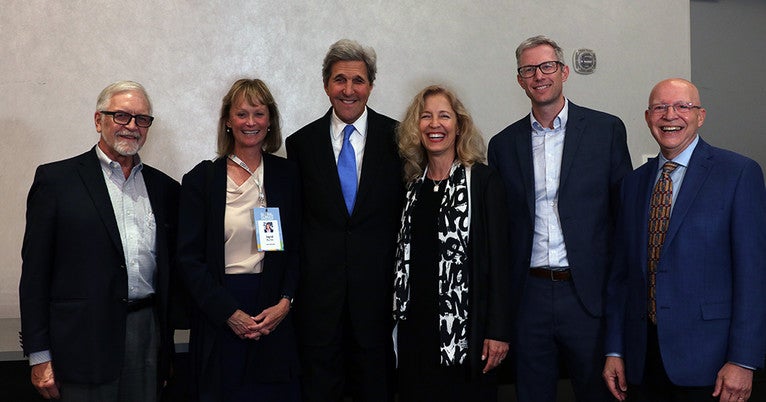 John Kerry ’66, former secretary of state and distinguished fellow at Yale’s Jackson Institute for Global Affairs, gave a keynote address calling on citizens to remain committed to addressing the challenges posed by climate change. Last fall, Kerry hosted the Yale Climate Conference on campus, part of the Kerry Initiative he is leading at Yale.

Kerry also delivered the opening remarks at the summit’s Higher Education Leadership on Carbon Pricing event, emphasizing the role of higher education in testing big ideas that serve society. The event was an opportunity for Yale to share insights gleaned from its carbon charge program.

The first of its kind at a college or university, Yale’s carbon charge is testing the impact of an internal price on emissions as part of the university’s sustainability efforts. Instituted in 2017 after an initial pilot program, it provides financial incentives to offices and departments across campus for reducing the amount of carbon dioxide they produce.

Since Yale began its carbon charge pilot study, at least six colleges and universities have implemented internal carbon pricing systems of their own. Yale, along with several collaborating institutions, launched a toolkit on internal carbon pricing in higher education at the summit. Pickett co-edited the toolkit and contributed several pieces from Yale’s carbon charge. Dylan Walsh ’11 FES and Liam Appelson ’19 contributed editing and writing support.

“Yale’s carbon charge is producing insights for institutions working to reduce emissions,” Pickett said. “The toolkit allows us to share what we have learned with schools that want to implement carbon pricing themselves.”

Yale’s leadership in carbon pricing was on display at the summit, said Indy Burke, the Carl W. Knobloch, Jr. Dean of the School of Forestry & Environmental Studies and professor of ecosystem ecology.

Yale is truly setting the standard for colleges and universities in testing carbon pricing.

“Yale is truly setting the standard for colleges and universities in testing carbon pricing,” Burke said. “This is an area where we can translate our best ideas and research into meaningful action, and it is fantastic to see Yale sharing these ideas with other institutions.

Yale alumni were well represented at the summit and affiliate events. In addition to summit co-chair California Governor Jerry Brown LAW ’64, other organizers included Frances Sawyer ’12, ’15 FES, deputy director of external affairs for the State of California Office of the Governor, and Lauren Sanchez ’14 FES, international policy director at the California Air Resources Board. Van Jones ’93 LAW moderated a panel at the summit’s opening plenary session on “Delivering the Clean Energy Economy.”

Yale Blue Green, a group for Yale alumni working in environmental fields, tracked over 40 events affiliated with the summit organized by or featuring Yale alumni.

“It was inspiring for me and for our colleagues and students to be part of this historic meeting,” said Ann Kurth, dean of the School of Nursing and the Linda Koch Lorimer Professor of Nursing. “Not only on our campus, but around the world, Yalies are working on climate issues related to health, economics, biodiversity, and more. Together we can be part of the solution to this urgent global challenge.”

Faculty-led research was highlighted at the summit. Anthony Leiserowitz, director of the Yale Program on Climate Change Communication, was celebrated as a climate change trailblazer. Yale’s interdisciplinary program brings together environmental scientists, psychologists, communication experts and others to conduct research on the public’s knowledge, attitudes, and beliefs about climate change. The research helps shape policy and media interventions.

Yale President Peter Salovey said universities have a unique and vital role to play in addressing complex global challenges such as climate change.

“Yale’s mission as a research university devoted to teaching and learning is to create knowledge and prepare our students to lead, serve, and contribute to their communities,” Salovey said. “Climate change is, without doubt, one of the most critical issues we face, and it demands our best ideas and sustained attention. That is our responsibility as citizens, scholars, and educators.”