I never met Gershom Scholem, though I could—or better still, should—have. In 1978, working on my doctorate on the encounter between Eastern European and Western European Jews, my advisor George Mosse told me that I absolutely had to interview the Master. In 1917, after being banished by his father from the family home for his opposition to the war and excessive Judaism, Scholem had lived for a while in a Berlin boarding house called Pension Struck, where he befriended leading Eastern European Jewish intellectuals, including the great Hebrew writer S. Y. Agnon, who would become his lifelong friend, and Zalman Rubashov (later Shazar), future president of Israel. He was, in fact, a living witness and participant of the cultural story I proposed to tell. But at that stage of my life, telling me to approach Scholem was akin to saying, “Why don’t you visit God?”

I stood in awe of the man whose writings flashed off the page like the holy sparks he had identified in the Kabbalah. Scholem managed to mesh the holy with the subversive, creation with destruction. He had animated a seemingly moribund tradition with messianic notions of the apocalyptic, the mythic, and the irrational, and his rereading of Judaism was informed by modernist categories—abyss, rupture, paradox, dialectic—that appealed to someone like me, who ordinarily would not have taken the slightest interest in Kabbalah. Moreover, I was aware that he was admired and feared throughout the world, in dialogue (and conflict) with the leading Western thinkers of the time. So, duty-bound but incredibly reluctant, I gingerly set about approaching him in the hope that—like the Ein Sof of the Kabbalah—he would be inaccessible. I looked in the Jerusalem telephone book (today an archaic relic) hoping that the Scholems would not be listed. Sadly, they were. Trembling, I dialed the number in the fervent desire that no one would answer (at that time one couldn’t leave a message) or that Scholem’s second wife, Fania, would come to the phone and tell me that her husband was not available. None of this happened. Instead, after one ring (or perhaps in the middle of it), a loud voice boomed out: “SCHOLEM.” In shock at hearing the great man himself, I immediately slammed the receiver down in terror, never to meet the antinomian maggid (as the Frankfurt School philosopher Theodor Adorno called him). 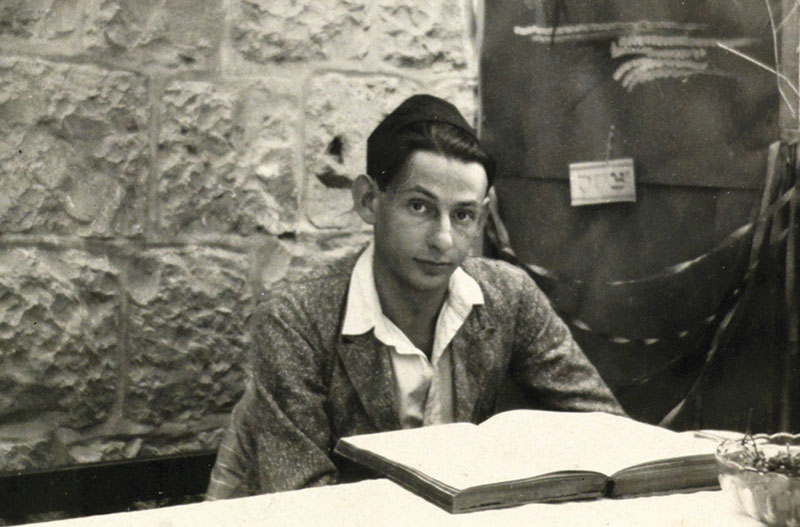 Gershom Scholem studying the Zohar on Sukkot, October 1925. (Courtesy of the National Library of Israel.)

This article is locked