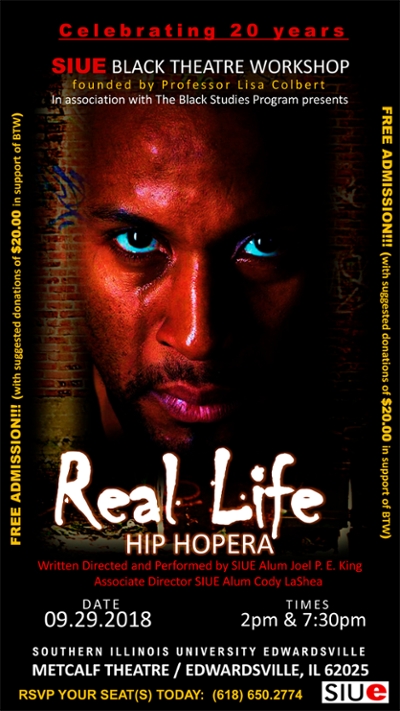 The Southern Illinois University Edwardsville Black Theatre Workshop (BTW) is marking its 20th anniversary this fall and will present the touring production of “Real Life” hip hopera at 2 p.m. and 7:30 p.m. Saturday. Sept. 29 at the University’s Metcalf Theatre.

The late SIUE professor Lisa Colbert started the BTW in 1999 as an avenue for students to create and perform theatrical work of the African-American theater canon, according to Kathryn Bentley, associate professor in the Department of Theater and Dance, BTW artistic director and director of the SIUE Black Studies Program.

“Real Life” features the original works of Joel P.E. King, director of the production, who graduated with a bachelor’s in art and a minor in music from SIUE in 2003. Original cast member Cody LaShea Aaron is the associate director, who graduated with a bachelor’s in theatre from SIUE in 2008. A live band will accompany the production, under the musical direction of Thomas Paden. The music and lyrics were written by King. Also supporting the musical cast is Adaron “Pops” Jackson, who received a bachelor’s and a master’s in music/jazz performance from SIUE in 2000 and 2003, respectively.

“Real Life” is a two-act hip hopera that explores the attitudes of urban living. The main character, Ray, has a test of faith, when he is forced to choose his morality over a sensationalized street nature that may lead to his demise. The community intervenes to influence his choice, while struggling with the threats of crime and other dangers of their daily existence. Through the power of community, acts of faith and an enduring grandmother, Ray embraces redemption, but at what cost?

“This is a powerful, riveting and relevant production,” said Bentley. “It showcases the incredible talents of some of our SIUE alumni, as well as other artists. “‘Real Life’ has been on stage across the country, including Sarasota, Fla., and Atlanta, Ga. I am more than pleased that we get to bring this hit production to SIUE.”

General admission is free, with a suggested donation of $20 in support BTW.