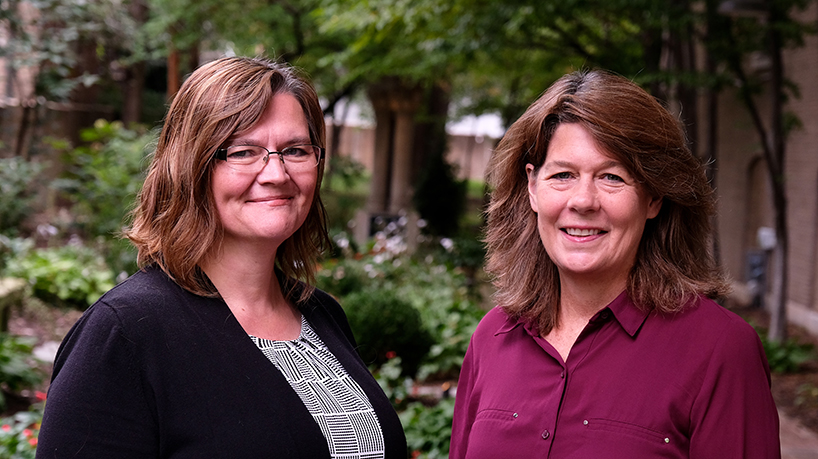 Lynelle Hinden and Sally Breen, armed with plenty of fortitude but limited resources, were scraping for anything they could find as they worked to set up an in-house clinic at DOORWAYS.

They searched eBay and found an exam table, then borrowed a truck to go pick it up. They solicited donations for medical supplies, such as bandages and saline nose spray. For approval from the Institutional Review Board, they completed reams of paperwork so involved that the clinic was only open for nine weeks out of the school year.

“What Sally and Lynelle had to do was pound the pavement and check out who has what,” said Patricia Plumley, chief program officer at DOORWAYS. “It’s like, ‘Oh my gosh, you guys are going way beyond the call.’”

Armed with their spoils, Hinden and Breen settled into a spare room in Mama/Kaya, a DOORWAYS family residential complex, which provides apartments for clients with children. The clinic, which began as a way to address medication adherence, was the College of Nursing students’ clinical scholarship projects in the DNP program at the University of Missouri–St. Louis.

The clinic was a first for DOORWAYS, a nonprofit that houses and supports HIV/AIDS patients and families. It also marked the first DOORWAYS and DNP partnership and was part of the first round of BSN-to-DNP projects accompanying the first graduating class. Breen and Hinden were two of the inaugural eight that matriculated in August.

But for UMSL’s MSN degree, 2018 was a last, reflecting a change in nurse training directed by the American Association of Colleges of Nursing, the membership organization for nursing education, which now prefers the DNP. Accordingly, two years ago, the College of Nursing started shifting, and the resulting program plays to UMSL’s strengths. Mostly online, with six three-day, face-to-face intensives, the design allows the candidates to work full-time while attending school.

Support for the switch came partially from the Health Resources and Services Administration. It awarded the College of Nursing funds to educate students to work with underserved populations with consideration for the social determinants of health, which are the socioeconomic roots of wellness. The grant helped provide implicit bias survey licensing, high-fidelity mannequins, a simulation lab and various necessary medical supplies such as suturing kits.

“The purpose of the doctorate of nursing practice is to take the advance practice nurse from the individual patient level to a systems-level thinking, so we affect populations of health and not one individual at a time,” explained Laura Kuensting, associate teaching professor and director of the DNP program. “We expand their thinking.”

“It’s called translation research,” said Kuensting. “We’re translating the research into our clinical practice and finding out if it’s really working in this population. It’s not a randomized-controlled trial; it’s not a quasi-experimental design. It’s usually something along the lines of quality improvement.”

The Mama/Kaya clinic exemplifies quality-control research. The project originated with an email Plumley received from the City of St. Louis asking if DOORWAYS would like to partner with the DNP program.

“My mind started jumping all of these places, and I’m like, ‘Oh my gosh, how many students can I have?’ because this is something that has been a dream,” recalled Plumley. “We know that a lot of our residents don’t trust very easily, and they’ve been put down so many times.” 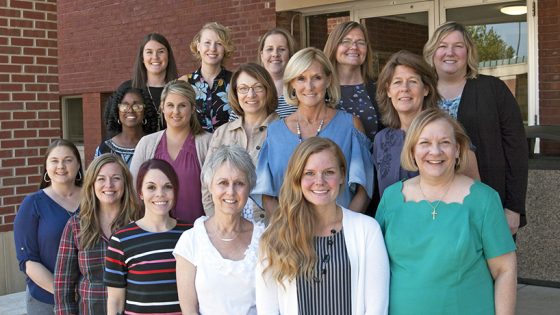 The entire August DNP graduating class posed together on colloquium day. This photo includes both the MSN-to-DNP and the BSN-to-DNP students. (Photo by Pete Broeder.)

Since the initial AIDS crisis, medication has improved to the point that patients live a normal lifespan. Managing complicating circumstances, such as homelessness, or comorbid conditions, such as mental illness or diabetes, has become almost as critical as the HIV treatment itself.

Low resources, competing responsibilities and poor experiences with health-care professionals mean that DOORWAYS residents often do not make health a priority for themselves and for their families. Plumley hypothesized that an in-residence clinic with familiar faces might be just the thing to improve their lives. She wondered if any of the DNP students would be game.

Hinden signed on immediately. She’d had a long-term interest in working with vulnerable populations and had already shed a successful private chiropractic practice and a Logan University teaching job to do so.

But Hinden knew the scope of DOORWAYS’ needs was too great for her alone. She recruited Breen, and the two got situated in a spare room in Mama/Kaya.

Hinden and Breen helped with medication compliance and adherence and recordkeeping and did checkups, and they conducted workshops on healthy lifestyles in conjunction with the St. Louis College of Pharmacy. They wooed the resident children with a coloring contest and an ice cream social. Hinden also arranged for Nike to donate tennis shoes; the company sent four big boxes with enough variety that everyone who wanted a pair got a good fit.

To differentiate their projects, the two worked on Mama/Kaya’s problems from different angles. Hinden examined DOORWAYS’ central tenet of “housing as healthcare.” She analyzed Mama/Kaya’s 29 HIV residents’ first five years of records, looking at viral loads and CD4 counts, both markers of how well HIV is contained.

“If you take someone who’s homeless and having a hard time managing their health care, especially if they have a difficult situation like HIV, and you give them a stable place to live, theoretically they should be able to manage their health care a little bit better,” Hinden said. “There was some improvement but not enough to say that there was a statistical difference from the housing alone.

“It facilitated the idea that they need more support there at the facility, and it kind of has spun off into an idea to eventually, over the next few years, put in a full-service clinic because they need a better way of tracking and monitoring their HIV care.”

The second part of the project was the clinic itself – Breen’s territory. She provided care and monitored clinic usage.

Because it ran for just 10 weeks, only six people out of 90-some residents visited the clinic. She believes a longer period of time or prescriptive authority would have improved that.

But they still made an impact on those who attended. Breen recalled one older man who came into the clinic with extremely high blood pressure who she convinced to restart medication.

“We were able to make a huge difference in his blood pressure,” Breen said. “I think our clinic showed that we can make a difference if we can gain the trust of the residents the clinic served, if we can follow through and follow up and continue to be there. We had such a short length of time. I think we could have done a lot with more time, more resources, more authority.”

Both women believe the ultimate reward is that they have started a trend: Three students with new projects will be partnering with DOORWAYS this year. One will be working at Cooper House, and two will be at the clinic.

For Hinden and Breen, the experience reaffirmed their desire to work with under-resourced populations. Hinden believes her DNP will make her more attractive to potential employers, and Breen has already accepted an offer from a rural clinic serving a reservation in Arizona.

In the context of employment, the two are pleasantly banal within their cohort. All eight DNP students passed their certification exams and received job offers, and at least half are employed. Of those employed, all accepted offers that are $8,000 – $40,000 over a new MSN graduate.

Which partially explains why the subsequent DNP class enrollment is about 70, exceeding the average MSN numbers at peak. The unique program, with its emphasis on real-life skills taught by practicing nurses, is a draw by itself.