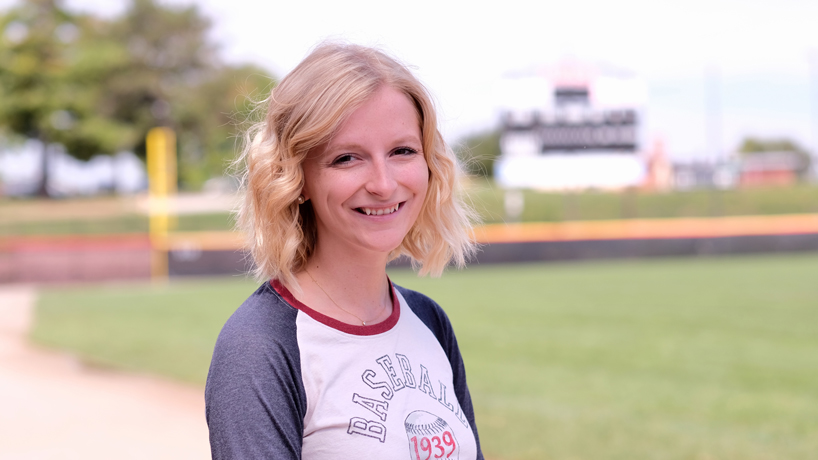 Sophie Grus earned her master’s degree in history with a concentration in museum studies in May and spent the summer working as a curatorial intern at the National Baseball Hall of Fame and Museum. (Photo by August Jennewein)

Sophie Grus was there to see the throngs of people – many of them decked out in Atlanta Braves jerseys or San Diego Padres or Cleveland Indians hats – who arrived by the busload, coming up state Highway 28 in late July to Cooperstown, New York.

She watched Main Street in the typically sleepy village morph into something more closely resembling Bourbon Street – only more family friendly – with live music and people imbibing on the roadway, which was shut down to vehicle traffic.

But Grus didn’t have to remain among the masses on her first Induction Weekend in the hallowed home of the National Baseball Hall of Fame and Museum.

She also got to be inside the building – and not just inside but in collections – where she helped give a tour to none other than Bob Costas, honored this year with the Ford C. Frick Award for broadcasters.

Grus, who last spring earned her master’s degree in history with a concentration in museum studies from the University of Missouri–St. Louis, was working in her role as the Hall of Fame’s curatorial intern as she showed Costas different artifacts.

“He was kind of like a kid in a candy store when we were in collections, just wanted to see and touch and look around,” Grus said.

She frequently observed similar reactions from less famous guests in the main part of the museum throughout her summerlong experience.

“Walking around, you saw dads with their kids telling them, ‘Oh, when I was a kid, I saw this happen or saw this player,’” Grus said. “It was really cool to see those stories getting passed down to people.”

Grus’ own interest in the national pastime developed much the same way with her father sharing his passion for the St. Louis Cardinals with her and her younger brother, Sam, as they grew up in Rosebud, Missouri, a small town located along Missouri Highway 50 about halfway between St. Louis and Jefferson City.

She developed her own love for not only the Cardinals but also the wider game. Today, her Twitter bio lists her as the “Future Commissioner of Baseball.”

One of Grus’ other passions has long been history. She decided to make it her college major when she enrolled at Missouri State University, which she first planned to use as a bridge to law school.

Grus learned early in her undergraduate experience that she wasn’t enamored with her law classes, but her desire to study history remained. She just needed to find another avenue leading to a career.

She opted to minor in museum studies at Missouri State and began exploring graduate programs after completing her degree. She eventually chose UMSL.

“One of the things that really drove me to come here is that it had a great reputation, but also I got to do a lot more hands-on stuff,” Grus said. “They placed all of the graduate students in an assistantship in a museum in the St. Louis area, so I knew that I was going to get to spend two years not just in a classroom but actually working in the field and learning.”

Grus wound up working in the American Optometric Association’s Archive and Museum of Optometry, located off Lindbergh Boulevard in Creve Coeur, Missouri.

The AOA’s museum doesn’t have public visiting hours. It serves instead as an institutional repository for the association and its affiliates with resources on the profession of optometry. Most of her work involved collections management.

While she enjoyed her time at AOA and expanded her knowledge, Grus realized over the summer that she would like her eventual career to have another dimension.

“I would say working at the Hall of Fame really reignited my passion for museums,” Grus said. “I wasn’t just working every day in an archive by myself or with one other person. I actually got to see people interact, and it really reminded me why I loved this field in the first place.”

Grus, who lived in a college residence hall in nearby Oneonta, New York, in proximity to 18 of the Hall of Fame’s other 19 summer interns, was regularly responsible for authenticating, researching and writing about the museum’s recent acquisitions – things like the bat Cardinals first baseman Matt Carpenter used during his three-homer, two-double game in July at Wrigley Field. She also wrote the labels so they could be displayed in the museum’s ever-changing Locker Room or Today’s Game exhibits.

Grus discovered some of her own favorite places in the museum’s wings, including an exhibit on one-time home run king Hank Aaron, which details his Hall of Fame career on the field and some of the things he endured off it while pursuing greatness.

“It just kind of made you appreciate him more,” Grus said, “and I always felt it was just kind of a special place to be.”

Grus returned to St. Louis after the summer ended and is currently hunting for a permanent position as a museum curator in a saturated job market. She’s been following up on some leads recently and seeing where they take her, whether it means staying in this region or moving somewhere else.

She’s just looking for her next opportunity to share her love of history and make it come alive for other people.

“I enjoy researching and writing,” Grus said. “But I also like that I get to do a little bit of interacting with the public, going on tours with them and explaining what’s going on. You get to be kind of hands on and creating what the experience is like.”