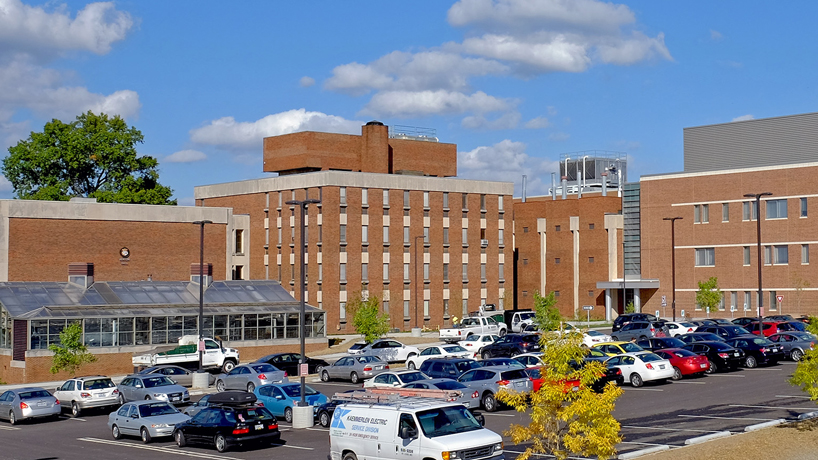 Benton Hall (center) is named in honor of Thomas Hart Benton, one of the first two men to represent Missouri in the United States Senate. He shot and killed political rival Charles Lucas in a duel in 1817. (Photo by August Jennewein)

A map of the University of Missouri–St. Louis’ North Campus pays tribute to participants of one of Missouri’s most famous feuds.

Clark Hall, Thomas Jefferson Library and the West Drive Parking Garage all stand in the middle of it – metaphorically, anyway.

The St. Louis Post-Dispatch last week shared a story from its archives: “Sept. 27, 1817: The most infamous single gunshot in Missouri political history.” It details the feud between what Thomas Hart Benton and Charles Lucas, whose names inspired two other buildings on North Campus.

As the Post-Dispatch explained in a story first published on Sept. 27, 2010, the bad blood between the two rival early Missouri legislators and lawyers began during a trial in 1816 with the two men essentially calling each other liars in court.

It got worse from there.

At a polling place on Aug. 4, 1817, Lucas challenged Benton’s right to vote. Said Benton, “I do not propose to answer charges made by any puppy who may happen to run across my path.”

“Lucas, incensed, challenged Benton to a duel. They met eight days later halfway across the Mississippi River on a lonely sandbar known to history as Bloody Island. With pistols at 30 paces they wounded each other, Lucas hurt more seriously.

“That could have ended it, but hotter heads prevailed. Lucas suggested a retry at 10 paces, then let it drop. Benton accused Lucas of spreading rumors and refused to accept Lucas’ denials. They met again on the morning of Sept. 27, 1817, on the same island.

“The result was the most infamous single gunshot in Missouri politics. A friend of Lucas who was given the task of shouting “fire” botched the command. Benton lowered his pistol and fired, the musket ball passing through Lucas’ arm and into his chest.

Lucas died from his wound. Benton, meanwhile, went on to become one of the first two men representing Missouri in the United States Senate, and his namesake great, great nephew was the famous painter Thomas Hart Benton.