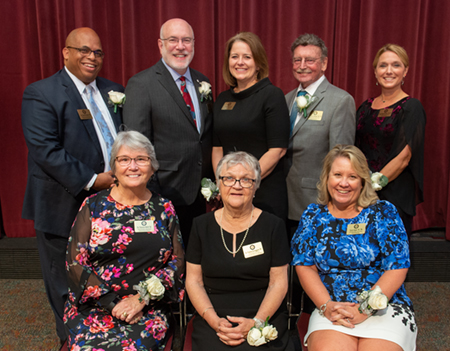 Southern Illinois University Edwardsville honored eight remarkable graduates at the 2018 SIUE Alumni Hall of Fame ceremony, “A Night Among the Stars,” on Friday, Sept. 28 in the Morris University Center. The impressive alumni have made exceptional contributions in their chosen fields, in their communities and at SIUE through their leadership, character and hard work.

“Those selected for the Alumni Hall of Fame represent the best of SIUE,” said Alan Kehrer, SIUE Alumni Association president. “It was our honor to induct these outstanding individuals in celebration of their incredible accomplishments.”

The 2018 honorees listed by their college or school: 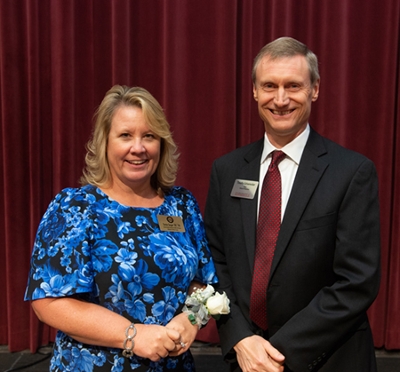 Seger is vice president and chief financial officer for Monsanto’s North America commercial business unit covering business analysis and long-range planning, credit, and manufacturing for the U.S., Canada and Latin America North. She has held multiple finance roles at Monsanto in both U.S. Commercial and Technology. Prior to joining Monsanto in 2008, she worked for Solutia as manager of corporate planning and analysis, and for Ameritech Mobile Communications where she held various roles, including director of corporate operations. Seger is also a certified public accountant and a member of the St. Louis Federal Reserve’s Agribusiness Industry Council. She is an active SIUE School of Business alumna providing presentations on career development and participating in industry networking events for students.

“One of the things that is most important to me is growing and developing new talent, just as others did for me,” Seger said. “I was empowered by the School of Business’ Janice Joplin’s ability to define and inspire leadership. I spend a lot of time in my work, taking high potential talent and stretching it. It’s wonderful to watch that talent grow and fly away.”

“I dedicate this honor to my parents and husband,” she added. “I can always hear my mom’s voice in my head, saying ‘Go get ‘em, kid. I want to see you do something big!’ My husband, Mark, has been pivotal in keeping me climbing the ladder. I very much believe in SIUE’s contributions and what it can do, and thank you all for this honor.” 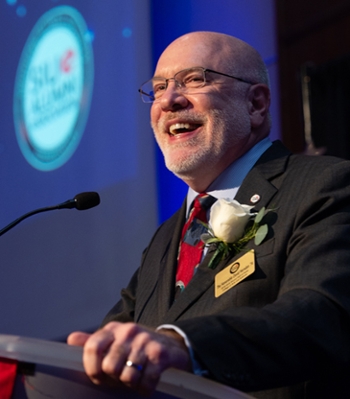 Herndon, district judge for the U.S. District Court for the Southern District of Illinois, was confirmed by the Senate on Oct. 21, 1998. His federal tenure followed seven years as an associate judge in the Third Judicial Circuit of Madison County. Prior to that, Herndon worked as a trial attorney, specializing in plaintiff’s personal injury cases, with an emphasis on Federal Employers’ Liability Act (FELA) litigation, for 14 years. An undergraduate degree from SIUE preceded his law degree from SIUC in 1977. Herndon served as chief judge from October 2007 through September 2014, and currently serves as chair of the Judicial Conference Committee on Judicial Security. He was a 2017 inductee in the Trial Lawyers’ Hall of Fame.

“It’s clear that SIUE’s reach is global, and that there’s no stopping this institution,” Herndon said. “There’s only progress, and a great deal of it. I’m proud to have graduated from SIUE.”

“During my studies, I was made to understand that whether I was talking with someone about government or the world order of things, talking with friends, or perhaps, arguing with an adversary, I have the right to an opinion. I should express that opinion and be prepared to defend it. That’s something that has carried with me all these years, and I greatly appreciate my education.” 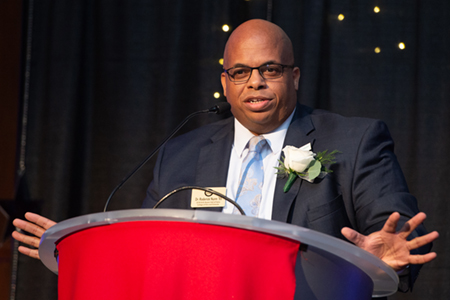 Nunn serves as executive vice president, head of education and employment for the Concordance Academy of Leadership, a national organization leading the way in reducing recidivism for returning citizens. Before joining the Academy, he served as president of St. Louis Community College-Forest Park, and vice chancellor of economic development and workforce solutions. Under Nunn’s leadership, the college won several national, state, and local awards for excellence and innovation in workforce development. He also led workforce development for three governors in Missouri and Illinois. He serves as an adjunct professor in the doctor of management program at the University of Maryland University College.

“I’ve often heard people say, ‘education is the great equalizer,’” Nunn explained. “In recent years, I’ve had to correct them by saying, ‘higher education is the great equalizer in today’s knowledge society.’ When I think about my time at SIUE, faculty and staff were the engines behind the equalization. I accept this induction in the name of all the kids from East St. Louis, Illinois, who have big dreams.”

“Part of my destiny at SIUE was the music faculty,” he added. “If you listen closely to jazz musicians, like those we heard tonight, you’ll hear innovation. They call it improvisation. If you listen closely, you’ll hear collaboration and leadership, the things I was grounded in during my early days and that were reinforced while I was in SIUE’s music program. Then, I found campus life. Wow! My involvement gave me phenomenal opportunities to develop, and learn that my ideas meant nothing without the inclusion of others. It was a wonderful period of growth for me at SIUE.” 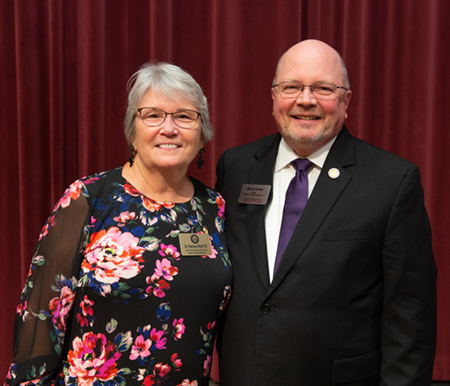 “I could not have successfully pursued the many opportunities provided to students and faculty at the SIU School of Dental Medicine, without the mentorship I received there,” Nihill said. “The School is thriving. It provides such warm feelings and a positive learning environment. I am proud of the education I received. I greatly appreciate this honor.” 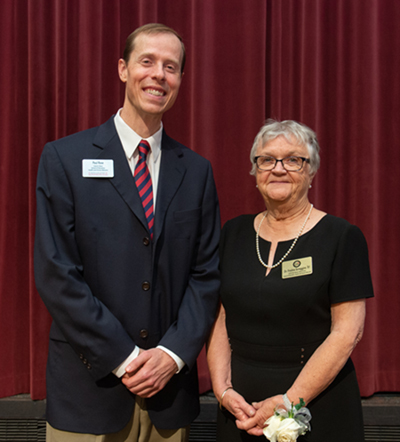 Scroggins devoted 35 years to her career in education. She is retired from St. Louis Community College (STLCC) at Meramec where she was a professor in the Department of Behavioral Sciences and served as department chair for 10 years. She taught in the teacher education program at Blackburn College, Westminster College in Salt Lake City and Missouri Baptist University, before joining STLCC. She was named to Who’s Who in America’s Teachers, received the Missouri Governor’s Award for Excellence in Teaching, and the Meramec Faculty Lecture Award. She was a member of the District Academic Governance Council, District Education Steering Committee, and the Missouri Commission on the Future of Teaching.

“If there’s one thing we’ve all acknowledged tonight,” Scroggins said, “it’s that we got here with a lot of help. None of us can say we’ve done it alone. I am grateful for this unexpected honor.”

“Throughout my career, I have learned so much from the people I have worked with and from students,” she added. “I believe that being a good teacher means being a good listener. You don’t just instruct, you are open to what’s going on with your students as well.” 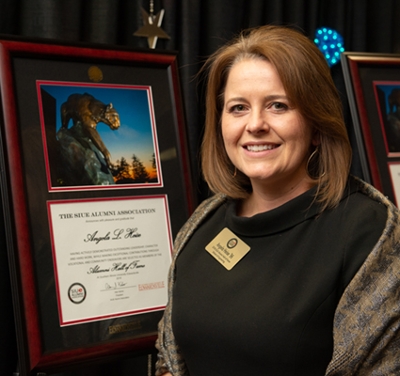 Heise is president of the civil group at Leidos. She is responsible for providing solutions to U.S. Cabinet-level civil agencies, and major elements of the public and private sector across the globe. Focus areas include air traffic automation, energy and the environment, federal infrastructure and logistics, information technology and cybersecurity, and transportation security. Prior to this role, she served as vice president of commercial markets for Lockheed Martin-Commercial Cyber, where she was responsible for delivery of a portfolio of cybersecurity and information technology solutions and services to commercial Global 1000 customers. She is an alumna of Harvard Business School’s Advanced Management Program. She was recently named to Washington Exec’s Top 25 Executives to Watch in 2018.

“SIUE gave me an unbelievable gift,” Heise said, while recalling being one of two females in her courses. “My professors always called on me when I raised my hand. They always made sure I had a voice, and they encouraged me constantly to use it and share my perspective in class. I had no idea how valuable that was, or how unusual that was.”

“I want to thank SIUE for that gift,” she continued, “because it meant I entered the professional world not knowing any different. It meant that every job I took, I raised my hand and always used my voice. I promise that for the 10,000-person company I have the distinct privilege of representing every day, I try to do the exact same thing. I give employees the same sense of inclusion, and encourage them to use their voice to make the world better.” 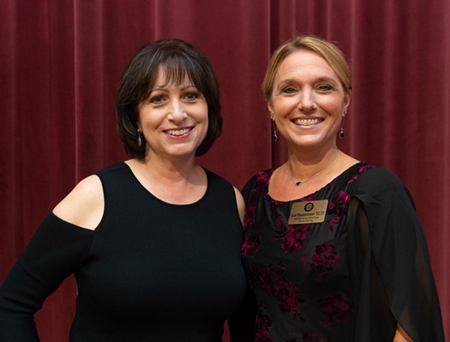 Klaustermeier serves as the chief nursing officer at Anderson Hospital in Maryville. She began her nursing career at Saint Louis University Hospital, where she quickly moved into a management position and continued there for four years. She then started at Anderson Hospital, where she has been in leadership positions for 20 years, serving as the chief nursing officer since 2009. During her tenure, she has been instrumental in mentoring staff and students, expanding and improving patient care service lines, providing leadership to more than 400 nurses and staff members, and leading performance improvement programs. An adjunct faculty member in SIUE’s School of Nursing, she is a member of the American Organization of Nurse Leaders, American Nurses Association, and Illinois Organization of Nurse Leaders where she served as a regional president.

“I’m thankful for the nursing career SIUE has allowed me to have,” Klaustermeier said. “The major takeaways for me are the mentors I gained. Professor Jackie Clement instilled in me enthusiasm and passion, and those are the two things that I always hope to bring to my organization each day.”

“I am also proud of the graduate program which offered me opportunities to utilize my work. The faculty was interested in what I was working on, and I was eager to learn and expand my knowledge.” 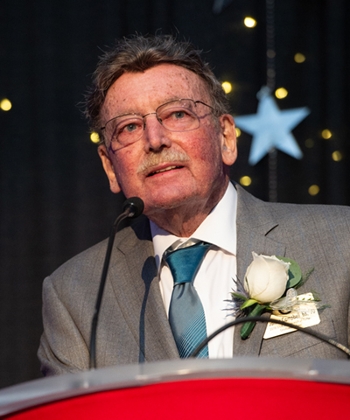 Campbell earned a doctorate in sociology from the University of Missouri-Columbia (UMC). He began his career as an instructor in 1970 at Coe College in Cedar Rapids, Iowa, but spent most of his career in the Department of Family and Community Medicine at UMC, where he recently retired as emeritus professor. He was a pioneer in developing innovative curricula for medical students that incorporates the social and behavioral sciences. He played a key role in developing and implementing an innovative longitudinal inter-professional experience at UMC, as well as developing videos that are used widely for training in educational institutions and public health departments. He and his wife, Anne, were instrumental in creating the Central Missouri Kidney Association, of which Jim is the president.

“I want to share a couple serendipitous moments in which SIUE was instrumental,” Campbell said. “I met my wife in statistics class in Peck Hall in March 1967. Later, I was teaching at a college that I never applied to, and I’m grateful SIUE had provided the foundation for me to have the confidence and ability to succeed those first few weeks of teaching.”

“I am honored to receive this award, but more than that, I am particularly thankful to SIUE for scheduling that statistics class. I really appreciated it.”