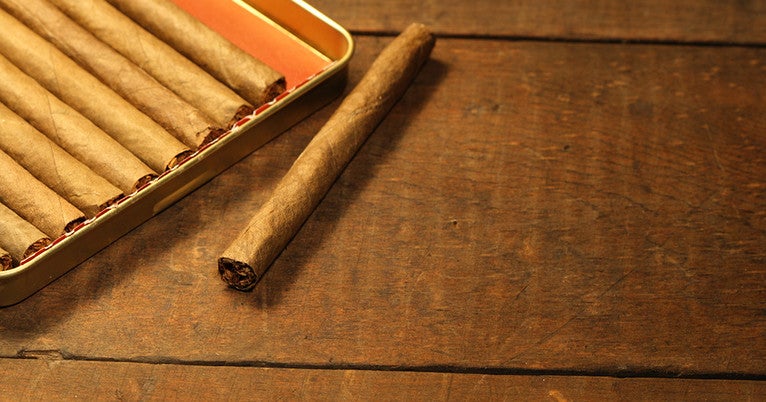 In a new study, Yale researchers found that popular brands of cigarillos are flavored with high-intensity sweeteners, potentially reducing the aversive sensation of smoking and making cigarillos more palatable. The concern is that these sweeteners encourage young people to smoke cigarillos.

Cigarillos are small cigars that have become increasingly popular in recent years. Only slightly larger than cigarettes, cigarillo flavors aren’t subject to the same restrictions in the U.S. as cigarettes. Adding any flavors other than menthol to cigarettes is not allowed. In contrast, cigarillos come in a wide variety of flavors — one of the reasons the products are especially popular among youth.

The study, published today in the Journal of the American Medical Association (JAMA), found that high-intensity sweeteners — chemicals such as sucralose, which can be hundreds of times sweeter than sugar — were present not only in cigarillos labeled as having “sweet” flavor, but also in cigarillos with “classic” cigar and fruity flavors such as “grape.” The researchers analyzed the six most popular brands in the U.S., which account for 90% of the national cigarillo market. For each brand, they tested at least one product that featured a “sweet” flavor, a “classic” flavor, and where available, a fruity flavor such as grape. The project was a collaboration between the lab of Julie Zimmerman, professor of chemical and environmental engineering, and the Yale Tobacco Center of Regulatory Science (TCORS) in the department of psychiatry, with support by Sven Jordt at Duke University.

Of the 31 cigarillo wrappers examined, 29 had high-intensity sweeteners in all tested flavors. Using table sugar as the standard of sweetness, the researchers found that 74 percent of the analyzed cigarillo wrappers were sweeter than a sugar-free candy. Sweeteners were found predominantly on the mouth end of the cigarillo, creating an easy route to the user’s taste buds.

“Once these compounds reach the tongue and thereby the taste buds, they create a sweet, pleasant, and possibly rewarding taste that can mask the bitter taste of nicotine and tobacco,” said first author Hanno Erythropel, a postdoctoral associate in Zimmerman’s lab and a trainee in TCORS.

The concern, said co-author Stephanie O’Malley, is that flavors in tobacco products not only encourage young people to start using these products, but to continue using them by reducing the harsh, bitter taste that often keeps one-time users from smoking again.

“Nicotine is addicting, but you have to expose yourself repeatedly to become addicted,” said O’Malley, professor of psychiatry. “The initial use of these products can be aversive, and things like sweeteners can make them less so.”

The Food and Drug Administration is considering expanding the current ban on flavors in cigarettes to cigarillos and other cigars, and similar efforts exist in several states and cities. The researchers note, though, that such regulations currently extend only to flavors and not high-intensity sweeteners. The researchers say they hope the study’s findings will inform regulatory policies with the goal of preventing Americans from becoming addicted to nicotine.

Research reported in this publication was supported by grant number P50DA036151 from the National Institute on Drug Abuse, part of the National Institutes of Health (NIH) and the Food and Drug Administration’s (FDA) Center for Tobacco Products (CTP). The content is solely the responsibility of the authors and does not necessarily represent the official views of the NIH or the Food and Drug Administration.