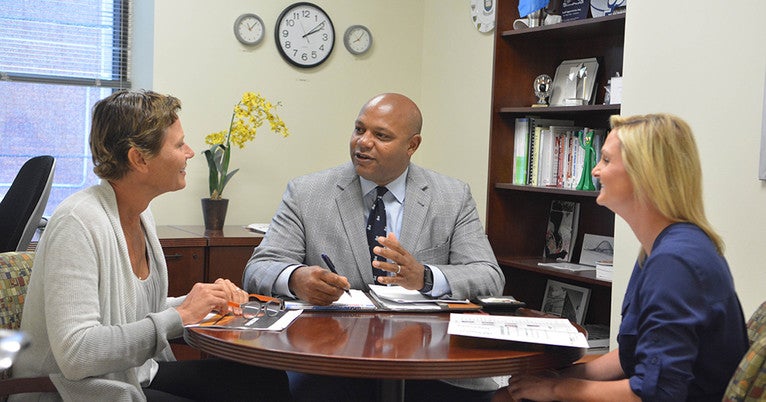 Yale’s New Haven Community Hiring Initiative has been helping members of the New Haven community find jobs at the university by developing talented, local candidates to fit a variety of open positions. Chris Brown, director of the initiative, recently met with YaleNews to discuss the program’s goals and successes. The following is an edited transcript of that conversation.

What is Yale’s New Haven Community Hiring Initiative? When was it launched, and how does it fit into Yale’s history of hiring New Haven residents?

Yale has long been committed to the strength and health of the city of New Haven and its economy. The hiring initiative was created in 2012 after the alders, the city, the university, the unions, the Chamber of Commerce, and the hospital all got together to talk about what could be done about unemployment and poverty, particularly in New Haven neighborhoods with the highest rates of joblessness. The result was the creation of New Haven Works, a nonprofit committed to helping New Haven residents get into full-time, well-paying jobs here in the city across many organizations, such as Yale, the City of New Haven, and Yale-New Haven Hospital.

To help facilitate that hiring of New Haven residents here at the university, the New Haven Community Hiring Initiative was formalized. Today, the hiring initiative serves as the liaison between Yale’s staffing department and the community partners, including New Haven Works. Diane Turner was the inaugural director of the hiring initiative when it started in 2013. I took over in 2015 upon her retirement from Yale after 37 years. In my role, I partner and strategize with our staffing team in Human Resources to recruit and develop New Haven residents as candidates for Yale jobs.

Why is it important to Yale to employ an increasing number of New Haven residents?

Yale is the largest employer in New Haven. Right now, almost one third of the people — 6,550 out of 20,000 who work here at Yale — are residents of New Haven, and we find that makes such a huge difference to our city. For Yale, employing so many New Haven residents is about the “social well-being of New Haven.” It adds to the economic and social fabric of the city.

At the hiring initiative, our north star is President Peter Salovey and the goals he set after his 2013 walking tour of campus and the city when he asked the various communities, “What’s working with Yale? Where are we getting stuck? What should we be doing differently?” He took all the feedback and boiled it down to four points: President Salovey said that during his presidency, he wants Yale to be more accessible, innovative, unified, and excellent. When I think about what the hiring initiative can do for both Yale and New Haven, I always return to those four points.

If you’re a resident of New Haven, we encourage you to reach out to New Haven Works, which will sign you up, assign you a job coach based on your career path, and work with you to develop your career goals — all free of charge.

How does the hiring initiative work in tandem with New Haven Works?

We depend on New Haven Works to refer qualified New Haven candidates for our frequently filled positions. If you’re a resident of New Haven, we encourage you to reach out to New Haven Works, which will sign you up, assign you a job coach based on your career path, and work with you to develop your career goals — all free of charge.

As our partner, New Haven Works has a good understanding of the kinds of jobs that we frequently fill. Generally, those most prevalent roles are administrative, financial, clinical reception, research, hospitality, and facility jobs. New Haven Works is very well-versed in the requirements and descriptions of those jobs, and the way the hiring initiative works. Once a candidate is connected to New Haven Works and has identified a Yale job as one of their goals, then we are able to share feedback with New Haven Works about the candidate’s resume or cover letter, and what our recruiters and hiring managers/departments are looking for. Our goal is to support them in being able to put their best foot forward as they progress through the recruitment process.

For the past few years, we’ve been partnering with New Haven Works to host something we call a “meet and greet” a couple times a month. New Haven Works invites anywhere between 8 and 15 of their clients to their office, and I come over with a handful of people from our team in the Yale staffing department — which might include a couple of recruiters and a candidate development specialist — to meet these potential candidates. At these events, people get a chance to sit with Yale’s staffing representatives, talk about their backgrounds, and practice their interviewing skills in a friendly and supportive environment. They are also able to ask questions of our recruiters, and our recruiters are able to get to know the candidates and their skills, abilities, and interests.

We hope these sessions help clarify our hiring process for applicants. We’ve found this direct conversation about employment and how it works to be so helpful to applicants. At an early meet and greet, for example, we met a young woman who’d been applying to Yale for six years or so. She kept getting turned down or not hearing back, and she was about to give up on the idea that she should work at Yale. We asked what kinds of jobs she’d been applying for and she said administrative. But then she showed us her resume, which was great overall, but we noticed that if a hiring manager saw it, they might read it to mean she should be in a procurement position, not an administrative job. We told her how to better highlight her administrative skills going forward.

The very next week, she was able to qualify for a Yale administrative job, interview for it, and in about a month’s time, she was hired here. That’s just one example, but there are so many others exactly like that — where people had good skills, good backgrounds, but they needed to refocus and repackage their application, and after they did, things worked out.

Can a job-seeking New Haven resident take advantage of the hiring initiative without becoming a New Haven Works member?

Yes. People often go through New Haven Works if they’re residents of New Haven, but not everyone chooses to do so. Some residents feel like they don’t need a coach or assistance with their job search, so in those cases, we encourage them to apply directly to positions that are posted in STARS, Yale’s online hiring and recruitment system.  Our team routinely goes through STARS to look for New Haven candidates and then reaches out to them to learn more about their backgrounds and the kinds of roles they are interested in.

Does the hiring initiative have any collateral benefit for New Haven-based employers besides Yale?

A goal of mine is that other employers in the city also benefit from the work Yale is doing with the hiring initiative in tandem with New Haven Works. I encourage other employers to connect to us to talk about how easily and quickly they can find a lot of great candidates who already live in the city, whom they might have overlooked at first pass because, for example, their resume didn’t highlight the skills that fit the job they were applying for.

A good candidate is someone who’s … thinking hard about what [they’re] really interested in, what skills [they] bring to the table, and then looking at our jobs to see what closely matches up.

How can someone make themselves the best candidate possible for a Yale job?

A good candidate is someone who’s doing their homework, and I don’t mean learning about Yale and its history. No, the homework is thinking hard about what you’re really interested in, what skills you bring to the table, and then looking at our jobs to see what closely matches up. We encourage all prospective candidates to go into STARS and search with key words that mean something to them. You could put in “administrative” or “athletics” or “customer service.” Then when you see what comes up and what kinds of roles appear most frequently, that might help direct you to positions that are the best matches for your interests. Yale has everything under this one roof that a job applicant could possibly think of; quite frankly, I myself have never been able to come up with a kind of job we don’t have.

At the hiring initiative, we also partner with New Haven Promise, which was founded in 2011 and gives Yale-funded college scholarships and internship opportunities to New Haven public school students with great attendance, great grades, a record of community service, and a desire to attend college. Their motto is “To, through, and back.” To college: They want to get you there. Through college: They’ll keep giving money and support. And back: They want to get you a full-time, well-paying job in New Haven after graduation.

At the hiring initiative, we see ourselves as the “back” part of the promise. Over the past five years, we have hired over 300 New Haven Promise interns into positions in over 32 departments across campus. New Haven Promise is our newest and best pipeline for hiring New Haven residents. This summer, we had 94 interns, and within the first three weeks of their summer internships, at least two of them got offers for full-time jobs at Yale.

The need and commitment to hire New Haven residents does not end. When I talk to people and tell them about my job, I tell them that our initiative doesn’t end in April 2019. We are committed to continually finding qualified New Haven residents to bring into our employment process. When our hiring managers wonder where the great talent will come from in the future, they know that it’s already here, in our own backyard.