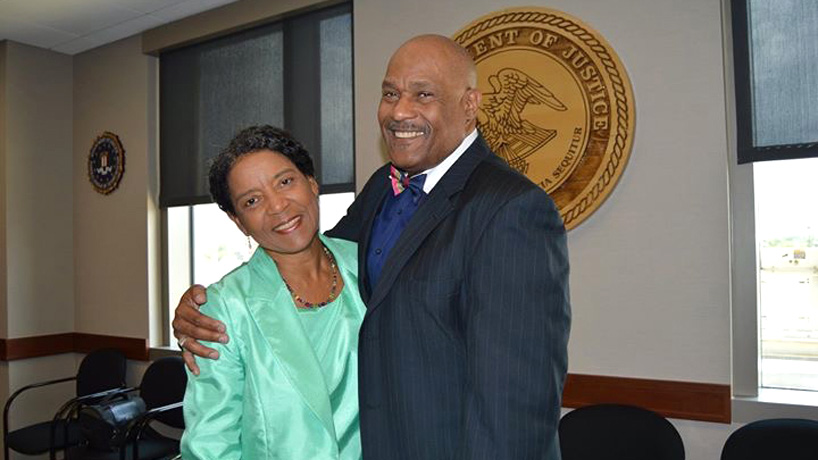 College of Business Administration alumni Stephanie and Charles Wright celebrate Stephanie’s retirement as an assistant U.S. attorney for the Northern District of Iowa during a celebration on July 30. (Photo courtesy of Stephanie Wright)

On a warm August day in 1972, Charles Wright sat in a University of Missouri–St. Louis library feeling utterly miserable.

He attempted to study for his summer courses, but his efforts were useless as he could only think about a woman he had met a few days earlier. His love interest, Stephanie, was in class across campus feeling equally pitiful thinking about her unrealized engagement to Charles.

The young couple had not known each long but already shared an undeniable connection centered on their faith, desires to travel and career aspirations. Charles realized this bond in a matter of hours and proposed to Stephanie on their first date, a week after they met on campus.

“He was looking for a wife, I think, and felt like I fit the bill,” she said with a laugh. “We did have a lot in common. I wanted to work for an airline, and he wanted to be a pilot. We were both majoring in business and wanted to travel. We had all these commonalities, so I thought about it and agreed. But we later decided this would be too fast and were going to call getting married off.”

After choosing to wait, Stephanie and Charles continued with their summer studies and headed to their separate campus locales. But sitting in the library unhappy and unable to focus, Charles attempted one more romantic gesture.

“When he went to the library and I went to class, we both felt an emptiness,” Stephanie said. “I think that’s the best way to describe it. We just felt empty. He came to meet me as class was over, and we said ‘We’re going to do this.’”

They decided to elope to East St. Louis, Illinois, and called the first pastor they could find in the phone book. The minister agreed but had one condition if they wanted to marry that day: Stephanie and Charles would have to meet him at his funeral parlor where he was working that afternoon.

Eager to finalize their commitment, Stephanie and Charles approved the venue, bought a $10 gold band from a pawnshop and married three weeks after meeting.

More than four decades later, the couple has raised two daughters and established independent careers: Stephanie as an assistant U.S. attorney in the Northern District of Iowa, and Charles as the founder of Charles George Missions Inc., a Christian ministry with an international reach.

Today, the Wrights are retired but maintain a quick pace in their day-to-day lives.

Stephanie’s last day working as an assistant U.S. attorney was on July 31. Since then, the Wrights have started moving to Virginia, planned their next mission trip and Charles has been working on a Master of Arts in Ministry degree from Ohio Christian University.

“Our lives have really changed recently, but we don’t want any grass growing under our feet,” said Charles, who retired as a post office supervisor seven years ago. “We’re still traveling. We’re still growing. We’re still developing. We’re still getting educated. Golly, there’s a lot of living to do if you want to live.”

The Wrights have adopted this mantra for much of their marriage, embracing career moves that took them to new states and encouraging each other to pursue personal and professional ambitions. Over the years, they have reshaped their lives for each other. Stephanie moved to Texas and then the small community of Waverly, Iowa, for Charles’ career. And Charles inspired Stephanie to take jobs and attend law school out of state while he cared for their children in Iowa.

“Because we had two daughters, I wanted Stephanie to be out front so that she could pave the way and show them that they could do something with themselves and with their lives,” Charles said. “I didn’t have any sons to impress, so I stood back and continued to work.”

Their daughters hold degrees from Pennsylvania State University and Virginia Polytechnic Institute and State University. The older child has a PhD and is a professor at Duke University, and the younger is a human resource manager for a major company in Virginia.

Stephanie was 38 when she left the business career she built at John Deere and Navistar International to start at Lewis & Clark Law School in Portland, Oregon. She had always been curious about the legal system after observing her mother’s career as a court reporter and thought a law degree would provide a sense of job security other professions couldn’t match.

Upon graduating and passing the bar exam, Stephanie had ambitions of practicing in federal court. She lived that dream for 24 years, serving as the first African-American assistant U.S. attorney for Iowa’s northern district.

During her tenure, she worked extensively on civil rights issues and cases centered on compliance with the Americans with Disabilities Act.

“I’ve taken a great deal of inspiration and encouragement from the ADA cases that I have done,” Stephanie said. “They don’t get a lot of attention, but it has been a big help to a lot of people. The ADA has been around since 1990, and people are still not compliant. It’s really kind of sad.”

While Stephanie logged an impressive law career, she also helped her husband establish Charles George Missions Inc. in 2004. Their work with the media and missions ministry connected their spirituality and desire to travel, which have always been integral parts of their relationship.

“The things that we talked about when we first met are the things that still connect us today,” Stephanie said a few weeks after celebrating her 46th wedding anniversary. “God has been the focal point of our marriage. We’ve always emphasized the importance of having the Lord in our lives because without the Lord in our lives, we are confident this marriage would not have lasted 46 years.”

The Wrights have shared their faith and video production services in Africa, Europe, Asia and the Caribbean. Their individual pilot licenses, which Stephanie acquired and then convinced Charles to obtain, assisted on their first mission trip to the Philippines. They flew an aircraft across the South China Sea to remote Philippine islands, where Charles was the first nonnative to preach in five different churches.

While Charles is an ordained pastor, he’s eager for an advanced ministerial education. He observed Stephanie and his daughters pursuing their educational ambitions over the years and now has his opportunity.

“My dream has always been that my children would do better than I,” Charles said. “I just started going back to school for my master’s. After my undergrad, I earned certificates and ordinations, but I wanted a more formal education. Stephanie’s now supporting me there.”

As they begin a nontraditional retirement together, the Wrights are thankful for the start UMSL provided in their relationship and professional endeavors.

“Going to school at UMSL helped open a lot of doors for us. Doors we didn’t expect to open or know to open,” Charles said. “Our education provided a strong foundation and gave us a lot to build on.”