‘If we don’t want chaos, we must choose community’ 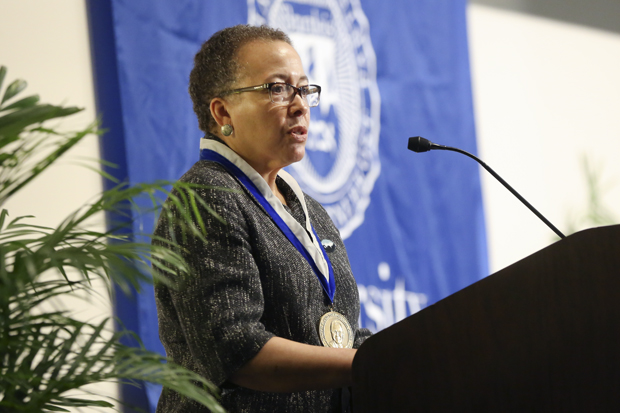 Beverly Daniel Tatum was formally honored with the Joseph B. and Toby Gittler Prize and delivered a lecture on the Brandeis campus Wednesday that made the case for structured dialogue as a tool to build empathy across racial divides.

“Some people believe that talking about race will make things worse, that those who bring it up are playing the race card, creating problems where otherwise there would be none,” Tatum said. “Silencing the conversation, however, is just another way to maintain the status quo. You can’t solve a problem without talking about it.”

The lecture, “Closing the Empathy Gap: Community Building through Dialogue,” was inspired by Dr. Martin Luther King’s final book, “Where do we go from here?” in which King described a need for white America to develop altruism and empathy for the anguish of others in order to create a truly integrated society. Tatum outlined a combination of growing economic distance between races, persistent segregation of neighborhoods and schools, and record-high rates of incarceration of the black American population that has resulted in an empathy gap between races that may be as profound as it was when King died in 1968.

Tatum said people committed to social change must continue to expose institutional racism, create opportunities to tell their own stories in environments where there is a commitment to listen, and to take action together.

“If we don’t want chaos, we must choose community,” she said. “We must choose to listen, even to the stories that are hard to hear, and close the empathy gap, working for lasting change so we can all enjoy the fruits of our democracy as a united community, together.”

Tatum is a renowned authority on racial identity and resegregation in America. She served as president of Spelman College in Atlanta, Georgia from 2002 until her retirement in 2015, and is the author of several books, including the acclaimed “Why Are All the Black Kids Sitting Together in the Cafeteria? And Other Conversations About Race.” 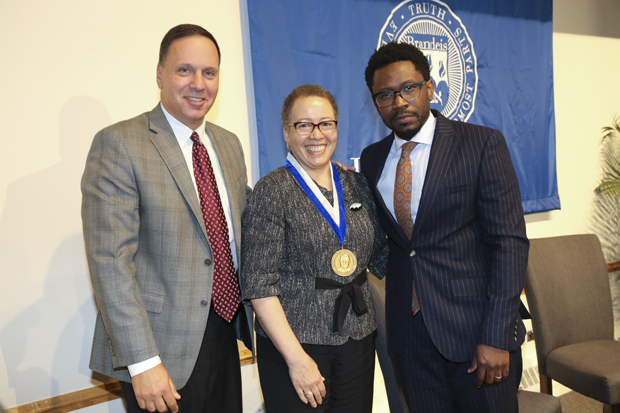 The lecture was part of a visit to campus for two days of events and engagement with Brandeis students and faculty. She was introduced to a capacity crowd inside Sherman Function Hall by Assistant Professor of Education and Sociology Derron Wallace.

“In Dr. Tatum we find a dynamic leader who is as committed to ideas as she is to process, to change as she is to charity, to engagement with public schools to she is to leadership in America’s colleges and universities. Dr. Tatum is a model for us all.”

The Joseph B. and Toby Gittler Prize was created in 2007 by the late Professor Joseph B. Gittler to recognize outstanding and lasting scholarly contributions to racial, ethnic and/or religious relations. It is named after Gittler and his mother, Toby. The Joseph B. and Toby Gittler Endowed Fund at Brandeis University supports this annual award that also includes a $25,000 prize and a medal. Previous Gittler Prize winners include Kimberle Crenshaw (2016), Martha Minow (2015), Gustavo Gutiérrez (2014) and Patricia Hill Collins ’69, PhD ’84 (2013). The prize is hosted by the International Center for Ethics, Justice and Public Life on behalf of the Office of the President of Brandeis University.

Prior to her remarks, Tatum was presented with the Gittler medal by Brandeis President Ron Liebowitz.

“In honoring Beverly Tatum, the university makes an important statement about values associated with both the Gittler Prize and the university, such as the importance of positive intergroup relations, social justice and leadership,” Liebowitz said. “We know Dr. Tatum’s residency will serve to inform conversations about race at Brandeis itself, and support student leaders and faculty and staff partners as they continue to examine how our own institution examines addresses critical issues around race and diversity.”