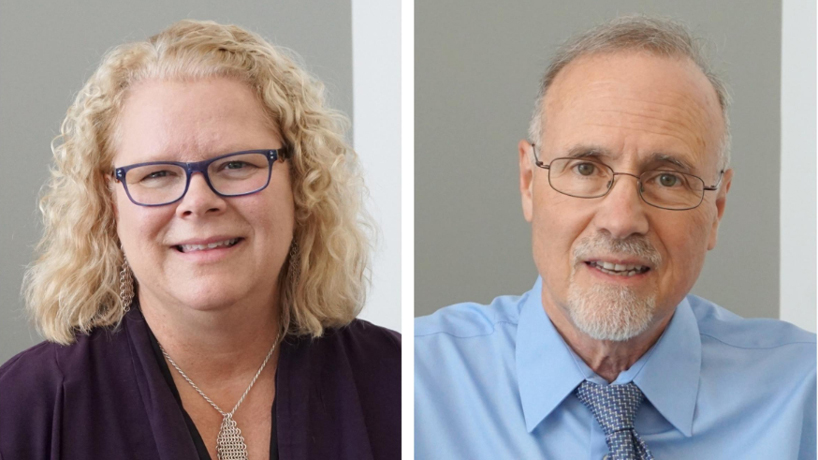 Provost Kristin Sobolik (at left) and Chancellor Tom George appeared on “St. Louis on the Air” Wednesday to discuss the brighter outlook at UMSL with a stabilized budget and new strategic plan for the next five years. (Photos courtesy of Evie Hemphill, St. Louis Public Radio)

It wasn’t even three years ago that Chancellor Tom George appeared as a guest of host Don Marsh on “St. Louis on the Air” to discuss what then seemed an uncertain future for the University of Missouri–St. Louis amid a $15 million budget shortfall.

George was able to share a much brighter picture of where UMSL is headed when he returned to the show Wednesday with Provost Kristin Sobolik at the St. Louis Public Radio | 90.7 KWMU studios at UMSL at Grand Center.

“We have stabilized the budget, and now for the last two years, we’ve actually had a surplus going into the next fiscal year,” George said. “What we’re working on now is growing resources, so we want to get ourselves back to where we were three or four years ago.

“We’ve lost about 1,000 students. We want to get those students back, and there’s some other ways we can help ourselves get the revenue back to where we want it to be.”

Careful decision-making over the past few years and finding ways to be more efficient have left the university on sounder footing as it plots a course for the next five years with the rollout of a recently approved strategic plan.

“It reflects where we want to be and what we want to do and focus on over the next five years,” Sobolik told Marsh. “That, of course, focuses on our people and on our students in particular. We have a compact for student success where we would like to increase not only the number of students that we have on campus – which will help our region, as well – but also on their particular success with regard to graduation rates and retention.”

Sobolik said UMSL is already on the right track toward achieving some significant goals outlined in the strategic plan. She noted that the university’s six-year graduation rate already has risen by nearly 15 percentage points in the last few years, and UMSL has also increased retention rates for all students, including Pell Grant-eligible students and students from underrepresented communities.

“We absolutely need to keep on the same trajectory but also double down to the things that we’ve found that have been successful,” Sobolik said.

Through the strategic plan, UMSL is also renewing its commitment to community engagement and contributing to the economic strength of the St. Louis region.

“That’s something that we already do very well, and you know that Don, not just from interviewing me and Kristin but all the wealth of people from around campus that you interview,” George said. “But that’s part of our charge. We’re part of the land-grant university system, and part of that is to be an anchor in our region and to reach out to the community. I tip my hat to the faculty and staff that do this.”

He noted that UMSL is joining with the St. Louis Regional Chamber of Commerce and other institutions of higher education – both public and private and two- and four-year – around the area to increase the number of people with college degrees. Those efforts will bolster the workforce through the region.

On the UMSL campus, the Public Policy Research Center has been reinvented as the Community Innovation and Action Center to support St. Louis’ nonprofit community and help its members forge bold and innovative programs, organizations and collective efforts to address the area’s biggest challenges.

To listen to Marsh’s whole interview with George and Sobolik, click here.