A bedside visit with a young woman with cystic fibrosis in 1999 still looms large in the mind of Marty Burke. Then an MD/PhD student at Harvard University, Marty offered a detailed explanation—right down to the molecular level—about why her body insisted on creating the sticky mess that clogged her lungs and robbed her of air.

“If you know how it’s happening,” she pressed, “then why can’t you fix it?”

Marty has recounted this story dozens of times over the last almost twenty years, and the answer to this question has always been the same: we don’t know.

Rather than discouraging him, that deflating response has only sharpened his resolve to find the answer, not as a physician but as a research scientist.

Today Marty commands a good section of the fourth floor of the Roger Adams Lab. The sign above the doorway to his office says, “The Lab of Molecular Prosthetics.” He and his students are working to create those molecular prosthetics—molecules that achieve a close approximation of ones that are damaged or ineffective, not unlike how we think of prosthetic arms and legs. Molecules, Marty hopes, that will be able to help patients like the one he met so many years ago. 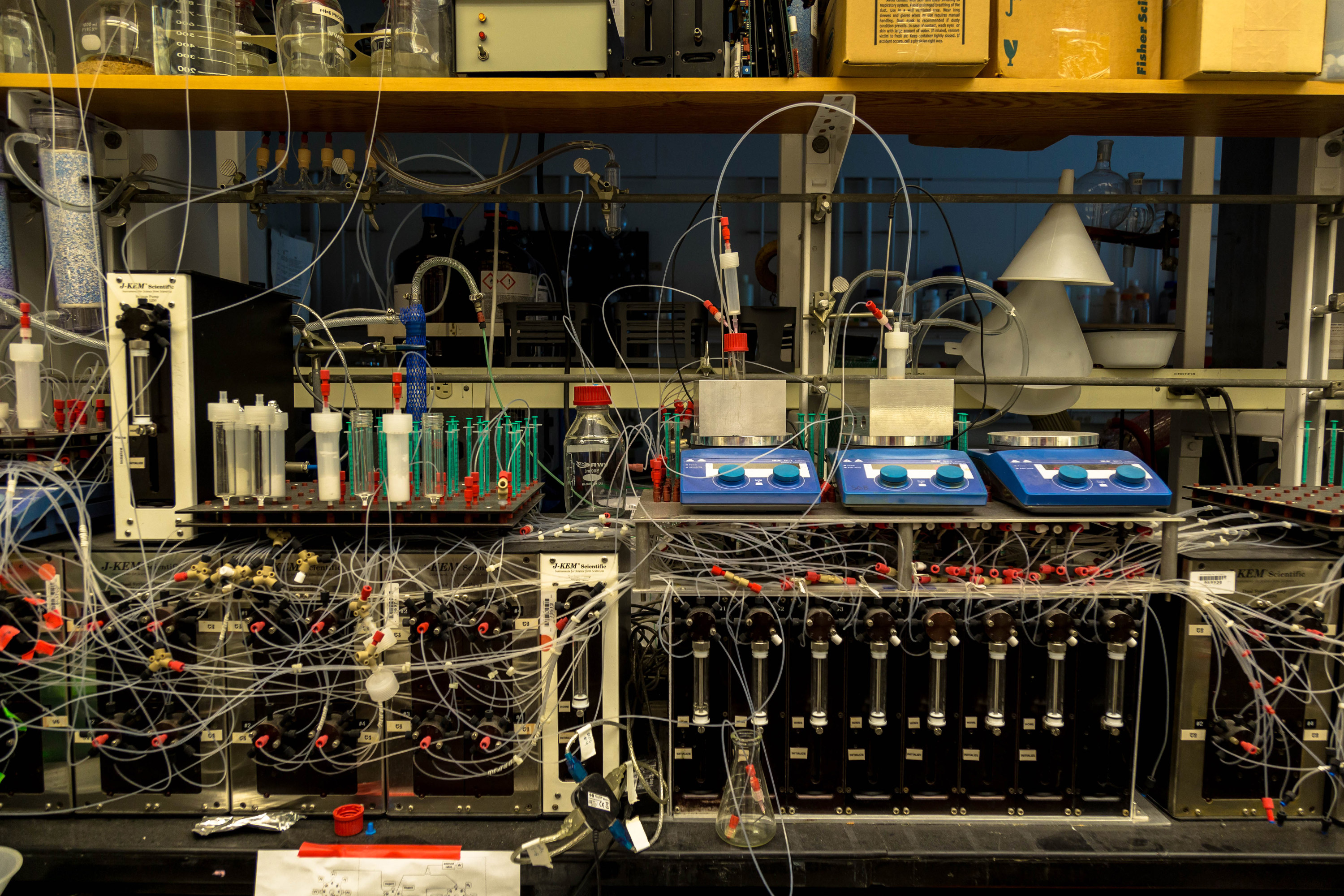 Marty dreams of adding more of these molecule-making machines to a Molecule Maker Lab at Beckman Institute.

The walls are lined, ceiling to floor, with artwork from his two young sons—these playful, imaginative renderings acting as constant reminders to embrace simplicity and explore creativity.

And now, after many years away from medical school, Marty finds himself returning, this time as associate dean of research at the Carle Illinois College of Medicine.

“It’s an incredible opportunity for the whole world. I think Carle Illinois College of Medicine is going to transform medicine as we know it. Mark my words,” he says. “It’s going to be a revolution from our own borders. I think it’s that blank slate that gives us the chance to do something totally transformative.”

We wanted to get to know Marty a little better, so we’ve asked him to answer an abbreviated version of the Proust Questionnaire for STORIED. Once a popular Victorian parlor game made famous by Marcel Proust, the Proust Questionnaire has been used by reporters over the century and across the globe to reveal a side of leaders, artists, actors, and public figures we may not usually see. You might recognize the format from the back page of Vanity Fair, which has had celebrities answer the questions since 1993.

What is your idea of perfect happiness?
Carefree moments of joy with my family and friends. Professionally, I’m happiest when I’m struggling trying to solve a problem.

What is your idea of misery?
Being in a really tough situation and not being able to affect the outcome.

Which talent would you most like to have?
Creating time

What is the quality you admire most in a person?
Sincerity

Who are your heroes in real life?
Christina White, Michael Jordan, Emily Kramer-Golinkoff

Who are your heroes throughout history?
Johannes Gutenberg, Paul Ehrlich, Steve Jobs

What is your most treasured possession?
Time

What is your motto?
“Anything that doesn’t violate the laws of physics is possible.” It’s one of the many inspiring and empowering things I learned from my PhD advisor, Stuart Schreiber.

What motivates you?
Impact. I think I had my “midlife crisis” when I was 22 years old, as a first-year medical student taking anatomy and pathology at the same time, and came to grips with the whole mortality thing. Ever since, I’ve tried to find the most potentially impactful problems I think I might be able to solve, and then gone all-in.

Which words or phrases do you most overuse?
“Building the plane as we fly it,” “strong work,” “laser-beam focus”—at least that’s what my students tell me.

What do you consider your greatest achievement?
My students and I discovered that small molecules can replicate the functions of missing proteins and thereby restore physiology in animals. This has illuminated an actionable path to “molecular prosthetics,” which we hope will be a new class of medicines that can treat diseases caused by missing proteins in people. We are also really excited about our progress toward a simple Lego-like kit for making new molecules, so that hopefully everybody can do it!

If you were to die and come back as a person or thing, what would it be?
I hope it would be me, here and now. There is so much I am looking forward to.

Who is your favorite musician?
Wolfgang Mozart. I love the brilliant, child-like joy in his piano sonatas, which inspired and motivated me through my headphones during many long nights studying in Gilman Hall at JHU.

Who is your favorite writer?
Gabriel Garcia Márquez, for giving me cover to still believe in magic.

Who is your favorite artist? 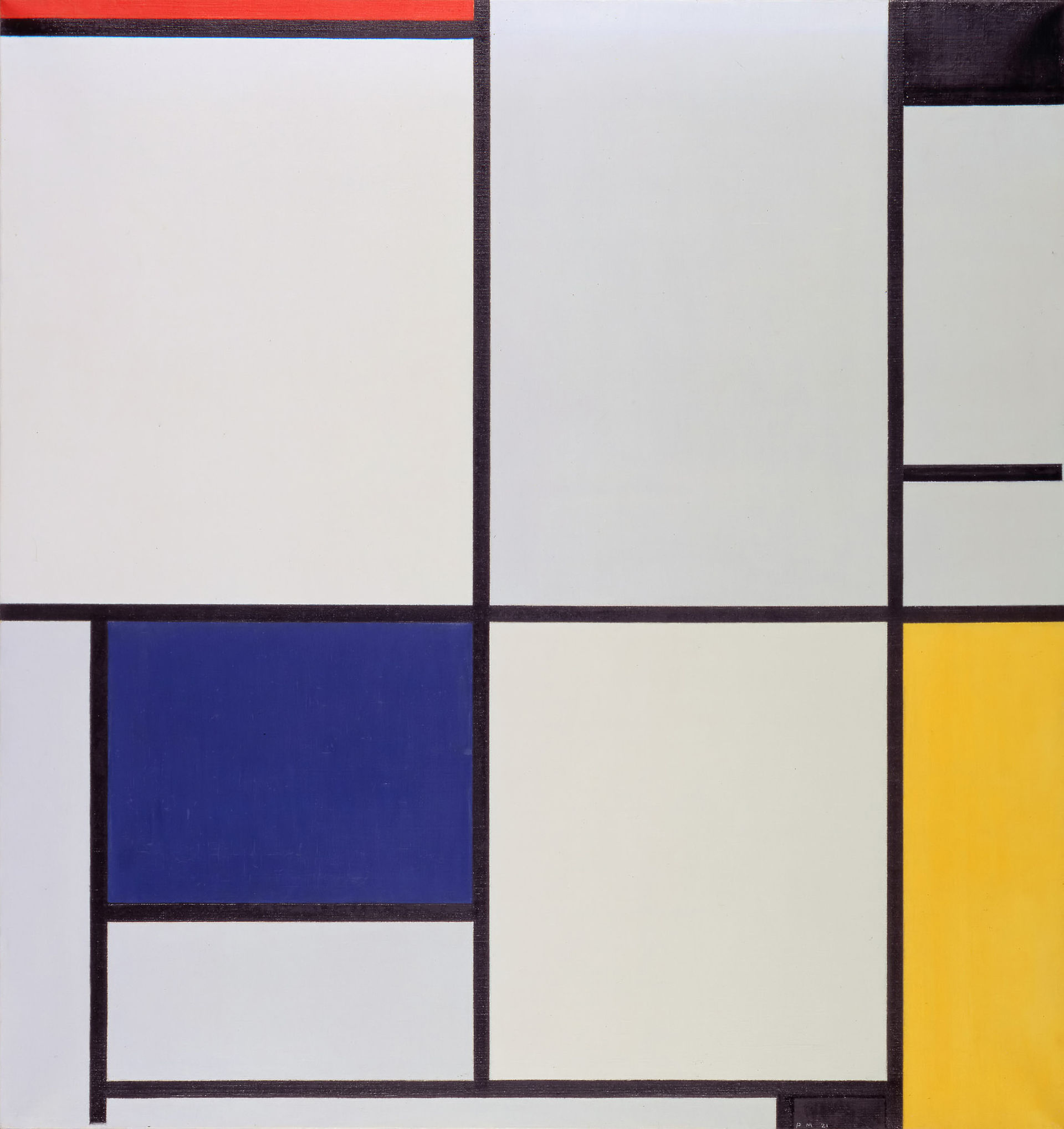 Piet Mondrian, “Tableau I,” oil on canvas at Gemeentemuseum Den Haag, The Hague in the Netherlands.

Piet Mondrian – If you look at Mondrian’s career he starts out painting nature scenes and then ends up with three colors and a few lines. In many ways, he deeply perceived his own visual experience and expressed it in a way that was the ultimate simplification, i.e., he triple distilled the essence of how we see.  I love that simple nature—the essence of something. That is how my students, and I love to think about making molecules—similar to the way a child plays with a Lego kit. I love the idea of taking something really complex making it as simple as possible. In my mind, simple equals powerful.

Where is your favorite spot in the world?
Nea Figaleia, a tiny village in Greece where my family vacations, and time stands still.