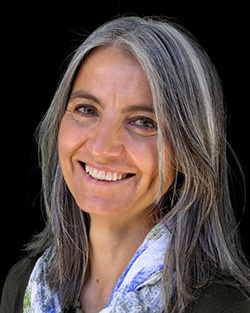 The grant recipients are Karen Ottemann and Fitnat Yildiz, both professors of microbiology and environmental toxicology, for research on chronic bacterial infections and carcinogenesis; Rebecca DuBois, assistant professor of biomolecular engineering, for research on the molecular mechanisms of a new class of immune checkpoint inhibitor; and Christopher Vollmers, assistant professor of biomolecular engineering, for a project to identify better targets for cancer immunotherapy.

Ottemann and Yildiz will collaborate on a study of the human pathogen Helicobacter pylori, which causes inflammation in the stomach that can lead to ulcers or stomach cancer. They aim to characterize several genes involved in the formation of biofilms, a growth mode which is highly resistant to antibiotics and difficult for the body to eliminate. Understanding biofilms in H. pylori and how they affect chronic infection, cancer development, and antibiotic resistance could lead to identification of biofilm inhibitors as potential treatments for H. pylori disease.

DuBois will investigate cancer immunotherapies in collaboration with researchers at Trellis Bioscience. Drugs called checkpoint inhibitors stop cancer cells from triggering the “off switch” of immune cells such as effector T cells, allowing the T cells to attack the tumor. Natural Killer (NK) cells are another type of immune cell with potential to kill cancer cells. A new class of checkpoint inhibitors that mask the “off switches” of NK cells is in development but has shown mixed results clinically. DuBois aims to uncover at atomic detail how these new inhibitors work, providing a basis to engineer improved inhibitors as a cancer therapy.

Vollmers is also interested in cancer immunotherapy. His project focuses on identifying all variants (called isoforms) of proteins on the surface of B cells. Out-of-control growth of B cells can cause several types of cancer, including acute lymphoblastic leukemia, chromic lymphocytic leukemia, diffuse large B-cell lymphoma, and Burkitt lymphoma. Immunotherapy that targets proteins on the cell surface can be effective, but cancer cells often evade recognition by changing the isoforms of these proteins. Vollmers aims to systematically and accurately identify the vast majority of protein isoforms present in B cells, and use this knowledge to identify better targets for future immunotherapy approaches.

The SCCBG holds several annual events to raise funds for the programs it supports. More information is available on the SCCBG web site.