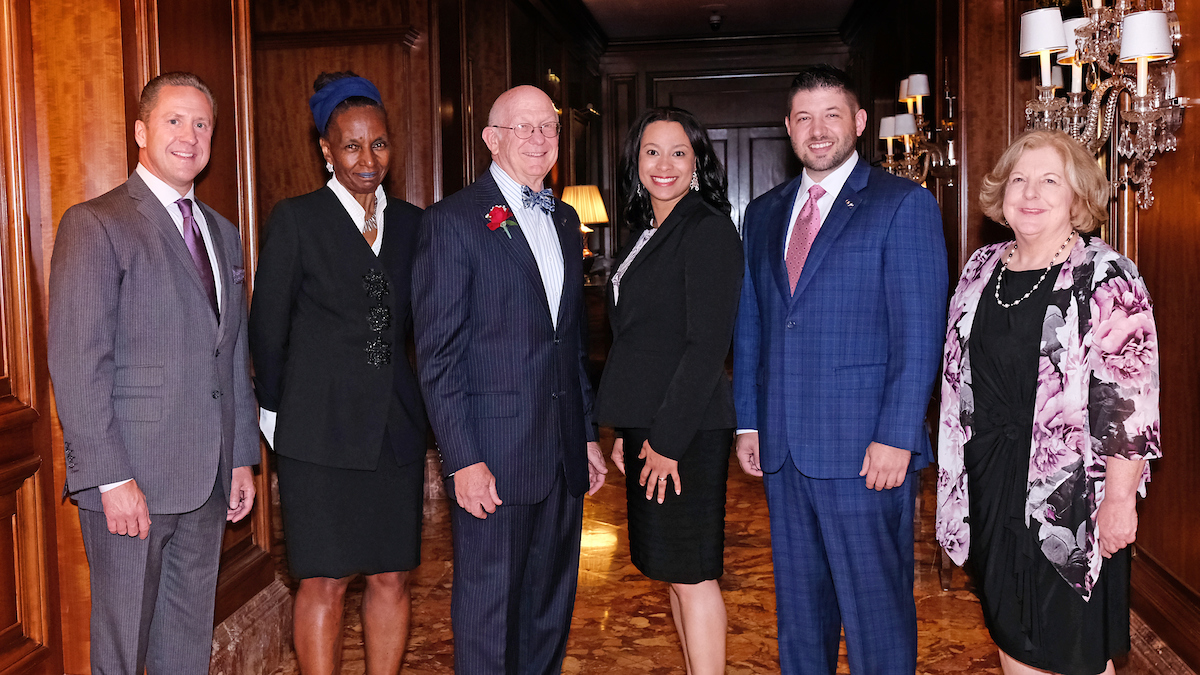 The University of Missouri–St. Louis Alumni Association celebrated six distinguished UMSL alumni as the university held its 27th annual Founders Dinner on Thursday at the Ritz-Carlton in Clayton, Missouri.

Traditionally, recognition is bestowed on alumni whose extraordinary careers and significant roles in community service set them apart from their peers.

Ken Cella, BSBA marketing 1993, is the principal for Edward Jones’ Client Strategies Group, which includes the firm’s marketing, products, research and trading and solutions areas. He began in an entry-level position at Edward Jones in the operations division and has steadily worked his way to his current position. He qualified for the Managing Partner’s Conference three times along the way – an honor reserved for only the top financial advisors at Edward Jones. Much of his success is attributed to his hard work and dedication to improving the lives of his clients. Cella actively seeks to give back to his UMSL community. He has served on multiple UMSL alumni boards and leadership councils, including a two-year term as president of the UMSL Alumni Association. Currently, he serves as an invaluable member of the Chancellor’s Council Executive Committee and co-chair of the Finance Committee.

Michael Finkes, BS chemistry 1973, MS chemistry 1978, is a longtime UMSL volunteer and a key member of the UMSL Alumni Association’s leadership. He spent 37 years at Monsanto working as a quality assurance specialist before retiring in 2010. He served as a liaison between Monsanto and UMSL for nearly 35 years and currently acts as the president of the UMSL Chemistry Alumni Network. During his time as president of the UMSL Alumni Association, he spearheaded the transition to an all-inclusive membership and worked diligently to ensure the association was not only interacting with other alumni but also engaging in the life of the university. Finkes helped to design and launch the “Dinner with 12 Tritons” program – which provides a networking opportunity for students and alumni – and remains an enthusiastic supporter of all UMSL Alumni Association endeavors. Without his dedicated efforts to give back to UMSL, the Alumni Association would not be where it is today.

Tori Gillespie, BS mechanical engineering 2007, is the mechanical department manager for KAI Design & Build – a company focusing on architecture, engineering and program and construction management services nationwide. In addition, Gillespie is the treasurer for the National Society of Black Engineers St. Louis Gateway Professionals. In this capacity, she is not only responsible for the financial welfare of the chapter but also helps plan events that promote black history and STEM. She serves as a mentor for high school students considering careers in mechanical engineering as well. As a member of Alpha Kappa Alpha Sorority, Gillespie has planned and participated in community events that focus on the economic growth of the black family and overall health awareness, such as breast cancer awareness seminars and disaster relief training for high school students. She tirelessly gives back to her community through her work at KAI and has proven herself as a leader and innovator.

Gwen Moore, BA sociology 1969, currently serves as the curator of urban landscape and community identity at the Missouri History Museum in St. Louis. One of her latest and most engaging projects was the exhibit, “#1 in Civil Rights: The African American Freedom Struggle in St. Louis.” This exhibit ran from March 2017 until April 2018 and was the focus of the 2017 UMSL Primm Lecture Series. With nearly 250,000 visitors during the 13-month run, it was the fourth-most visited exhibit ever at the museum. Earlier this year, she was recognized at the 2018 UMSL Trailblazers ceremony – which honors and celebrates the achievements of exceptional women who’ve paved the way for others both on campus and throughout the entire St. Louis region. Moore is a nationally recognized historian in both the written and oral tradition. Her passion and dedication for chronicling African American history is apparent throughout her many projects and her engagement within the St. Louis community.

Mary Suiter, BS economics 1985, PhD education 2007, is the assistant vice president and economic education officer for the Federal Reserve Bank of St. Louis. A devoted alumna, she is one of the region’s leaders in the financial education and economic fields and a bridge between UMSL and the Federal Reserve Bank of St. Louis. She has developed award-winning curriculum and resources for financial literacy, especially for those who are traditionally underrepresented in the field of economics. Before joining the Federal Reserve, Suiter was the director of the UMSL Center for Entrepreneurship and Economic Education, an outreach unit of UMSL and an affiliate of the Department of Economics. She has authored more than 50 publications and won numerous local and national professional awards for her work. She fosters an excellent alumni relationship with the Department of Economics, reaching out to notify current students about opportunities and internships within the Federal Reserve.

This year’s Outstanding Young Alumni Award recipient was Aaron Golchert, BSBA management 2007. Golchert is an area director for N2 Publishing, a leading provider of specialty publications for exclusive communities across the nation, where he has held several positions: development director, market director of Los Angeles, and now the sole national field trainer for the company. In this capacity, he travels nationally to train and lead new sales professionals. He has served on numerous boards, including Business Network International, the Eureka Chamber of Commerce and the UMSL Alumni Association Governing Board. Golchert is actively involved in Big Brothers Big Sisters of Eastern Missouri, his fraternity Pi Kappa Alpha and numerous other civic organizations. He has proven his continued dedication to the betterment of the UMSL community through a variety of volunteer opportunities. They include speaking at commencement exercises and various workshops, serving on the executive committee for the UMSL chapter of Pi Kappa Alpha’s Alumni Association and co-hosting two Dinners with 12 Tritons.