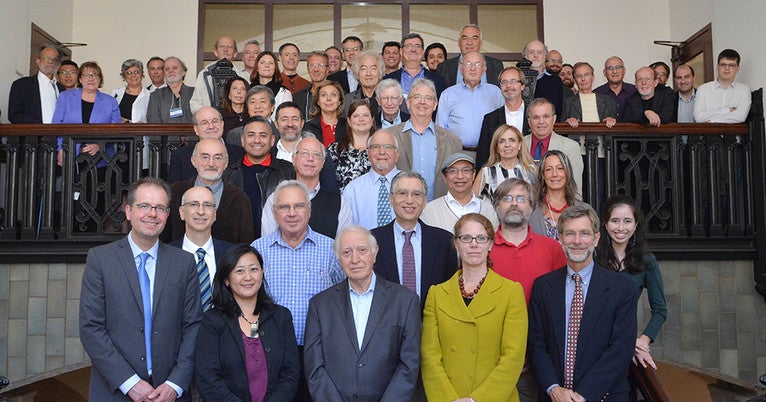 The symposium, “Symmetries and Order: Algebraic Methods in Many Body Systems,” was held at the Sloane Physics Laboratory, and featured talks and conversations on topics to which Iachello made significant contributions. Those topics spanned the fields of nuclear structure, molecular and hadronic structure, neutrino physics and double beta decay, and symmetries and phase transitions. The full symposium program can be found on the conference website.

Iachello has been a faculty member at Yale since 1978. His work has been dedicated to the study of symmetries in physics through the introduction of models based on symmetry and their application to physical systems. He has received numerous prizes, awards, fellowships, scientific academy memberships, and honorary doctorates throughout the world for his groundbreaking research.

“Professor Iachello is an exceptional scholar, mentor, and friend, and it has been a pleasure organizing and being a part of this celebration that will honor both his historic and impactful leadership in the field of theoretical physics and his dedication and service to Yale,” said physicist Reina Maruyama, chair of the local organizing committee for the symposium.

In addition to the two days of talks, Iachello was honored at a banquet at the Union League Café as part of the symposium.

The symposium was audio-recorded, and talks will be posted online. The official proceedings will also be published by the American Institute of Physics.

More information about the symposium can be found at the conference website.