German Ambassador calls next generation to renew transatlanticism between U.S. and EU 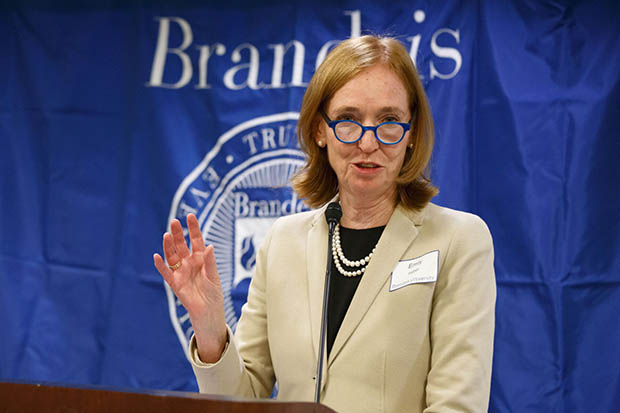 German Ambassador to the United States Emily Haber says she’s optimistic about the future of U.S.-Germany relations, and encouraged the next generation of leaders to forge new paths in establishing worldwide peace and prosperity.

Haber, who began her ambassadorship in June 2018,  made her remarks at a campus event marking the Center for German and European Studies’ (CGES) 20th anniversary.

CGES, which was founded at Brandeis in 1997 with support from both the German government and university supporters, conducts interdisciplinary teaching and research on contemporary Germany and Europe. With the guidance of CGES director Sabine von Mering, the center’s research primarily focuses on the social, political and cultural issues facing Germany and Europe today.

Haber’s keynote remarks during a festive gala dinner at the Brandeis Faculty Club kicked off a two-day academic conference that brought dozens of thought-leaders, economists, philanthropists, activists and governmental officials to Brandeis from around the world.

“There is an intensely knit fabric in relations such as ours,” Haber said. “Much of this is remote of the daily disputes of politics, because of the historical ties between us.”

“However, there is another unbreakable link, of which Brandeis is a strong symbol of: Germany, America, and of course Israel, have – coming from many different vantage points – made sure history and its memory are part of what they are,” added Haber. “Because this is so profound, it will not fade away.”

Haber spoke for nearly 25 minutes, touching on a variety of areas of both historic and current interest to both the U.S. and Germany: immigration, the Marshall Plan, Russia, and relations between North America and the EU.

Some of Haber’s speech even alluded to remarks by former German Chancellor Helmut Kohl during his 1998 Commencement address at Brandeis. Kohl received an honorary degree in laws from the university and dedicated the CGES when he visited campus for graduation.

“He delivered, in fact, a quite remarkable and personal speech,” said Haber of Kohl. “He called for a renewal of U.S.-German relations. Of course, he did so against the backdrop of the end of cold war. I would say we are still struggling with shaping this renewal of relations.”

“Renewal is so important,” Haber added. “Look at the challenges. It’s important to safeguard alliances with like-minded states. For the U.S. and the EU, this relationship is indispensable for combatting tectonic shifts. Our core values and the challenges we face outweigh our differences.”

“The vision of transatlanticism needs new inspiration – I have framed it in terms of threats and defending our way of life, which I hope is viewed as cogent and well-founded – but I hope that the younger ones among us will help define and renew the framework of a joint agreement. The core of transatlanticism remains the U.S. and EU,” she said.

Following dinner, von Mering moderated a discussion and Q&A about anti-Semitism and right-wing populism in Europe with Sonja Lahnstein-Kandel, an advocate and activist for civil rights and tolerance in Germany and Israel.

The tenor of academic discussion continued into Sunday, which featured panels about migration in Germany; Germany’s role in the EU and its relationship to North America; and the future of Holocaust education.

Kai Keller ’07, Ingrid Schulte ’13, and Arina Lô Chithavong-Lester MA’15 also spoke about how their work at CGES had prepared them well for their global careers in the areas of climate change, finance, and affordable housing. Alumni also sent video messages from places as far as Dakar, Senegal and Heidelberg, Germany.

Brandeis President Ron Liebowitz praised von Mering’s leadership of CGES and expressed pride at the center’s growth since its inception, particularly through its engagement with undergraduate students.

“CGES at Brandeis, true to our beginnings, has always been bold and daring,” Liebowitz said. “CGES represents a paradigm of what makes us special: global in perspective; interdisciplinary in approach; student-centered; taking on the hard questions and seeking the truth, as our motto challenges us, even unto its innermost parts.”

“As with any successful initiative, good intentions need to be matched with competent, and in this case extraordinary, leadership,” added Liebowitz. “In professor Sabine von Mering, we are blessed not only with a scholar with impressive range of intellect and expertise but also a director with passion and fierce integrity and a burning desire to make our work distinctive, relevant and consequential.”