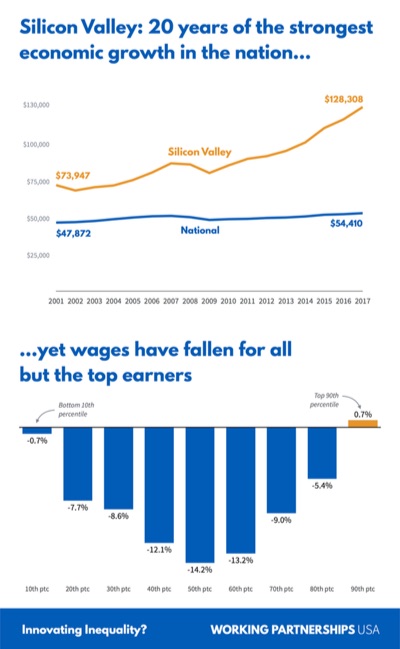 “This isn’t about technology increasing inequality, it’s about the rules and rewards that determine who benefits from innovation,” says the report’s lead author Chris Benner. (Graphic courtesy of Working Partnerships USA)

Despite leading the nation in economic growth since 2001, the vast majority of workers in Silicon Valley have been excluded from the area’s enormous economic boom, according to the results of a new study that reveals that nearly nine in ten jobs pay less today than they did 20 years ago.

The study was led by Chris Benner, professor of sociology and environmental studies at UC Santa Cruz, where he is the director of the Everett Program and the Santa Cruz Institute for Social Transformation. A report brief, “Innovating Inequality? How Tech’s Business Models Concentrate Wealth While Shortchanging Workers,” is available online; the full report, “Still Walking the Lifelong Tightrope: Technology, Insecurity and the Future of Work,” is also online.

The tech sector has developed and propagated business models that give outsized rewards to a few top investors and executives, at the price of increasing financial insecurity for everyone else who contributes to the industry’s success, said Benner.

“Tech investors and executives are receiving disproportionately large earnings, as they capture unfair returns in winner-take-all markets and from monopoly technology rents, to the detriment of Silicon Valley’s workers and residents,” said Benner. “This isn’t about technology increasing inequality, it’s about the rules and rewards that determine who benefits from innovation.”

Working Partnerships USA collaborated in the research for the report.

“Cities across the country are falling head over heels to emulate Silicon Valley’s boom, but the reality is that tech’s business models mean 9 in 10 workers here don’t share in the benefits—only the costs in sky-high housing prices and gridlocked traffic,” said Derecka Mehrens, executive director of Working Partnerships USA. “It’s clear those business models need to change so that the workers and communities who make the tech industry’s success possible see a fair return on their work.”

The authors identified a set of concrete actions Silicon Valley’s communities, policymakers, and tech industry leaders can take so that all the workers who contribute to the industry share in its success, including: