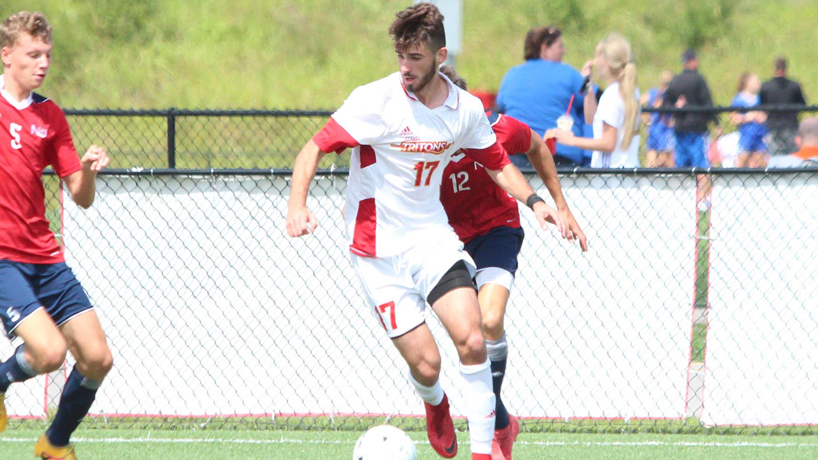 Senior midfielder Kenan Selimovic netted the game-tying and game-winning goals for UMSL in a 3-2, double-overtime win over Missouri S&T on Friday. Selimovic’s first goal came in the 81st minute, and the decisive strike came in the 104th minute.

Men’s Soccer
Senior Kenan Selimovic scored the game-tying and game-winning goals on Friday night as the Tritons earned a 3-2, double-overtime win at Missouri S&T. Selimovic notched the equalizer in the 81st minute to make the game 2-2 and then connected on the golden goal at the 103:28 mark. UMSL (5-5, 4-3 Great Lakes Valley Conference) had its Sunday game at Maryville postponed because of lightning. That game will be made up Monday at noon. UMSL then hosts Bellarmine on Friday before traveling to Southern Indiana on Sunday.

Volleyball
UMSL lost three matches, including a 3-0 setback at home to McKendree on Tuesday and a 3-0 decision at Missouri S&T on Saturday. The Tritons also came up short on Friday night with a 3-2 loss at No. 12-ranked Drury, rallying back from a two-set deficit to force a fifth set, which the host Panthers won 15-13. Junior Kylie Rudsinski had a career-high 22 kills in that contest and finished the week by averaging 3.4 kills per set. UMSL (7-13, 3-9) is at the Midwest Region Crossover Tournament in Indianapolis this weekend. The Tritons will face Northwood on Friday and Ohio Valley and Cedarville on Saturday.

Women’s Soccer
UMSL scored a season-high three goals in a 3-0 win at Missouri S&T on Friday night. The Tritons then suffered a 3-0 setback at Maryville on Saturday. In the win, sophomore Emily Hanewinkel, freshman Mia Milazzo and senior Taylor Andert all scored. UMSL (3-8, 2-6) will host Bellarmine this Friday night before traveling to Southern Indiana on Sunday.

Women’s Golf
The Tritons shot 295 Sunday in the opening round of the Findlay Beall Fall Classic and enter Monday’s final round with a five-stroke lead. Junior Emma Thorngren and freshman Sofia Maxen each carded scores of 73 and sit in a four-way tie for second place, one stroke off the lead. After the Findlay tournament, UMSL will be at the NCAA Preview next Monday and Tuesday in West Palm Beach, Florida.

Women’s Tennis
The Tritons closed out their fall season by hosting the UMSL Fall Tournament on Friday and Saturday. Junior Bianca Buie captured the B flight singles title, while Buie and freshman Clara Lopez Bueno lost in the B doubles final. Senior Salome Bleuler reached the finals of the A flight singles for the Tritons. The A flight doubles was pushed back to Monday because of weather and features an all-UMSL finale, with Blueler and freshman Odette Beagrie going against sophomore Leticia Lunge and junior Marina Prediger.