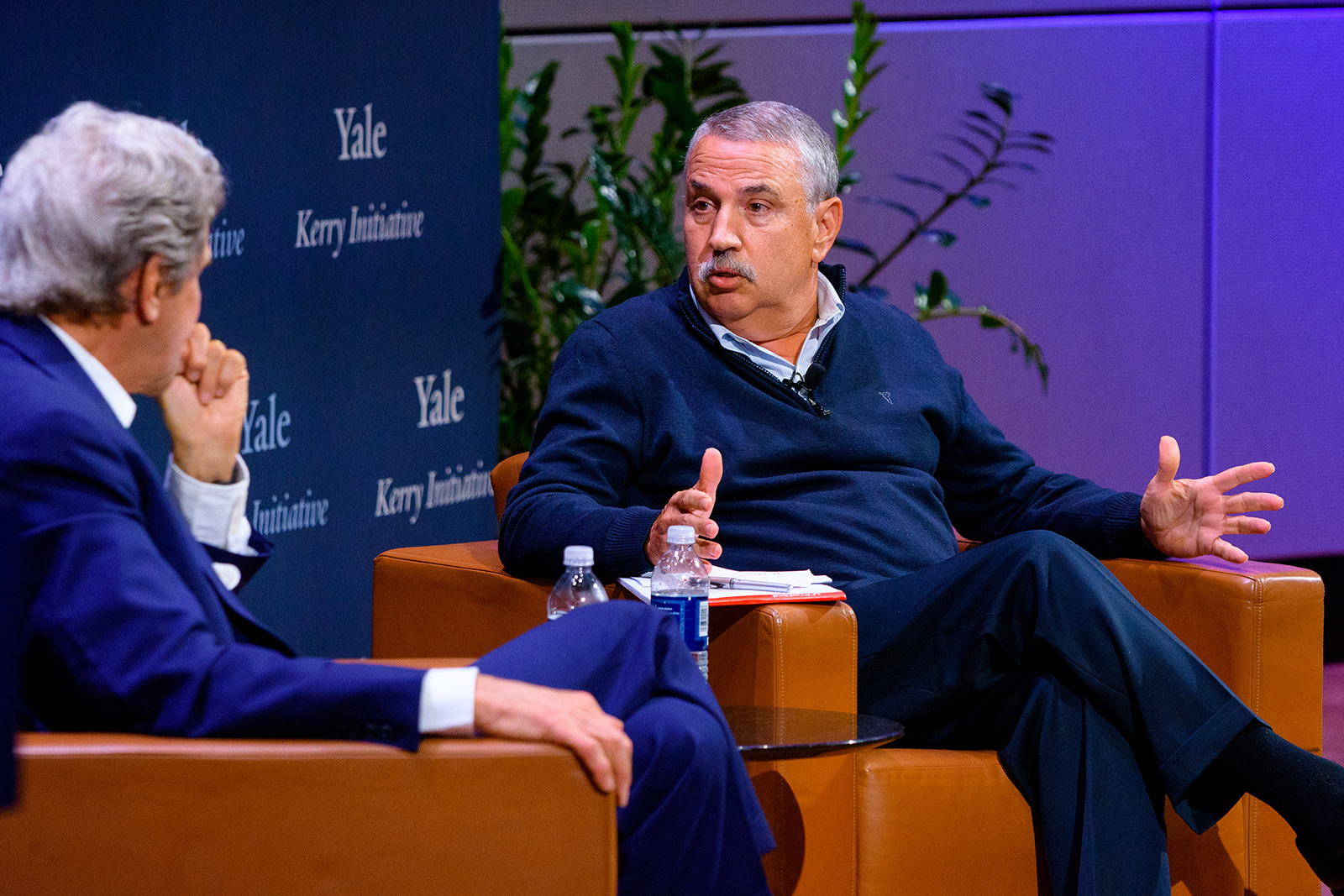 The greatest political divide in the world today is between order and disorder.

That was one of the insights offered by Thomas Friedman, a Pulitzer Prize-winning journalist and author, who joined former Secretary of State John Kerry for a conversation on the state of democracy at home and abroad.

“The biggest driver in the world today is people moving from disorder to order,” Friedman said, citing the mass economic migration of people from developing countries to the West as well as the impact of climate change. He observed that weak nation states are no longer being propped up by two superpower countries, as they were following World War II.

The U.S. needs to stabilize these regions, he said, because “when people are desperate, they will come.”

Friedman’s remarks were part of a “Kerry Conversation,” a series hosted by the Kerry Initiative at the Yale Jackson Institute for Global Affairs. The initiative, founded in 2017, is an interdisciplinary program that tackles pressing global challenges through teaching, research, and international dialogue.

The October 8 conversation was held before a full house in the School of Management’s Zhang Auditorium. It was a wide-ranging discussion on geopolitics, the divided nature of the country, the impact of climate change, and global leadership.

The two also discussed Kerry’s newly-published memoir, “Every Day Is Extra,” which Friedman described as “a roadmap of how [Kerry] managed to get from the darkness to the light side.”

Kerry reflected on his time in the Senate, when senators from both parties would meet for informal dinners—which often paved the way for bipartisan agreements. In 2018, “compromise has become a bad word,” Kerry said.

Kerry pointed to declining voter turnout in elections as a major issue for our democracy. “The 2016 election,” he said, “is the story of those who didn’t vote.”

Friedman, whose weekly column appears in The New York Times on Wednesdays, recalled his writing process on the Tuesday night of the 2016 election. He had three different versions ready, depending on the outcome, but all concluded with a quote from a friend who recently became a U.S. citizen: “You Americans kick around your country like a football. It’s actually a Fabergé egg. You can break it.”

Friedman and Kerry also reflected on the U.S. withdrawal from the 2015 Paris Climate Agreement, which Kerry helped to broker during his time as secretary of state. For Kerry, that move represents both a missed business opportunity and a pullback in U.S. global leadership. Following the agreement, $358 billion dollars were invested in alternative, sustainable renewable energy.

Kerry and Friedman also took written questions from audience members on a wide range of topics, including the Iran nuclear deal and news reports about the death of Saudi journalist.

Kerry wrapped up the conversation with an anecdote about his friendship with the late Republican Sen. John McCain. While in the Senate, the two traveled to Hanoi and visited McCain’s prison cell, where he was held during the Vietnam conflict.

“We were able to find common ground in the interest of our country,” Kerry said, “What we both concluded was that if the protester and the P.O.W. can come together in Hanoi and understand the importance of common ground, we can do it from anywhere in this country. Everything depends on it.”