Civic responsibility and school spirit will merge on Friday, Oct. 12, when the Yale chapter of Every Vote Counts kicks off its Pledge to Vote campaign 3-5 p.m. on Cross Campus.

Every Vote Counts at Yale is a student-led, non-partisan organization dedicated to increasing youth participation in U.S. elections and ending voter suppression. Its goal is to ensure that all eligible Yale students cast ballots in the upcoming election.

Toward that end, the group joined with the Yale Democrats, the Yale Republicans, and the Yale College Council to launch the Yale Votes initiative to register student voters and encourage participation in the midterm elections. More than 50 groups have joined the coalition, which has received support from Secretary and Vice President for Student Life Kimberly Goff-Crews and the University Registrar’s office

All told, 25 colleges across the nation are taking part in the Pledge to Vote campaign. Harvard and Yale are competing this year to see which school can get the most pledges to vote before Nov. 6. 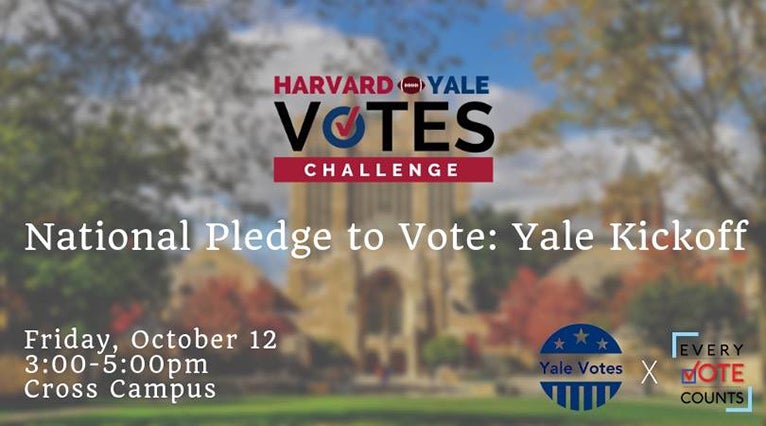 Students are invited to come to Cross Campus to take the pledge, register to vote, and request or send an absentee ballot. There will also be free food, music, and a photo booth. Clubs members are encouraged to come wearing their apparel and take the pledge photo as a group, but everyone is welcome. Clubs that attend will have the opportunity to become official Yale Votes partners, ensuring access to registration events and help requesting or sending absentee ballots.