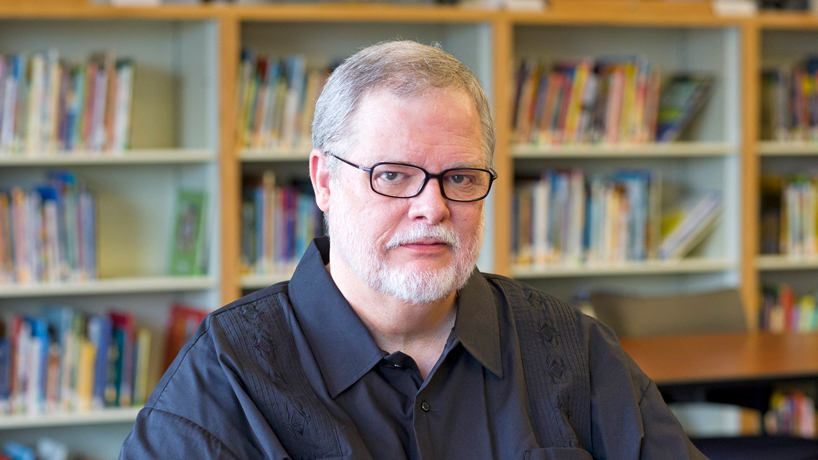 Mark Pope, Curators’ Distinguished Professor emeritus for the UMSL College of Education, was awarded the inaugural Mark Pope Social Justice and Advocacy Award in September by the Association for Lesbian, Gay, Bisexual & Transgender Issues in Counseling, an organization he helped found. Pope retired from UMSL at the beginning of the 2018-19 fall term after 21 years teaching at the university. (Photo by August Jennewein)

Mark Pope was used to receiving awards with other people’s names attached to them.

Over his distinguished career as a counselor and educator, Pope made a habit out of earning honors such as the 2001 American Counseling Association Kitty Cole Human Rights Award, the 2004 Cesar Chavez Service to Others Award from the Association for Multicultural Counseling and Development and the 2018 Thomas Jefferson Award, given annually to just one recipient across all four universities in the University of Missouri System to recognize distinction in teaching, research, writing, creative activities and service.

At this year’s Association for Lesbian, Gay, Bisexual & Transgender Issues in Counseling national conference, though, he got to experience something new.

This time, the award was named for him.

On Sept. 6, in front of a crowd of his peers at the downtown Hilton in Portland, Oregon, Pope was named the inaugural recipient of the ALGBTIC Mark Pope Social Justice and Advocacy Award, for ALGBTIC members who demonstrate “a profound commitment to inclusion and equity for the LGBTQQIA+ community through social justice and advocacy efforts.”

Pope first heard he’d be receiving the award about five months prior. That didn’t lessen the impact of the moment.

“It was a very simple thing, but it was very moving to walk up and hear them talk about me and what I meant to the organization,” said Pope, Curators’ Distinguished Professor emeritus in counseling and family therapy programs at the University of Missouri–St. Louis. “Then to get a big standing ovation from everybody that was there was so moving. I couldn’t say much. I was getting kind of choked up. I did just say ‘thank you,’ and that it was one of the most meaningful awards I had ever received, because it came from this particular group that was so important to me both in my personal and professional lives.”

Pope was one of the founders of the ALGBTIC predecessor Caucus of Gay Counselors in the early 1970s, when he was still a graduate student at the University of Missouri–Columbia. Back then, members of the CGC met behind closed doors at the annual ACA national conference for fear of being outed and facing professional repercussions.

Homosexuality was classified as an illness in the American Psychiatric Association’s “Diagnostic and Statistical Manual of Mental Disorders” up until 1973. Three decades later, in 2003, Pope was named president of the ACA, the first openly gay person to be named president of a major mental health organization.

“We’ve come quite a long way from the door-closing days. There is obviously still more to go,” Pope said. “It’s kind of like watching your child grow. I felt like I was the parent of ALGBTIC, to a certain extent, with several other people. Just to watch the changes that it’s gone through over the years, it’s been extraordinary. It’s been a very important group in the history of our profession. I just feel very proud to have been somebody who moved the ball forward, as we say.”

Pope served as a professor in the UMSL College of Education for 21 years before retiring at the start of the fall term. The UMSL Alumni Association helped plan an event in his honor on Sept. 28 with more than 100 former students and colleagues coming to St. Louis from places such as California, Colorado and New York City to celebrate a trailblazer in his field.

“Mark has done it all,” said Ann Taylor, dean of the UMSL College of Education. “He has devoted his professional life to advocacy and scholarship, publishing more than 100 articles, books and chapters on multicultural awareness and career development. Notably, he developed a model of career counseling with underserved populations that is recognized as one of the major theoretical works in his field.

“Through all of this, he has pressed forward the cause of freedom and equity for all people. His colleagues professionally recognize him as an outstanding thinker and honor him with national awards, while his students know him as a great teacher and supporter, recognizing him with their gratitude for his care and attention to their growth. The college has been the recipient of his strong leadership and organization, as he has worked alongside colleagues to grow a counseling education program nationally ranked for its rigor and excellence.”

Now, Pope is on to finishing up a purposeful cleaning of his two offices on the UMSL campus. He is working with Charles Brown, the University Archivist and Oliver M. Langenberg Curator of Reference for the St. Louis Mercantile Library, to establish both a Mark Pope Special Collection of his historical papers and an archive of the remainder of his voluminous papers for the Thomas Jefferson Library. Both are scheduled to be available by the end of 2018.

Sorting through papers from a career well spent is taking a little longer than Pope expected.

“It’s very time-consuming, because it’s going through every piece of paper that I’ve saved and refiled,” Pope said. “I tend to be a packrat.”