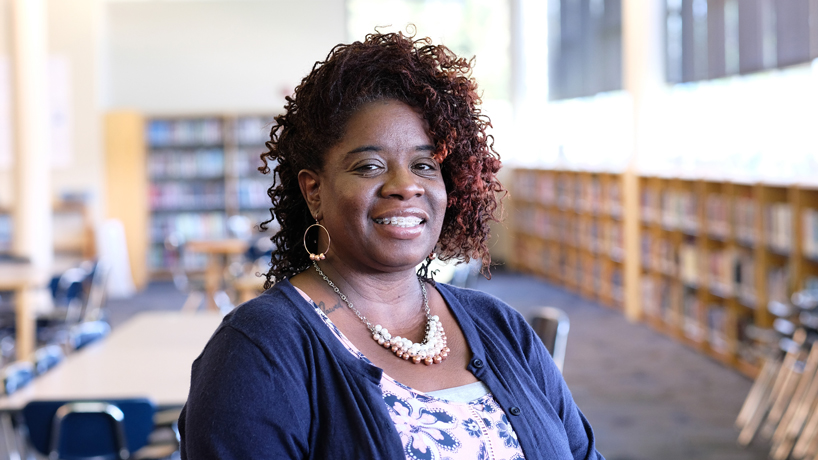 Tamara Wells, who earned her EdD from the UMSL College of Education in 2016, was one of the honorees at the St. Louis American Foundation’s Salute to Excellence in Education Scholarship and Awards Gala on Sept. 29. Wells, a secondary English language arts curriculum coach in the Hazelwood School District, developed a CHAT Academy for students to have substantive discussions about current events that affect their community. (Photo by August Jennewein)

A house fire showed Tamara Wells the impact an engaged educator can have on a student’s life. An exchange over the proper use of language showed her the alienation inherent in the classroom experiences of many African American students.

And a call to action from administrators at the start of her EdD program at the University of Missouri–St. Louis, in the wake of the civil unrest in Ferguson in 2014, gave her a crystal-clear picture of how she was going to make a difference.

Tamara Wells said she shares her St. Louis American Foundation Excellence in Education Award with the students in her CHAT Academy. (Photo courtesy of Tamara Wells)

Wells, a 2016 UMSL graduate, is a secondary English language arts curriculum coach in the Hazelwood School District, where she has worked since 2000. Her main responsibility is to work with middle- and high-school ELA teachers in the district to effectively implement curriculum.

Her signature program, started when she was a middle school ELA teacher herself, is the CHAT ­– Children Having Academic Talks – Academy, which challenges her group of 28 high school students to a series of current events discussions in which they examine their identities and viewpoints through shared experiences and dialect, embracing the validity of different ways of using language among her students.

“I share this honor with my CHAT scholars,” Wells said. “The conflict they had with language is what stretched my thinking. The challenge for me as an educator was to link it to curriculum. It is really driven by them. They facilitate, and I’m in the background.”

CHAT started as Wells’ thesis project at UMSL, inspired by her committee’s instructions.

“They said, ‘We don’t want our students to just write the traditional five-chapter thesis,’” Wells recalled. “‘We want them to create something our neighboring communities can use as a means of healing and as a means of moving us forward’ from all of the chaos and things that had taken place.”

She originally set out to create a program that weaned her majority African American students off of “African American vernacular English” and onto more academically accepted language conventions, so they could score better on state standardized testing.

They asked Wells for guidance, and she didn’t have an answer. She took the conversation to UMSL Associate Professor Kim Song, who encouraged her to dig deeper.

“I realized that it was more about their identity than it was this language that I thought I was going to correct,” Wells said. “I understood that the way we speak is a part of who we are and that, if you denounce or discredit your mother tongue – your first language – then you devalue the person.”

That realization came from a personal place for Wells.

She grew up in the Carr Square Village public housing development on the north side of St. Louis and, starting in sixth grade, was a desegregation student in the Pattonville School District, more than 15 miles to the west in St. Louis County.

As one of only a few African Americans in her classes, she started to feel out of place. Wells said one of her middle school teachers tied her suddenly low grades on writing assignments to the community in which she grew up.

“I didn’t have the passion for writing like I used to,” Wells said. “One of my teachers said I write the way I speak, but the question before that is what bothered me: ‘Where do you live?’”

Wells flashed back to that moment during her students’ debate over proper verb usage.

“I realized that I unintentionally forced upon them what was forced upon me,” Wells said. “From then on, when we would do those language lessons, I would let them talk about it. I started taking field notes and recording what they were saying. I began to study them while I studied the old me.”

The CHAT Academy started in 2014 and has grown organically since. The sessions still include some of the original students, who started when they were in sixth grade.

Any time a galvanizing cultural moment happens, the group takes it upon themselves to gather and discuss. Wells said she has built a lesson plan centered on educating English teachers in the district about the “different languages that students use” from an early CHAT session. She gained funding for a professional audio team to record and produce the group’s roundtable discussions for public dissemination.

“It’s helping to position them, as young adults, to where they want to go in life,” Wells said. “When you think about panel discussions, you think about people in suits sitting at a table. My students are now these panelists. Our ultimate goal is to get it beyond just Hazelwood School District. Students are taking the initiative to solicit these CHATs, and then they’re using them as a means to help communicate with their peers, to unpack what’s happening in the world, to get a better understanding. It still uses that healing piece that UMSL first brought to mind when I started the program.”

Healing, too, hits a deeply personal note in Wells.

Her family’s house burned down when she was in sixth grade. Everything was gone. It happened on a Wednesday night, Wells said, which was another significant hit to her psyche because she had to miss school and ruin her perfect attendance record.

When she returned to school, Wells found that her social studies teacher, Kathy Oster Schulte, had organized a donation drive among her Pattonville colleagues, collecting clothing, appliances and other items to help Wells’ family get back on its feet.

“I already felt different trying to adjust, knowing that I came from the projects,” Wells said. “This teacher saw me and cared about me, not just in the classroom setting, but to make sure my personal life was OK. I just knew that I wanted to do that for someone else.”