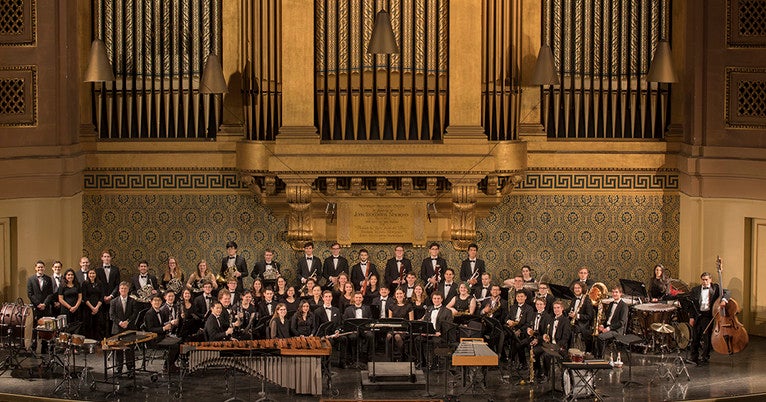 As part of its 100th-year celebration, the Yale Concert Band will open its season with a concert featuring a duo of pieces from 1918 and will play a piece in honor of Leonard Bernstein, who shared a birthday with the band (also 1918).

The centennial season opener will take place on Friday, Oct. 12, at 7:30 p.m. in Woolsey Hall, corner of Grove and College streets. Admission is free.

The program includes “Symphonic Dances from West Side Story” a montage of music from the musical transcribed by Paul Lavender. “West Side Story” is a musical retelling of Shakespeare’s “Romeo & Juliet,” but set amid the tensions of rival social groups in 1950s New York City. The piece will be performed in honor of what would have been Bernstein’s 100th year.

The duo of 1918 pieces are Irving Berlin’s “Good Bless America” and Oliver E. Story’s “Yankee Division March.” Berlin wrote “Good Bless America” while serving in the U.S. Army at Camp Upton in Yaphank, New York. Story’s “Yankee Division March” celebrates and honors the members of the 26th Infantry Division for their service in World War I. Comprised of soldiers from New England and based outside of Boston, Massachusetts, this was the second American division to reach the Western Front during the war.

The concert will also feature “Decoration Day” by Charles Ives, Yale Class of 1898, a depiction of the sounds the composer heard at the side of his father, the director of the Danbury (CT) Band, on the occasion of the holiday that is now known as Memorial Day; “James Reese Europe & His Society Orchestra” (1914), which presents the sounds of the “sweet society” music that links the American brass band to the coming Roaring Twenties Jazz Age; Daniel Bukvich’s “Agincourt Hymn”; and Percy Aldridge Grainger’s “Handel in the Strand.”