Can’t we all just get along? Cornel West and Robert George to debate at Brandeis 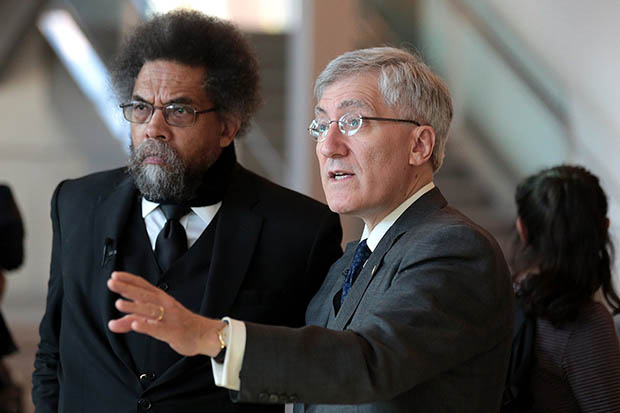 What happened to civil, public discourse in America?

Tha’s a question that leading intellectuals Cornel West and Robert George are attempting to answer as they tour the country to debate one another on critical issues. Their next stop? Brandeis, on Wednesday, Oct. 17 at the Sherman Function Hall.

West, a liberal-minded thinker who is now a philosophy professor at Harvard University, and George, a conservative legal scholar and research fellow at the Notre Dame Center for Ethics and Culture, are both close friends who have made an art form of agreeing to disagree.

American Studies professor Maura Jane Farrelly, with support from the Office of the President and numerous academic departments and centers at Brandeis, has led the effort to bring West and George to campus for the event “Liberal Learning: Open Minds and Public Debate.”

BrandeisNOW caught up with Farrelly to discuss West and George’s upcoming visit:

BrandeisNOW: What will Cornel West and Robert George be talking about when they come to Brandeis?

Well, it’s my understanding that these two men have a deep and abiding friendship with one another, built in no small part on a mutual love of learning and a real respect for the practical power of the humanities and philosophy in particular. When it comes to some of the most difficult social policy issues facing Americans today, however, George and West have some pretty profound disagreements.

Ideologically, George is conservative, while West is liberal. They’re both public intellectuals, and so each one of them is quite well known for his principled stance on a variety of issues. I imagine that one of the things George and West will talk about talk is their friendship and how “liberal learning” and their investment in the so-called “liberal arts” has helped them to maintain their friendship as they navigate their disagreements. I suspect they’ll also tell us how liberal learning has helped them to explore their disagreements in a way that is productive and mutually beneficial, two qualities that seem to be absent from the disagreements many of us in America, myself definitely included, are having right now.

How did you first learn about their increasingly unusual friendship?

I first became aware of their friendship, and their concern about our collective commitment to the conditions that make disagreement productive and free inquiry possible, last year. That was when I read that George and West had issued a joint statement following an incident at Middlebury College, during which an invited speaker was shouted down and prevented from sharing his controversial ideas with the college’s community.

That statement called for anyone interested in “the pursuit of knowledge” to “oppose efforts to silence those with whom we disagree especially on college and university campuses.” It was eventually signed by hundreds of scholars, too many for me to go back and count now, actually. I did not sign it myself, but I recognized many of the names that did sign it, and I knew that ideologically, they were all over the political spectrum, some very conservative, some very liberal, most somewhere in between.

That was very striking to me.

Why did you invite Robert George and Cornel West to campus?

Both men are public intellectuals, and I teach a course called “Public Intellectuals in American Life.” I taught it last spring and West’s famous book, Race Matters, is one of the works that my students and I considered over the course of the semester, actually.

West is one of the more liberal authors we considered, but we worked our way through conservative thinkers, too: Francis Fukuyama, Jean Bethke Elshtain, Chris Hitchens (to some degree). I had a really fantastic crop of students in that class. And the whole time, I felt that the conversations we were having were precisely the kind of conversations that West and George had called for in that statement they released following the incident at Middlebury.

A friend of mine had put me in touch with Kent Lawrence, who graduated from Brandeis in 1966. Kent was already funding a “Supper Club” for the American Studies program; thanks to Kent’s generosity, seven students and I got together five times over the course of the spring semester to read and discuss some primary source documents that were relevant to America’s Founding and to have a really nice meal at a restaurant in Waltham. And so I started talking to Kent about my public intellectuals course and West and George and the idea to bring the two men to campus just kind of grew from that. Without Kent Lawrence, this would not be possible.

What do you hope people will take away from the event?

I guess I hope they’ll walk away understanding that life in a liberal society is not easy, cannot be easy, and should not be easy. We have to work at being free, which requires us to have a deliberate and active understanding of what freedom is, why it matters, and what makes it possible.