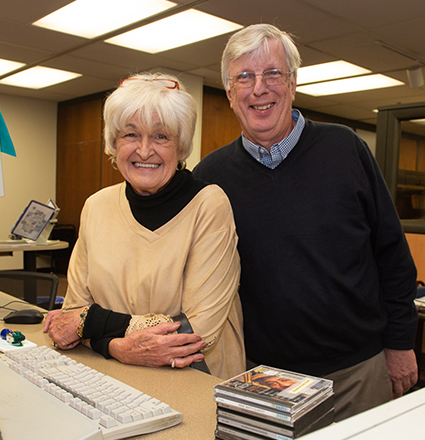 True to its name, Southern Illinois University Edwardsville’s Lovejoy Library brought both love and joy to alumni Richard and Ann Moss who met there as student workers in the fall of 1966.

A lot has changed in the library since then, but remaining steadfast has been the love shared by Richard and Ann. In honor of their 50th wedding anniversary, they returned to where it all began for a tour and special celebration on Thursday, Oct. 11.

“This is very special! We had no idea our visit would be this involved,” said Ann, while enjoying cake and reminiscing in Lovejoy Library’s Friends Corner. “This has been entertaining, fun, interesting and informational.”

While at SIUE, Ann worked at Lovejoy Library’s circulation desk and Richard worked in maintenance. Their love story began when Ann called Richard to come take care of two unwelcome rodents she had spotted!

“That was the first time we met,” Ann laughed. “We were in different majors, so we didn’t have classes together.”

The SIUE Alumni Association helped coordinate the visit after receiving a call from one of the Moss’s sons, Jason, who conceived the idea of bringing his parents back to where they first met.

“I thought, ‘what on Earth am I going to get these two for their 50th anniversary?’” he recalled. “Then, about six months ago, I was on campus with my kids and while they were busy, I came to the library to check my email. Everyone was so helpful and friendly. I realized my parents would probably enjoy getting to see how things have changed here since they were student workers.”

During their tour led by Library and Information Services Interim Dean Lydia Jackson and Interim Assistant Dean Juliet Gray, the Moss’s found the technological advancements to be the library’s most noticeable change.

“There are fewer hardback books and more open spaces for the kids to study and collaborate,” Richard said. “But, I can still picture how the library looked back in 1966.”

The Louis H. Sullivan Architectural Collection brought back fond memories for the Moss’s. They also recalled that the University Center was being built during their years at SIUE. It was an exciting addition when it opened, they said.

In honor of their return to the library, Jackson and Gray presented the Moss’s with an engraved frame to hold a photo from their visit, a book about the Mississippi River Festival and a disc of images of Lovejoy Library from the years the Moss’s were on campus.

School of Education, Health and Human Behavior Interim Dean Paul Rose and Director of Development Karen Wicks also joined the celebration. They presented the Moss’s with SIUE t-shirts and a beautiful clock. In addition, the Alumni Association gave the Moss’s an assortment of SIUE-branded items.

The key to their 50-year marriage? The Moss’s agreed they have many common interests: both were long-time educators, love to travel and enjoy Indian culture. They also said they’ve always supported each other’s individual interests as well, which offered a successful and happy balance.

Photo: Ann and Richard Moss smile behind Lovejoy Library’s circulation desk, the place they first met more than 50 years ago.