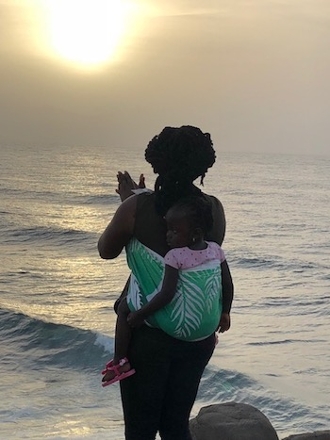 Diouf with her daughter, Annette, watching the sunset in Senegal.

When Assistant professor of English Emilie Diouf first learned she won the Wellington Prize, her first thought was about how her colleague Anita Hannig used the prize money on a daring rock climbing excursion last year.

“I’m not so adventurous,” Diouf said with a laugh. 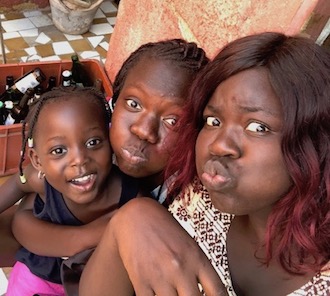 Diouf’s daughter, Annette, with her aunts.

So, Diouf came up with something practical for the award. And meaningful. The Wellington Prize was established by an anonymous donor in 1993 who wished “to enliven the spirits and delight the senses of assistant professors.” Winners are selected at random at the final faculty meeting of the year and can use the award in nearly any way they see fit.

Diouf decided to put her prize money toward a trip home to Senegal with her 2-year-old daughter, Annette. Diouf, who moved to the United States in 2008 to pursue an master’s degree and PhD at Michigan State University, had not been to Senegal in three years, and her daughter had never been before. They visited with relatives and friends in Dakar, Thies, Mbour, and Joal- Fadiouth over seven weeks in July and August. Her daughter developed her fluency in Wolof, the most widely spoken language in Senegal, and built closer bonds with her relatives, who were previously only familiar from the phone and Skype.

“It made her ties to Senegal real,” Diouf said.

Even though the Wellington Prize isn’t supposed to be used for research purposes, Diouf said the trip has also informed her work. Diouf’s scholarly specializations include African Women, migration, and trauma, and she learned something about the meaning of the return journey for the migrant.

As a migrant whose sensibilities are framed by the context of African Diaspora conditions, Diouf wanted to explore the ways in which Senegal has preserved the cultural memory of the Atlantic Slave Trade as well as more recent forms of forced displacement. Their cultural memory excavation took them to the monument of African Renaissance in Dakar and the House of Slaves and its door of no return on Gorée Island.

“I didn’t realize I missed home so much until I got there,” Diouf said. “I needed to re-root myself to be reinvigorated.”