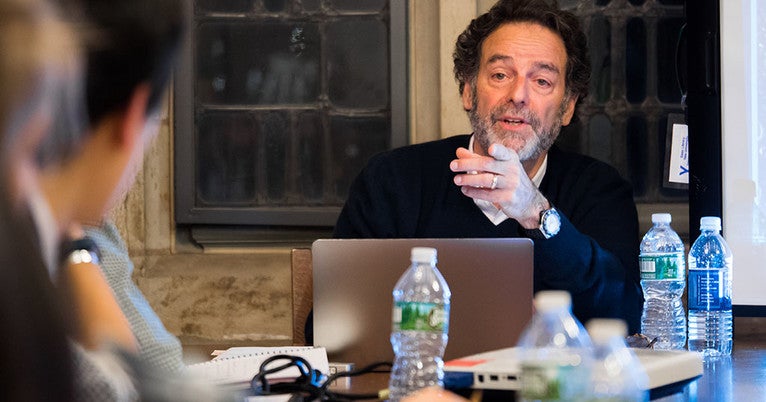 A new series of student-sponsored master classes is bringing top-level political operatives to campus, not to talk about their ideologies or partisan points of view, but to reveal the secrets of their winning strategies — completely off the record.

In fact, “Off the Record” is the name of the series, which was developed by the Yale Politics Initiative (YPI), a non-partisan, student-run departmental initiative that aims to bring students together with political leaders, operatives, and activists from across the political spectrum to inspire careers in politics and public service.

“It’s an opportunity to hear from political practitioners about what they do best,” said Michael Michaelson ’20, who co-founded YPI with classmate Paul Gross ’20. The idea for the initiative grew out of a conversation they had last year in Grace Hopper dining hall. Both are interested in becoming politically involved, and both wanted to learn more about the practice of politics — as opposed to political theory, philosophy, or policy — from the campaign strategists, activists, and leaders who make change happen.

Despite the fact that neither is a political science major (Michaelson’s is history, Gross’ statistics and data science), the two took their idea to the Department of Political Science, which provided support through the Block and Strickler funds.

The classes were first offered in the spring and featured such notables as Joel Benenson, Hillary Clinton’s chief strategist and Barack Obama’s lead pollster; Patti Solis Doyle, an adviser to the Obama and Clinton campaigns; Frank Luntz, a political consultant known for developing talking points and other messaging for various Republican causes; Tony Podesta, a Democratic lobbyist; and Jeff Roe, a Republican political consultant and strategist whose clients have included Ted Cruz, Mike Huckabee, and Rick Perry.

Each master class is 2.5 hours long, and is capped at 25 students, who are chosen to represent diverse aspects of the Yale community, including a range of majors and political ideologies. The instructors come prepared with outlines, videos, and case studies.

“Of course, students butt in with their questions,” says Gross, and the usually verbally dexterous professionals answer “without too much spin.”

In fact, says Michaelson, the speakers have “dropped some bombshells in class” — “bombshells” that are, of course, off the record.

To learn more about the Yale Politics Initiative, visit the group’s website.