We don’t know for sure because we’ve never been able to take a picture of one. That may all be about to change. 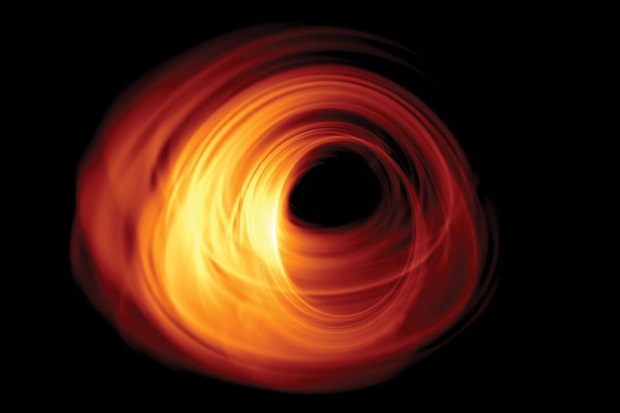 Courtesy of the EHT.

At the center of our galaxy lies a swirling, energy-spewing supermassive black hole called Sagittarius A* or Sgr A*, for short. For billions of years, surrounding gas and dust have been falling into it. Every 10,000 years or so, it swallows a nearby star.

Sgr A* (pronounced Saj-A-star) is the largest black hole in our night sky, but we don’t know what it looks like up close because we’ve never been able to take a picture of it.

This is actually true of all black holes.

They’re ubiquitous in our universe, but they’re so small in the sky, we don’t have a detailed image of any of them.

Those pictures you see on the web or in TV documentaries are illustrations or simulations based on indirect evidence — observations of the region of space around the black hole. Scientists don’t doubt black holes exist, but without an image, they can’t prove it for certain.

This all may be about to change.

For the last four years, professor of astrophysics John Wardle has been working with a team of roughly 200 scientists and engineers to create an image of Sgr A* that would be our first ever picture of a black hole. The initiative, called the Event Horizon Telescope (EHT), finished collecting data in April 2017. Researchers are currently analyzing it.

Depending on the results, the image they produce of Sgr A* may look like one of these:

Computer simulations of the images EHT researchers hope to generate. The bright regions are hot gas surrounding the black hole. The circular dark region is a shadow cast by the strong gravity of the black hole. (Courtesy of the EHT.)

This may not seem like much but generating this rough of a picture of Sgr A* is the equivalent of reading a newspaper headline on the moon while standing on Earth.

In fact, it is good enough to answer some of our biggest unanswered questions about one of the universe’s most mysterious phenomena: What do light and matter look like as they fall toward a black hole? What are the streams of energy shooting out of black holes made of? What role did black holes play in the formation of galaxies?

Though it’s unlikely, results from the EHT could even require adjustments to Einstein’s general theory of relativity.

But before we get to whether one of the greatest scientists who ever lived didn’t get it quite right, we have to start with the basics.

Black holes typically happen when a very massive star burns through its nuclear fuel and collapses cataclysmically into an incredibly dense point, or singularity.

It turns out that black holes are everywhere. Supermassive ones lie at the center of most galaxies. Less massive black holes are much more common. Our galaxy, the Milky Way, likely has around 100 million black holes, though we’ve only identified a few dozen of them.

As for Sgr A*, it’s about 26,000 light-years away from Earth with a mass four million times that of the sun. That makes it “wimpy” compared to other supermassive black holes, Wardle says. The other supermassive black hole the EHT studies, Messier 87 (M87) at the center of the Virgo cluster, has a mass of nearly seven billion times that of the sun.

Though it’s unlikely, results from the EHT could even require adjustments to Einstein’s general theory of relativity.The EHT chose Sgr A* and M87 because they are the largest supermassive black holes when viewed from Earth. They’re the easiest and most accessible candidates for study.

But how can we take a picture of a black hole when it’s black?

Good point. In fact, black holes are as black as the blackness of space. Any light that enters never escapes.

But around a black hole, there is light from a luminous swirl of superheated matter yet to fall into the black hole. When the light passes near the event horizon, it bends and gets distorted by the pull of the black hole’s strong gravity.

You get the picture: By studying the black hole’s shadow, the EHT researchers can figure out a heck of a lot about the black hole.

But since imaging a black hole isn’t an option (at least not at present), scientists consider an image of the shadow conclusive evidence of a black hole’s existence.

When Wardle started out in astrophysics in the late 1960s analyzing radio waves emitted by galaxies, “black holes were just a curiosity that may or may not have existed,” he said. “They were a slightly disreputable field for an astronomer to be in.”

But a few years later, the field exploded, and since black holes power energetic jets that emit radio waves, he naturally gravitated in their direction (no pun intended).

As part of the Brandeis Radio Astronomy Group, Wardle studies “active galaxies,” a relatively rare type of super-luminous galaxy with supermassive black holes at their center.

Sgr A* is so small in the sky that we don’t have one single telescope on Earth that can see it in enough detail to create a high-resolution photo. 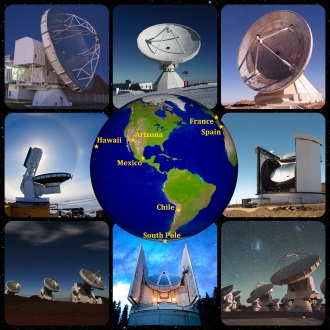 The EHT consists of seven networked telescopes. The telescope in Greenland is so far north that it cannot see Sgr A*, which is in the southern sky. (Credit: APEX, IRAM, G. Narayanan, J. McMahon, JCMT/JAC, S. Hostler, D. Harvey, ESO/C. Malin.)

The EHT scientists overcame this by networking seven telescopes around the globe using a technique called very long baseline interferometry (VLBI). The result was a “virtual telescope” with the resolving power of a telescope the size of the diameter of Earth.

For a week in April of 2017, all seven of the EHT telescopes were recording signals from Sgr A*. Seven atomic clocks recorded the time of arrival of the signals at each telescope.

The nature of the signals and when they arrive at each telescope will enable scientists to work backward to construct a picture of Sgr A*. This is going to take a while to complete. The EHT telescopes collected enough data to fill 10,000 laptops.

Wardle is especially interested in finding out more about the massive jets of energy that stream from black holes.

The jets form when matter outside a black hole gets heated to billions of degrees. It swirls around in what’s called the accretion disk. Some of it passes the point of no return, the event horizon, and enters the black hole.

But black holes are messy eaters. Some of the matter will be spit out in the form of tightly focused (collimated) jets. The jets travel at close to the speed of light for tens of thousands of light-years.

It’s possible that there are no jets coming from Sgr *A. It’s not been very active in the last few decades.

But if the jets do exist, the EHT’s telescopes will have picked up their radio signals. Then the EHT crew can use the information to try and answer what Wardle says are the big unanswered questions about the jets:

And now, finally, we get to Einstein

Up until very recently, evidence supporting the theory of general relativity (GR) has come from observations of our solar system. But conditions in our little speck of the universe are pretty mild. The extreme conditions found near a black hole will put GR to the ultimate test.

GR should accurately describe how light bends as the black hole’s massive gravitational pull curves spacetime and draws everything towards it. The data gathered by EHT will provide measurements of this phenomenon which can be compared with Einstein’s predictions.

GR’s formulas also suggest that the shadow cast by the accretion disk around Sgr A* will be almost circular. If it turns out to be shaped like an egg, it will tell us something is wrong about GR as well.

Wardle thinks GR will hold up under testing. Still, there’s always the chance GR “may have to be adjusted,” he said. “Then we’ll be in a severe straight jacket because you can’t make changes that mess up all the other bits that do work. That would be very exciting.”