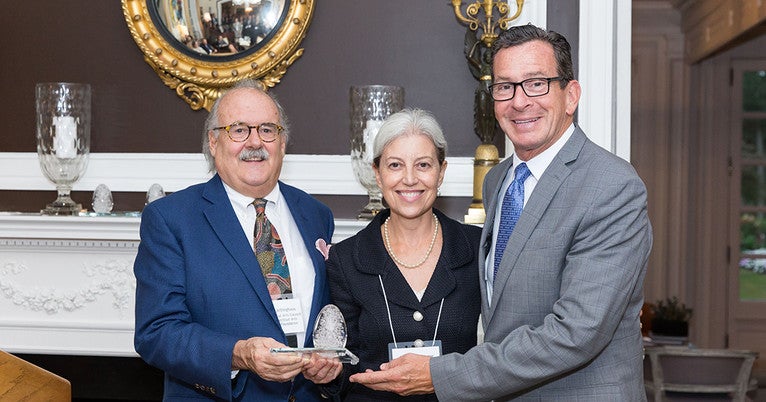 Yale was recently recognized with a 2018 Governor’s Patron of the Arts Award from the Connecticut Department of Economic and Community Development’s (CDEC) Office of the Arts.

Established in 2014, the Governor’s Patron of the Arts Awards honor individuals, companies and organizations for their support of the arts and reaffirm the value of philanthropy for the arts in Connecticut.

At an awards ceremony held on Sept. 27, Yale was recognized for being a vibrant creative and cultural community and for the important role it plays as an educator in the arts by offering an array of visual art educational programming for New Haven school children and community members at locations all around campus.

The award citation praised the quality and breadth of Yale’s world-class museums for enriching the civic life of New Haven and noted that the Yale Center for British Art, Yale University Art Gallery, and Beinecke Rare Book and Manuscript Library each strive to cultivate an appreciation and understanding of art by making original works of art available for public viewing.

It was also noted at the ceremony that Yale, through its academic programs, its engagement in the schools, and its dramatic and musical performances — by both professional and student groups — contributes to the cultural life of Connecticut and serves to define and distinguish Connecticut in a favorable way.

“We are extremely proud to recognize these individuals and organizations for their extensive contributions to the arts community and our state’s overall quality of life,” said Catherine Smith, commissioner of DECD.

Other 2018 recipients of the award were United Technologies, Grace Farms Foundation, and Fritz Jellinghaus, who received special recognition at the ceremony for his 30-plus years of dedication to the arts community and for his service on the Commission on the Arts, now the Connecticut Arts Council.