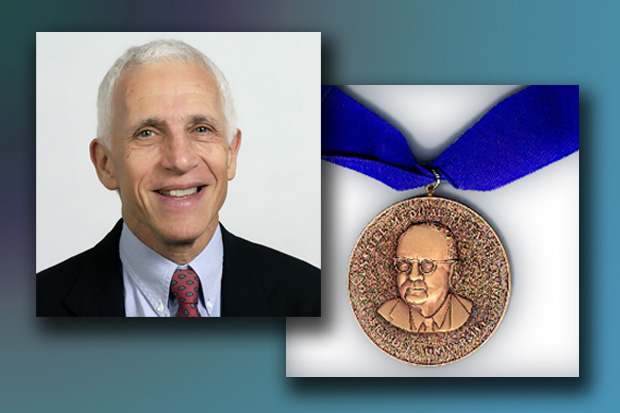 The 48th Rosenstiel Award for Distinguished Work in Basic Medical Research has been awarded to Professor Stephen C. Harrison for his fundamental and far-reaching studies of protein structure using X-ray crystallography.

His work has ranged from the landmark elucidation of the structure of viruses, to understanding the recognition of DNA sequences by transcription factors, to the regulation of protein kinases implicated in cancer.

Harrison’s initial studies of virus structure were a technical tour-de-force and provided an understanding of how viruses invade cells and how virus particles are assembled. He has extended his work to reveal the structures of many viruses, including influenza, HIV, Ebola and dengue.

Knowledge of these structures is guiding the development of new vaccines against these deadly viruses. Moreover, the methodology that he and his colleagues developed to visualize virus structure has made it possible to learn about the molecular architecture of other very large assemblies of proteins.

Harrison’s lab has also revealed the ways that proteins recognize specific DNA sequences to regulate gene expression. More recently, his lab has been exploring the complex structure of the many proteins that are assembled in the kinetochore, which anchors the centromeres of chromosomes to microtubules, to permit their proper segregation in mitosis.

“Steve Harrison has done much more than giving us astonishing pictures of proteins at the atomic level; he has used this structural information to show us how these proteins perform their precise functions,” said James E. Haber, Director of the Rosenstiel Center for Basic Medical Sciences.

Harrison is the Giovanni Armenise-Harvard Professor of Basic Medical Sciences and director of the Center for Molecular and Cellular Dynamics at the Harvard Medical School. He is also Head of the Laboratory of Molecular Medicine at Boston Children’s Hospital and an Investigator of the Howard Hughes Medical Institute.

The Rosenstiel Award will be conferred at Brandeis University on March 25, 2019, when Professor Harrison will present a public lecture on his accomplishments.

The Rosenstiel Award has had a distinguished record of identifying and honoring pioneering scientists who subsequently have been honored with the Lasker and Nobel Prizes. In 2017 Rockefeller University Professor Titia de Lange was named for her pioneering work on how cells preserve the integrity of their chromosomes. In 2016, Professor Susan Lindquist was cited for her work on the association of protein aggregation and neurological disease. In 2015, Professor Yoshinori Ohsumi was the recipient, for his description of protein degradation through the process of autophagy. Thirty six of 90 Rosenstiel Award winners have been awarded The Nobel Prize in Physiology or Medicine or in Chemistry.