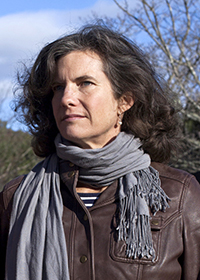 Felicia Keesing, of Bard College, led a new study of wildlife-livestock interactions on the savannas of central Kenya.

CHAMPAIGN, Ill. — A study of 3,588 square kilometers of privately owned land in central Kenya offers evidence that humans and their livestock can, in the right circumstances, share territory with zebras, giraffes, elephants and other wild mammals – to the benefit of all.

The study, reported in the journal Nature Sustainability, focused on Laikipia County in central Kenya.

“Laikipia County hosts 10 percent of Kenya’s wildlife, but none of the country’s national parks or preserves,” said University of Illinois entomology professor Brian Allan, who conducted the study with Bard College professor Felicia Keesing. “Most people depend on livestock for income and almost 70 percent of the land is devoted to large-scale ranching or pastoralism,” Allan said.

As human populations increase, so does the pressure to expand agricultural and pastoral areas into grasslands now dominated by wildlife.

Wildlife tourism is another source of revenue for landowners, however, as the area hosts exotic white and black rhinoceroses, Grevy’s zebras and painted dogs, Keesing said. 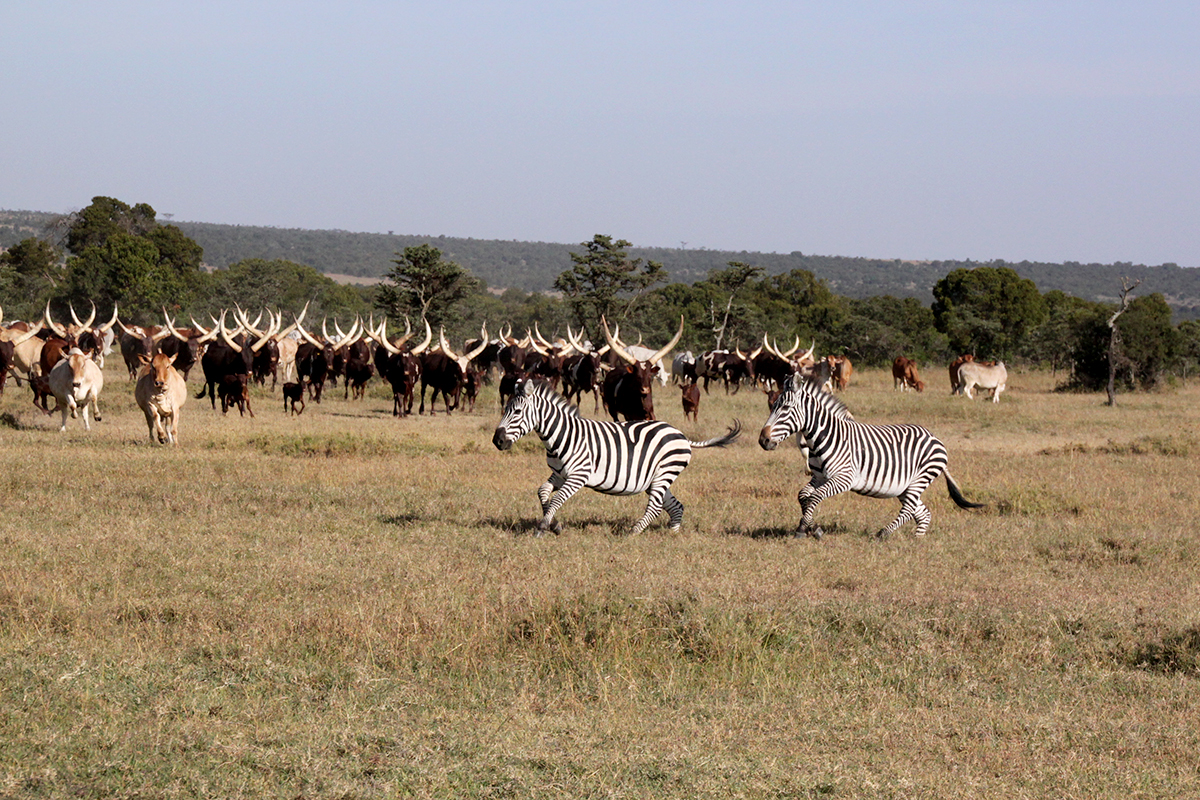 A new study finds evidence that livestock and wild mammals sometimes benefit from grazing on the same lands in central Kenya.

“This is leading some to remove traditional barriers between livestock and wildlife because there are benefits to having multiple sources of income,” she said.

There are big potential downsides to allowing livestock and wildlife to share territory, however, the researchers said. Wild cats sometimes prey on domestic animals. Wildlife and livestock may compete for water and grazing resources. They also can share diseases, including tick-borne infections like East Coast fever, Q fever and bovine anaplasmosis. 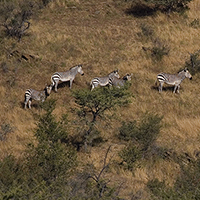 “There is no greater diversity of tick species anywhere on the earth than in eastern and southern Africa,” Allan said. “And many of the ticks are host generalists, meaning they’ll happily feed on a cow, a gazelle or a zebra – and they’ll also bite humans.”

To determine the ecological and economic effects of raising livestock on territory also used by wildlife, the researchers surveyed tick abundance, vegetation and the dung of large herbivorous mammals on 23 Laikipia County properties in July-August, 2014 and 2015.

“We identified the ticks and sequenced DNA of tick-borne pathogens to identify infectious agents associated with the ticks,” Keesing said. The team also interviewed managers and owners of each property about the type and abundance of livestock on their land and the percent of revenue derived from wildlife tourism and livestock operations.

The researchers found that the practice of regularly spraying cattle with acaricides, which kill ticks without directly endangering birds or other creatures that feed on ticks, dramatically reduced the number of ticks in the grazed areas.

“Reducing the number of ticks is one key part of a strategy to reduce the transmission of tick-borne diseases,” Keesing said. “These diseases can sicken and kill people, livestock and wildlife, which is particularly devastating in a vulnerable ecosystem experiencing many competing demands.”

About 16 percent of the ticks collected on the study sites carried at least one bacterial or protozoal infection, the scientists found. There was no difference in the proportion of infected ticks found on properties devoted entirely to wildlife and those where wildlife and livestock were integrated. Tick abundance, however, was 75 percent lower on integrated properties than on those hosting only wildlife.

Livestock- and wildlife-related income accounted for more than 70 percent of revenue for the properties studied. Wildlife abundance was highest on properties with moderate densities of cattle – but not on land supporting sheep and goats, the researchers found.

There was less green grass on livestock-only and wildlife-only properties than on land shared by both, the researchers found. The quality of the forage also was highest on integrated lands. 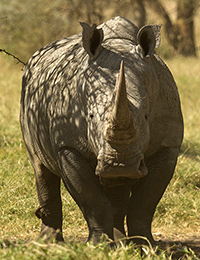 Tourists travel to the study area to see exotic animals, like this white rhino.

These findings suggest that certain management practices can enhance the viability of livestock operations while also maximizing wildlife abundance and health on the same lands, the researchers said.

“It has been the attitude of conservationists that conservation lands must be kept secure and undisturbed from human uses, including livestock production, and I can sympathize with that perspective,” Allan said. “But our data are starting to suggest that there could be circumstances where livestock-wildlife integration can work – for the benefit of all. A productive savanna ecosystem may be the perfect place to try it.”