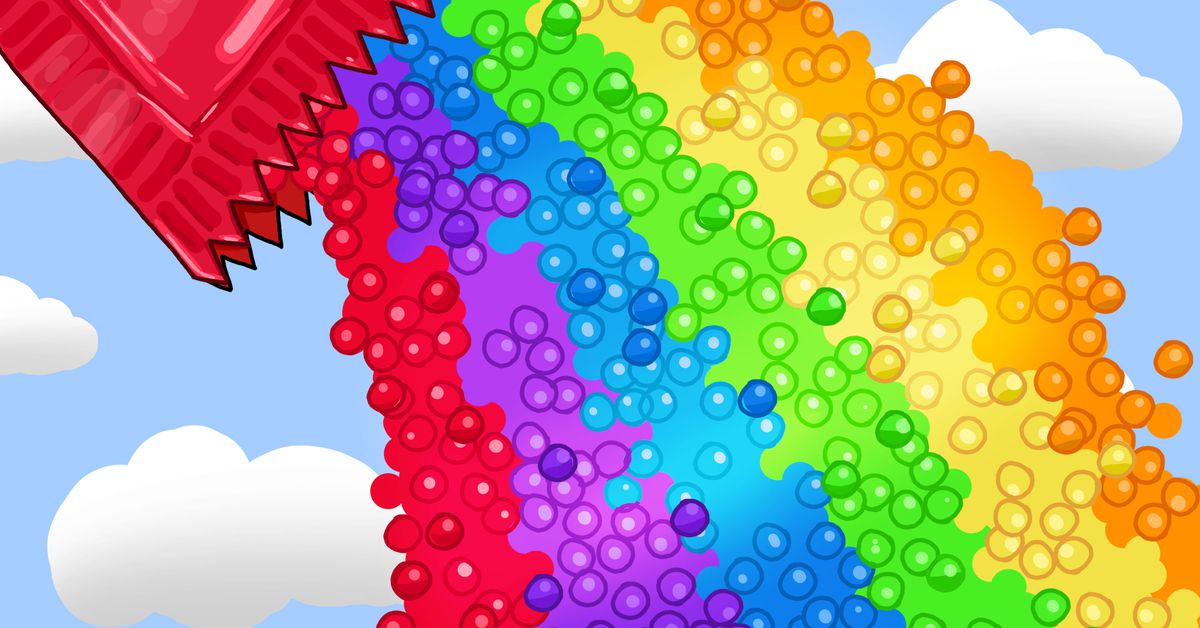 Next year marks the 25th anniversary of “Taste the Rainbow,” the iconic and enduring Skittles ad campaign. The Skittles commercials and brand identity have conformed to the increasing absurdity of each passing era, to varying degrees of success, but it’s the association with rainbows that has taken on a life of its own. “Taste the Rainbow” became as prismatic as its inspiration. Skittles could be just about anything to anyone.

They were the “power pellets” for a young Marshawn Lynch, who attributes his success from Pop Warner football to the NFL to Skittles. They were a symbol of youth and innocence after the killing of Trayvon Martin in 2012, and a symbol of everything wrong with the agricultural industry when it was discovered that the thousands of Skittles that spilled out of the flatbed of a truck in 2017 were destined for a farm to be included in animal feed. They were used by Donald Trump Jr., infamously, to represent the Syrian refugee crisis.

The Skittles origin story isn’t nearly as fabled as its marketing. It was launched in 1963 in the U.K., sold under the name “Glees” for more than a decade. Evidently, Glees weren’t a major fixture in public memory. A quick search on the existence of Glees yields only comment threads light on effusive nostalgia and heavy on the sinking feeling of the “Mandela Effect.”

Today, nearly 45 years later, Skittles is the most popular (non-chocolate) candy in America, and perhaps the most widely referenced synesthetic device in mainstream culture, willed into being through its iconic tagline.

In the early 1970s, a food scientist at Colorado State University named Joseph A. Maga had a group of 28 students taste a few colors of the rainbow. Water solutions that contained various concentrations of the four basic flavors (sweet, salty, sour, and bitter), were dyed red, green, and yellow. Some were left undyed. Students were asked to taste the solutions and evaluate the experience. When students tasted the green solution, their palate’s sensitivity to sweetness increased, perhaps in the mind’s preemptive defense against the bitterness associated with leaves and vegetables. When they tasted yellow, their sensitivity to sourness decreased, perhaps in bracing for the tartness of the lemon that yellow so often symbolizes. Maga’s conclusion: “psychological color association can alter reports of certain basic taste sensations.” The findings were published in the first issue of Chemical Senses on New Year’s Day, 1974.

Later that year, a colorful confection known as Skittles was introduced to the United States from the U.K.

Of course, Skittles wasn’t the first candy to perfect the colorful hard-shell coating encasing a softer center candy. M&M’s, created roughly three decades before the existence of Skittles, were invented in wartime, and inspired by wartime: “Melts in your mouth, not in your hands” wasn’t a slogan meant to be imaginative; it was a pragmatic bit of reassurance for soldiers looking for reprieve amid unsavory circumstances. The brown, blue, green, red, orange, and yellow on M&M’s have no underlying significance, nor do they denote different flavors, but we all have our favorites. I’ve always been partial to orange Peanut M&M’s—it’s the same orange as the Reese’s Peanut Butter Cup packaging, and while there is no compositional difference between an orange M&M and a blue one other than the dye, the orange pieces always seem to taste a little bit better than the rest. The mind allows for that color connection to create almost palpable flavor associations, intentional or not.

Last year, Skittles unveiled a new “Sweet Heat” varietal at the National Confectioners Association Sweets & Snacks Expo in Chicago, and it hit nationwide distribution back in March. It felt like targeted marketing. My devotion to capsaicin is well documented in this space, but it’s more than searching for a cheap thrill; when applied correctly, even a little bit of spice can shift flavor dynamics completely. I had an unhealthy obsession with Mexican fruit-flavored candies covered in chile powder growing up: mango, rebanaditas (watermelon), and pica fresa (strawberry). It was overwhelming to learn that Skittles had taken inspiration from those very profiles. I was potentially looking at my new favorite confection.

No dice. The flavors themselves are mostly fine, except for mango (which I’d unfortunately had the highest hopes for). “Blazin’ Mango” tastes like a bout with heartburn in the storage closet of a Bath & Body Works. The best spicy dishes offer a quick introduction to the palate before doling out the punishment—a signal that gives you a sliver of time to brace for impact. Sweet Heat Skittles offer no such welcome; they don’t offer much of anything. It’s a typical Skittle experience, except by the end of it, you’re left wondering if you might have to stop by a CVS for some allergy medication for your sore throat. I never thought I’d describe a commercial candy experience as annoying, but here we are.

I was disappointed, not in the heat level but in execution. It was the first time I’d felt that Skittles didn’t have a grasp on what made certain sensations compelling to the consumer.

In January, Brandeis neuropsychologist Don Katz sent the internet into a minor panic when he explained to WFPL, the Louisville NPR affiliate, how Skittles were a master class in sensory manipulation. “The Skittles people, being much smarter than most of us, recognized that it is cheaper to make things smell and look different than it is to make them actually taste different,” he said. “So, Skittles have different fragrances and different colors—but they all taste exactly the same.” It led to a lot of blind taste tests, a lot of repudiations, and a lot of worlds being bent askew.

But deep down, is what Katz said at all surprising? There are five different colors in each bag of Skittles, meant to correspond to a specific fruit flavor or combination. An actual grape and an actual lemon share very few taste notes, but in the realm of confectioneries, there is almost a gauze of muted familiarity that laces each individual piece, to create a comforting uniformity. In 2013, apparently due to popular demand, Skittles changed the green flavor from lime to green apple. There have been countless petitions made in the intervening years for Skittles to revert back to the original lime, many citing a balance of flavor that has been lost with a distinctively artificial green apple flavor. I, too, find myself longing for lime, but part of me wonders why it matters so much to me. I wonder how much of the supposed “flavor imbalance” has more to do with how the green apple flavor upended memories of the original.

With Skittles, it isn’t a gauze that establishes that comforting sameness we crave, it’s a core. The center of every piece of Skittles is identical, a “toffee,” as it’s known in house, that undergoes an eight-hour “panning” process, which tumbles and coats each Skittles piece with countless layers of thin colored and flavored sugar that hardens into a shell.

Oh, that shell. The next time you pick up a piece of Skittles, place it between your thumb and your index and middle finger, and press down evenly. You’ll feel the coating surrender under the pressure, compress, and fracture into many little shards. Lift it off your fingertips. You’ve created a high-fructose snowflake, unique in its striations. The same sensation can be felt placing a Skittles piece between two molars; you’ll hear it give way. But as soon as that outer shell is compromised, it loses its crunch forever and begins a process that melts it to its core. It’s magic, or something like it. Bon Appétit’s most popular web series on YouTube, “Gourmet Makes,” involved former senior food editor Claire Saffitz attempting to create less industrialized versions of classic American snacks. In June, Saffitz tackled Skittles in what appeared to be a torturous affair; figuring out how to create the shell alone took an entire week of experimentation.

The wonder of Skittles, to me, is how clearly it articulates the interconnectedness of taste. It is one of our four basic senses, yes, but it is also the only one of them that is inherently multidisciplinary—synesthetic, even. We taste color; we taste sounds. It’s all a part of the whole. So the idea of doing blind Skittles taste tests to prove a point … seemed to be missing the point. The flavor of Skittles isn’t one big lie; it’s one sensory experience that contains many disparate elements. Depriving oneself of one of them isn’t setting up an exposé, it’s throwing away a puzzle piece.

The significance of Skittles expands and contracts to fit the perspective of its beholder, much like a prism. Skittles will forever be linked to the iconography of rainbows, embodying one of nature’s great spectral phenomena, compressed into five natural and artificially flavored vessels of color you can taste. Even a blind Skittles test more or less reinforces the connection. Close your eyes and gnash on a few pieces at once—there will be a broad, indistinct sweetness, and not much more. A candied white light.