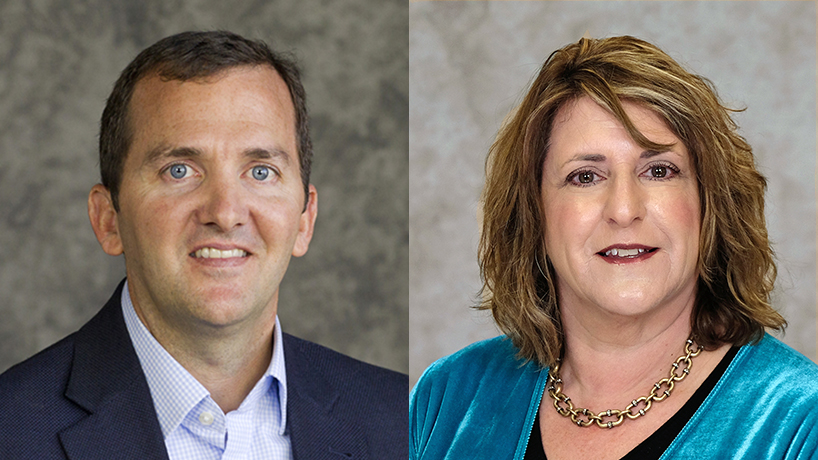 Interim Chair of the Department of Sociology, Gerontology and Gender and retired U.S. Army Lt. Col. Jim Craig (left) and MVHP Board Chair Jill Alexander (right) brought their organizations together to foster the collection of veterans stories. (Photos by August Jennewein)

A new collaboration between the University of Missouri­­–St. Louis’ and the Missouri Veterans History Project gives a home to veterans’ stories.

On Sept. 27, the Interim Chair of the Department of Sociology, Gerontology and Gender and retired U.S. Army Lt. Col. Jim Craig signed a memorandum of understanding to officially begin the joint venture. UMSL will be providing MVHP with a physical address and a manned phone number and email address, and the director of the Veterans Studies Program will have an exofficio position on the MVHP board.

MVHP is an independent, not-for-profit corporation with the mission of capturing the first-hand recollections of veterans in order to provide a richer and more personal context to historical accounts. The organization is composed of volunteer teams of interviewers and videographers, which collect oral histories from veterans living in Missouri.

“The Veterans History Project is a project that the Library of Congress started a number of years ago to capture primarily, at the time, oral histories of World War II vets,” said Jill Alexander, board chair of MVHP and associate teaching professor in the UMSL Department of Communication & Media. “That purpose evolved long term to include any veteran whether they served overseas or not in any branch of the military.”

In the world of Veterans History Projects, the MVHP started with an unusual funding source. Originally, the Missouri project was funded at the state level but came on the allocations chopping block about seven years ago. State Senator Jill Schupp stepped in at that time and advocated for its continuance then helped it incorporate as a standalone 501(c)(3) organization in 2011.

“The purpose of the Missouri Veterans History Projects from the Library of Congress is for researchers to have access to oral histories,” Alexander said. “What better place to house it than where researchers live and breathe and do their work?”

She and Craig began pondering the joint venture approximately a year ago, shortly after Alexander started teaching. UMSL houses the sole veterans studies program in the state, and St. Louis is home to the largest MVHP contingent, so the union seemed ideal.

He imagines the possibility of internships for history or veterans studies students in everything from management to taking oral histories to social media, and he hopes his network of scholars in the veterans studies community will help MVHP reach more voices and donors across the state. He also envisions providing space at the university for MVHP to hold interviews, possibly having regular interview days to collect multiple stories.

“In St. Louis, there’s a waiting list to get interviewed because we don’t have enough volunteers,” Alexander said. “The more people we can get trained, and if we can get student teams trained here on campus to film oral histories of their classmates, that would be a wonderful thing.”

Of the 420 military-connected students at UMSL, approximately 375 are active duty or veterans. In the past, Craig has worked with organizations like the MVHP or The Telling Project to memorialize the stories of UMSL students.

“It’s important for us to listen to the stories of our veterans,” Craig said. “It’s not just so that others can hear the stories. It’s so the veteran can actually tell the story because the veteran is never asked or rarely asked. There’s an assumption that people don’t want to hear, or they have already made assumptions about your service: You’re a hero, and we know it, so we’re not going to ask you anything deeper than that, or you’re broken, and we know it, and we’re never going to ask you anything deeper than that.”

Full-length veterans’ stories can be viewed on the Library of Congress American Folklife Center’s webpage.