A team of researchers from Yale Engineering and Yale’s Quantum Institute has been selected by the U.S. Department of Energy (DOE) to develop the core quantum computing and networking components that would make the uncanny world of quantum physics realistic for computing. 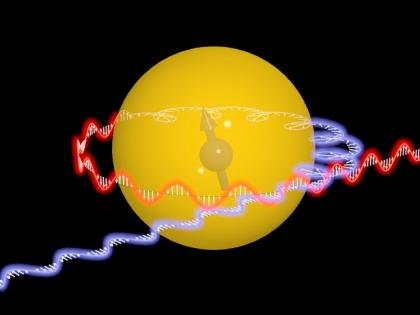 The project, led by Hong Tang, the Llewellyn West Jones, Jr. Professor of Electrical Engineering, is among 28 universities and national laboratories being awarded by the basic energy sciences division of DOE, which is awarding a total of $218 million for the emerging field of quantum information science (QIS). Yale’s three-year grant is for $3.6 million. The awards were made in conjunction with the White House Summit on Advancing American Leadership in QIS.

In addition to Tang, the research team includes Liang Jiang and Peter Rakich, both assistant professors in applied physics; Steven Girvin, the Eugene Higgins Professor of Physics; and Robert Schoelkopf, Sterling Professor of Applied Physics. Charles Thiel and Rufus Cone, professors of physics from Montana State University, are also part of the team.

The project focuses on finding new materials for the hardware of quantum computing. In classical computers, the transistor talks to a memory cell, which stores the information. In quantum computers, though, some of the quantum bits of information – known as qubits – excel at computing tasks but have a short lifetime. Others have extended lifetimes but are less capable of logic operation. Plus, the two types of qubits are often hosted in different materials. Yale researchers have previously perfected the qubits made from superconductors for quantum computing tasks. The memory qubits, however, remain elusive. Finding the right kind of memory material is critical. To that end, the team has identified rare earth ions as quantum memories, which are the expertise of the Montana collaborators.

“The wiring between the qubits and the memory is not as simple as it is in a regular computer, so we need to develop some connection mechanism to allow the operation qubits to talk to the memory qubits,” Tang said. “We need to get better materials to improve quantum information science – material that has less noise and a high coherence.”

While Tang, Rakich and Schoekopf will work on the hardware components of the project, Girvin and Jiang will focus on the theoretical side.

“We need a significant theory support because each individual system is still not well understood,” Tang said. “Even for the common materials, there are many things we don’t understand about the interface, such as defects and noise process. Our goal is to understand this noise process and to make the lifetime of these qubits longer.”

Girvin said he and Jiang will work on the question of how material environments cause the rare earth ions to lose the memory of their quantum state, a phenomenon known as decoherence. The researchers noted that the project would be impossible without both the theoretical and engineering sides working on it.

“This is a complex project requiring multiple people with deep expertise in materials science, optics, microwaves and cryogenics, as well as quantum experiment and theory,” Girvin said. “We are trying to create a new discipline of ‘quantum engineering’ that connects the implausibly strange world of quantum physics with practical device and systems engineering. This simply cannot be done without an interdisciplinary team.”