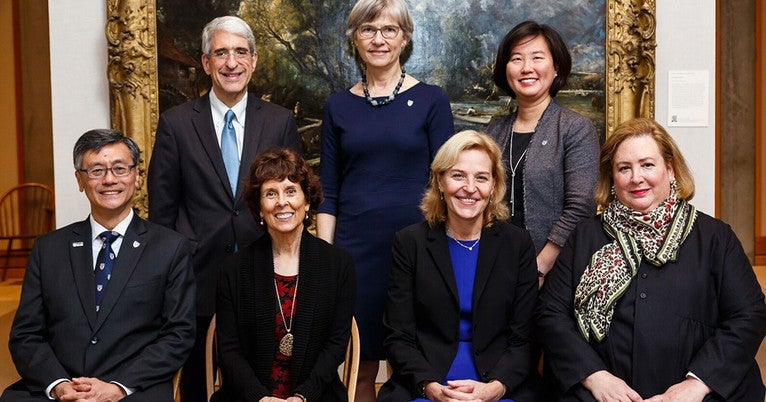 The four winners of this year’s prestigious Wilbur Lucius Cross Medal have left indelible marks on their respective fields, but they haven’t stopped there.

“We are so proud of our Graduate School Wilbur Cross medalists,” said Lynn Cooley, dean of Yale’s Graduate School of Arts and Sciences. “They have the common thread of unstinting, continuing effort to advance not merely their own positions and careers, but also to selflessly share their knowledge with others to the benefit of us all.”

Anna Barry, chair of the Graduate School Alumni Association (GSAA) noted, “The medal is the highest award bestowed by the GSAA, and recognizes alumni who have excelled in scholarship, teaching, academic administration and public service. This year’s medalists are an inspiration and we are delighted to recognize them with this honor.”

The medalists were honored during a gala dinner at the Yale Center for British Art attended by Yale President Peter Salovey, Cooley, faculty, members of the nominating committee and the GSAA, and friends. All four awardees gave talks at Yale on Oct. 8 to share lessons learned and discoveries made.

In a conversation with Mary Miller, Sterling Professor in the History of Art, Easton talked about her efforts to shape the next generation of museum leadership through her Center for Curatorial Leadership in New York City. Its five-month fellowship program has trained some 122 curators serving at museums across the world to develop key skills in formulating and advancing a museum’s mission via technology initiatives, fundraising campaigns, and audience development. The goal of the program is to prepare these curators to further the role of art in shaping culture and public discourse.

Martin is the first woman dean of UCLA’s medical school and one of only a few women leading a medical school in the U.S. She was first drawn to medicine during a Peace Corps trip in Central Africa where she had to set up a vaccination program to prevent measlesfor 30,000 children in a rural area. Martin said she imagined that she might go into public health when she returned, but working in the lab of I. George Miller Jr., the John F. Enders Professor of Pediatrics at Yale, she was instead drawn to basic science research. Martin spoke at Yale about “Regulating Gene Expression in Neurons to Store Long-term Memories,” a central focus of her research — particularly in regards to the roles played by emotion and attention in memory formation.

Mithun shared details about her work uncovering the mysteries of gender usage in the Mohawk language. She noted that the Mohawk people are matrilineal — both clans and land are inherited through the mother, and women are responsible for the land and appoint chiefs. Given this background, said Mithun, it is perhaps not surprising that feminine serves as the default in certain aspects of the language, in the same way that masculine typically does in English.

But in her research, Mithun found that the linkage between culture and language was not so straightforward: There are two feminine categories employed in the Mohawk language: the feminine-indefinite, used for some feminine individuals as well as for non-specific individuals of either gender, and the feminine-zoic, used for other feminine individuals and for animals. The fluent Mohawk speakers she engaged with were often not aware that they alternated between the forms, she said, but, when pressed, some explained that the zoic form was reserved for women who were either louder and more assertive, or someone they didn’t know well. “Women were horrified when they realized they used one form for one daughter and one for another,” Mithun said, noting that “the mother decides for the baby girl and that characterization stays for life.” Analyzing the structure of the Mohawk language allows Mithun to create methods for teaching it to new generations, ensuring it won’t be lost.

Tan has served as the president of the National University of Singapore since January 2018, and has held leadership roles there since the mid-90s, shepherding the school through many moments of transition. “Yale has shaped the way I think about higher education,” Tan told students and faculty in one of the mathematics classrooms in Leet Oliver Memorial Hall. Tan said the biggest challenge for state universities like NUS “is how to scale quality.” He spoke of his university’s embrace of innovation in collaborating with other universities, including Yale in 2013, and encouraging students to work with startup companies and embrace the concept of failure as a means to success.

“When we fail, we build resiliencies that can guarantee success later on,” Tan said. Much of his passion for education stems from his years at Yale, Tan said. “At Yale, I was touched by the passion of the professors.”