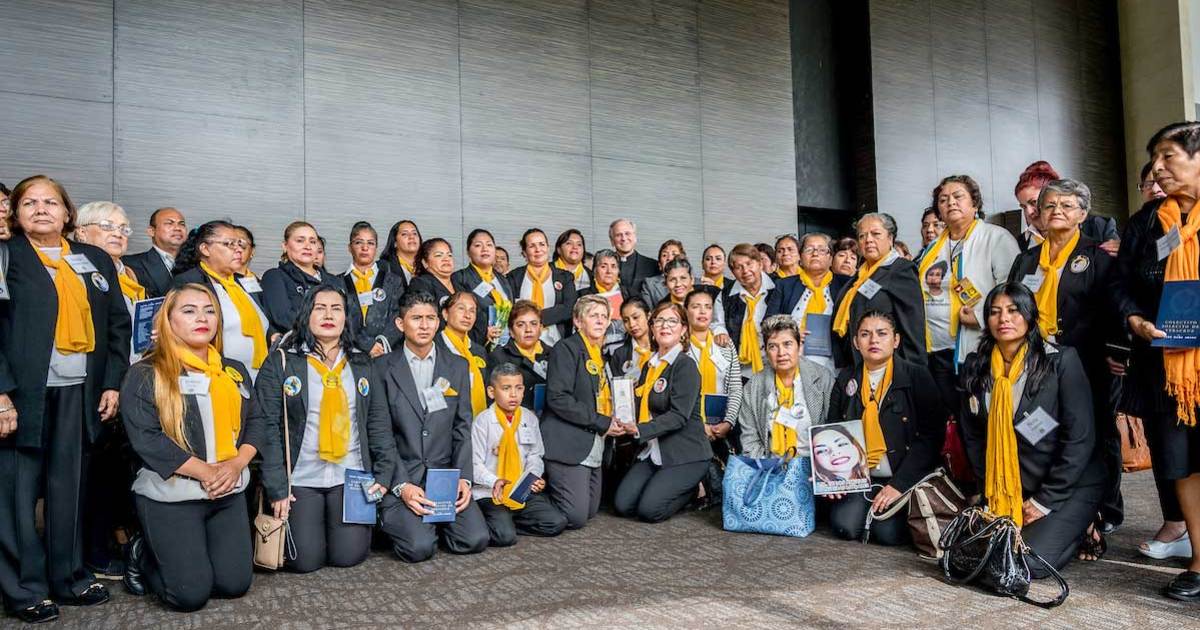 A grassroots group of mothers searching for their missing loved ones in Mexico’s Gulf state of Veracruz received the 2018 Notre Dame Award Tuesday for their tireless work on behalf of victims of drug violence and dedication to seeking truth.

The University’s president, Rev. John I. Jenkins, C.S.C., personally greeted more than 100 members of the Colectivo Solecito de Veracruz attending a breakfast in Mexico City in their honor as they filed to the stage and photographs of their missing loved ones flashed on overhead screens.

The group was recognized as emblematic of Mexican civil society’s demand for justice for the deaths and disappearances in the country’s 12-year-old war on organized crime. More than 30,000 people have gone missing in that time, according to government estimates. Authorities across the country have been slow or reluctant to investigate, causing citizen groups such as Colectivo Solecito to take up the work themselves.

“They and other mothers from colectivos across Mexico have carried the burden of not knowing what happened to their missing loved ones. Or the burden of learning, only much later, that their loved ones were murdered,” Father Jenkins said. “The University of Notre Dame, named for the Blessed Mother, honors these women today with the Notre Dame Award, an international recognition conferred on only 10 persons previously, including Mother Teresa.”

In accepting the award, Lucia de Los Angeles Díaz Genao of the Colectivo told the story of the mothers sitting in government offices day after day, looking for help, for something to happen, only to see the cases languish and collect dust.

“We learned at once that it was much easier and less painful to fight than to stay passive and wait,” Díaz said. “Finally, we learned that the struggle is long, and that it is essential to keep fighting, putting our hearts into it, with the hope that one day we will come out of the darkness and our motto becomes reality. … The sun will shine again.”

On Monday, Father Jenkins concelebrated mass officiated by Veracruz Roman Catholic Bishop Luis Felipe Gallardo Martín del Campo in Veracruz at the site of one of the largest mass graves in Mexico.

Solecito Colectivo started as a group of eight mothers in 2014 who decided to dig in areas rumored to be mass graves in search of human remains. They raise their own money to pay for the searches and initially received no help or recognition from the state government or justice system in Veracruz.

Then in 2016, the group received a huge tip from an anonymous source: a map depicting the exact locations of more than 120 clandestine graves at Colinas de Santa Fe, the site of Monday’s Mass. The group’s search so far has led to the discovery of 295 bodies and some 22,000 fragments of human remains. They now have the help of state and federal authorities, but identification of those remains has been slow.

The award was presented before the start of a one-day conference on “The Challenges of Transitional Justice in Mexico” organized by Notre Dame in Mexico City. Convening a group of international practitioners, members from the incoming Mexican government, groups of victims and their families, international and Mexican scholars and members of Mexican civil society, the conference will explore how a process of truth, justice and reconciliation for the victims of the country’s drug war may be implemented.

The Notre Dame Award was first presented in 1992 and recently was revived to honor the “women and men whose life and deeds have shown exemplary dedication to the ideals for which the University stands: faith, inquiry, education, justice, public service, peace and care for the most vulnerable.”