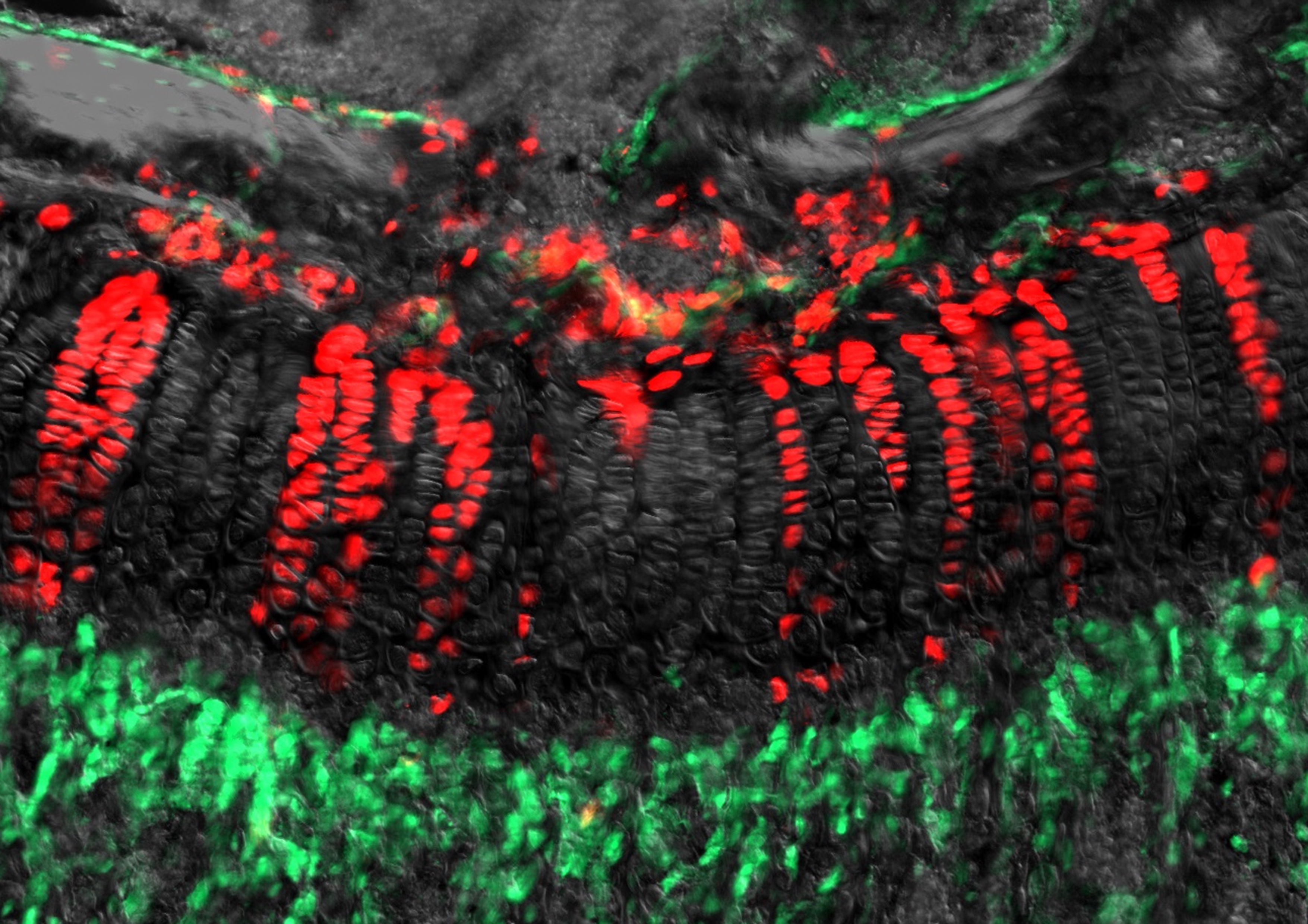 An image of the growth plate (the dark band in the middle), and red cells are the ones that extended from the resting zone (top of the dark band) and reached the bottom. Green cells are osteoblasts, bone making cells – the very bottom is the bone and bone marrow. Image credit: Noriaki Ono

ANN ARBOR—One question that scientists and fitness experts alike would love to answer is whether exercise or nutrition has a bigger positive impact on bone strength.

University of Michigan researchers looked at mineral supplementation and exercise in mice, and found surprising results––nutrition has a greater impact on bone mass and strength than exercise. Further, even after the exercise training stopped, the mice retained bone strength gains as long as they ate a mineral-supplemented diet.

“The longer-term mineral-supplemented diet leads to not only increases in bone mass and strength, but the ability to maintain those increases even after detraining,” said David Kohn, a U-M professor in the schools of dentistry and engineering. “This was done in mice, but if you think about the progression to humans, diet is easier for someone to carry on as they get older and stop exercising, rather than the continuation of exercise itself.”

The second important finding is that the diet alone has beneficial effects on bone, even without exercising. This surprised Kohn, who expected exercise with a normal diet to fuel greater gains in bone strength, but that wasn’t the case.

“The data suggests the long-term consumption of the mineral-supplemented diet could be beneficial in preventing the loss of bone and strength with age, even if you don’t do exercise training,” he said.

Combining the two amplifies the effect.

Most other studies look at effects of increasing dietary calcium, Kohn said. The U-M study increased calcium and phosphorous, and found benefits to increasing both.

This isn’t to suggest that people run out and buy calcium and phosphorus supplements, Kohn said. The findings don’t translate directly from mice to humans, but they do give researchers a conceptual place to start.

It’s known that humans achieve peak bone mass in their early 20s, and after that it declines. The question becomes how to maximize the amount of bone when young, so that when declines do begin, people start from a better position, Kohn said.

In addition to testing bone mass and strength, Kohn and colleagues performed a full battery of mechanical assessments on the bone, which is important because the amount of bone doesn’t always scale with or predict the mechanical quality of the tissue.

The study was published online in PLOS One. Co-authors included Michael Friedman and Robert Szczepankiewicz of the U-M College of Engineering.