Cornel West, Robert George show how to agree to disagree 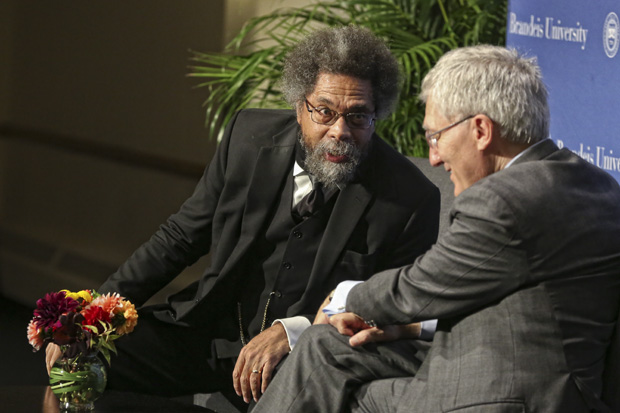 Public intellectuals Cornel West and Robert George never let a spirited political disagreement get in the way of their deep friendship and mutual reverence for learning and open debate.

West, a liberal philosophy professor at Harvard University, and George, a conservative legal scholar at Princeton and research fellow at the Notre Dame Center for Ethics, made an impassioned case for free speech, liberal arts education and truth seeking before nearly 500 Brandeis students, faculty and administrators in Levin Ballroom Wednesday night.

Not only that, the two friends modeled how to disagree with respect, civility, humor and even brotherly affection.

The talk, entitled “Liberal Learning: Open Minds and Public Debate,” was opened by President Ron Liebowitz, who invoked Justice Louis Brandeis, one of the nation’s greatest defenders of free speech. “As Justice Brandeis argued nearly 100 years ago, the best antidote to speech with which one disagrees is not less speech, but more speech,” Liebowitz said.

The professors began by discussing their careers as scholars and their ongoing quest for paideia — the Greek concept of pre-eminence and excellence in learning across all subjects.

“Why do we want open minds, why do we want freedom of speech?” asked George. “We want them because we’ve got a goal that they will bring us nearer and nearer to — never perfectly, we’ll never have all the truth — but we have these norms and convictions and we cultivate these virtues in ourselves and our students to get as close as we can to the truth.”

With gusto and humor, West echoed George’s call for learning and civil public discourse. He told audience members to never be comfortable with what they believe — even their deepest held convictions — and to always allow their opinions to be tested by new information, especially from those with whom they disagree.

“Lift your voice — find out who you are — but at the same time like a jazz musician or blues artist, you have to find your voice, don’t be an echo, don’t be a copy, be an original,” West said.

But he also urged listeners to critically examine their belief systems in order to grow intellectually. “There is no maturity, no growth, no development without giving up certain dogmas, certain doctrines, certain presuppositions,” he said. “… Not just for our development as human beings, but for any possibility of our freedom and democracy.”

Their political differences emerged toward the end of the discussion. West said that government should require large businesses and wealthy individuals to contribute more to the public good. George disagreed, expressing faith that private organizations can sometimes supplant the government in providing welfare to those most in need.

American studies professor Maura Jane Farrelly, with support from the Office of the President, Kent Lawrence ’66 and numerous academic departments and centers at Brandeis, led the effort to bring West and George to campus.