The Oct. 2 disappearance of Saudi Arabian journalist Jamal Khashoggi at his country’s consulate in Istanbul has put a spotlight on the deteriorating relations between Turkey and the Persian Gulf kingdom.

Articles based on anonymous accounts from Turkish officials report that Turkey has video and audio proof that Saudi Arabian agents detained, murdered and dismembered Khashoggi, a sharp critic of his government who lived in Washington, D.C. Turkish President Recep Tayyip Erdogan raised the stakes even further when he said that a search of the Saudi consulate showed evidence of toxic materials that were painted over.

The affair is just the latest to drive a wedge between the two key Middle Eastern powers – countries that have in the past shared close ties to each other and to the United States.

How did their friendship turn frosty?

I’ve been studying and writing about the region for decades. And like with many other relationships in the Middle East, it’s complicated – and that’s why the current crisis could lead to a surprising twist.

Although diplomatic relations between the Republic of Turkey and the Kingdom of Saudi Arabia were established in 1932, neither country showed much interest in the other until the late 1960s.

Turkey’s secular ruling elite was more keen to have strategic and economic ties with the West than to the Arab world. Turkey joined the NATO alliance in 1951 – two years after its formation – and maintained good relations with Israel from the start, much to the disappointment of Saudi Arabia and other Arab countries.

This began to change in the ‘60s and ’70s when Turkey made two moves that led to stronger relations with Saudi Arabia and resulted in increased trade. In 1969, it joined the nascent Organization of Islamic States, based in Saudi Arabia and intended to be a “collective voice of the Muslim world.” And in 1975, Turkey initiated diplomatic relations with the Palestine Liberation Organization, which sought to end the occupation of Palestinian territories in Israel.

Relations continued to improve in the 1980s but deteriorated in the ’90s when the kingdom took Syria’s side in several disputes with neighbor Turkey.

These ups and downs in Saudi-Turkish relations were partly a result of Turkey’s political instability, including several military coups in the ’80s and ’90s. Relations tended to improve when Islamist or civilian parties – which felt close cultural and religious links with Turkey’s Muslim neighbors – were in power but worsened after the military deposed them. 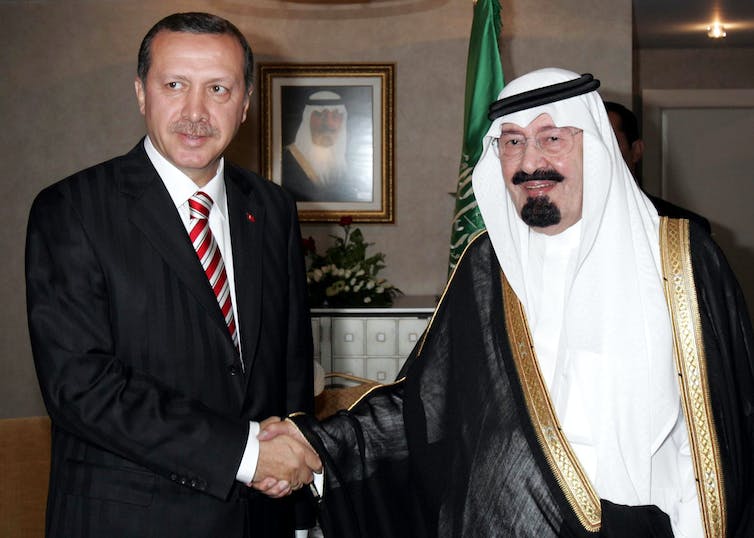 King Abdullah shake hands with Erdogan during the first visit of a Saudi monarch to Turkey since 1966. AP Photo/Umit Bektas

Relations between the two countries found a firmer footing after the Justice and Development Party – commonly known as the AKP – gained power in Turkey in 2002 and continued to improve throughout the decade.

In contrast to the secular governments that had ruled Turkey since 1923, the AKP and its leader Erdogan put a high priority on building stronger relationships with its Arab and Muslim neighbors.

The U.S. invasion of Iraq in 2003 and the resulting change in the balance of power in the region brought Turkey and Saudi Arabia even closer together. Both were concerned about Iraq falling into the hands of their common rival, Iran, whose military and political influence increased as a result of the invasion. They also wanted to contain Iran’s influence in Syria and Lebanon.

As a result of these closer ties, in August 2006 the late King Abdullah became the first Saudi leader to visit Turkey since 1966 and made another trip the following year. In return, then-Prime Minister Erdogan visited Saudi Arabia four times from 2009 to 2011.

The high-level diplomatic contacts fostered growing business and investment. Turkish exports of textiles, metals and other products to Saudi Arabia soared from US$397 million in 2000 to $3.6 billion in 2012. And Saudi businessmen who felt unwelcome in the U.S. and Europe after 9/11 saw Turkey as an attractive destination.

A springtime chill in the air

Relations took a sharp turn in the 2011, starting with the Arab spring uprisings that led to the overthrow of governments in Tunisia, Egypt and Libya.

As an advocate of political Islam, Erdogan welcomed the revolutions and the new governments they yielded. The Saudi government, on the other hand, saw the revolts as destabilizing.

This disagreement came to a peak when Mohammad Morsi, who was closely affiliated with the Muslim Brotherhood, won that Egypt’s first post-Hosni Mubarak election in 2012. Erdogan supported Morsi and the Muslim Brotherhood’s rise to power, which was opposed by Saudi Arabia and other Gulf States like the United Arab Emirates. These countries had a long history of hostility towards Muslim Brotherhood activities throughout the Arab world and were concerned that these victories would energize the movement in their own countries.

The rift between Turkey and Saudi Arabia intensified after a military coup ousted Morsi in 2013. Erdogan strongly condemned it and gave the Muslim Brotherhood refuge in Turkey, while Saudi Arabia offered billions in financial aid to cement Egypt’s new military rulers.

Relations took another hit in 2014 when Saudi Arabia actively undermined Turkey’s bid to become a nonpermanent member of the United Nations’ Security Council.

More recently, Saudi Arabia and Turkey found themselves on opposite sides over the Qatar crisis in June 2017. Saudi Arabia, Bahrain, the UAE and Egypt severed all ties with Qatar – and tried to enforce an economic blockade – over the latter’s support for the Muslim Brotherhood and other Islamist groups. They were also upset with Qatar’s refusal to terminate its ties with Iran.

Turkey reacted by expanding its engagement with Qatar, offering economic aid and sending more troops to its small military base in that country. Indeed, Turkish food shipments to Qatar played a crucial role in its ability to withstand the blockade. 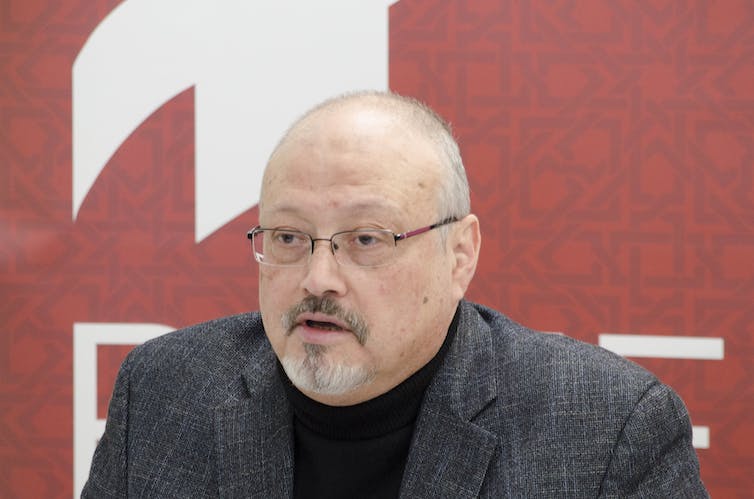 Jamal Khashoggi, missing since Oct. 2, is believe to have been killed. Flickr/The Project on Middle East Democracy, CC BY

So what does this all mean for the current crisis?

That might not, however, be the case. The Turkish government is trying to balance multiple conflicting goals in the way it handles this crisis.

On the one hand, it is trying to show a full commitment to discovering what happened and has put enormous pressure on Saudi Crown Prince Mohammed bin Salman by leaking details of his government’s involvement. But I believe it is also mindful of preventing a further escalation of tensions with Saudi Arabia, which remains a major investor in Turkey.

Meanwhile, Turkey is struggling with a severe financial and external debt crisis at the moment and is desperately trying to attract foreign capital. A withdrawal of Saudi investment or tourists could worsen the crisis.

Erdogan’s initial hesitation in pointing the finger – leaving it to “anonymous officials” – and his call for a joint investigation gave Saudi leadership time to come up with a response strategy, which appears to be blaming “rogue killers.”

In this he seems to share President Donald Trump’s interest in giving Saudi Arabia a face-saving way out of the crisis. The U.S. and the Trump administration also have a lot on the line in their relationship with the Saudi government.

Interestingly, one result of this ordeal, which has plunged Saudi Arabia’s relationship with the West into chaos, may be more cooperation and better ties between the U.S. and Turkey, which now have a great deal of leverage over the kingdom.