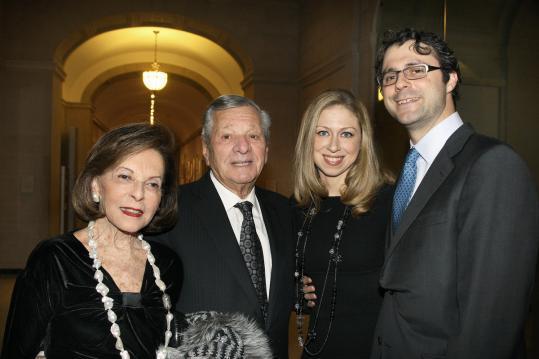 Gerald Schuster, a prominent Boston businessman and Democratic booster known for his far-reaching civic endeavors, has died at the age of 89.

Schuster founded Continental Wingate, a holding company specializing in financial services, real estate development, property management, and health care in 1965, according to a statement from his family.

For a half-century, Schuster, who was known as “Jerry” and raised in Brookline, was the “company’s heart and soul,” according to his family. The company, which is now run by two of his sons, currently owns and operates 5,000 apartments in the US and has invested in nursing homes throughout the country.

The breadth of Schuster’s philanthropy was wide, according to his family.

Get Metro Headlines in your inbox:
The 10 top local news stories from metro Boston and around New England delivered daily.

Schuster, and his wife, Elaine, were longtime supporters of Brigham and Women’s Hospital, Massachusetts General Hospital, and the Dana-Farber Cancer Institute, according to a family statement. At Brigham, the couple established and supported multiple programs, including the Schuster Family Transplantation Research Center, which describes itself as “a multifaceted group of clinicians and investigators that strives to dramatically improve outcomes for recipients of transplanted organs.” In recognition of their work, the hospital named a lobby after them.

Betsy Nabel, president of Brigham and Women’s, called Schuster “a bold, visionary and generous leader” who served the hospital in many ways.

“ Jerry’s generosity and contributions of time, talent, and resources have transformed [the hospital] for the better,” Nabel said. “He will be deeply missed by all those whose lives he touched.”

Bill Clinton is due to speak at a memorial service for Schuster at Boston’s Temple Israel on Sunday.

In a statement, Bill and Hillary Clinton said they “loved Jerry Schuster very much,” adding that for more than 25 years he was “as kind and loyal a friend as anyone could ask for.”

“His passion for life was contagious, and his love for Elaine and the beautiful family they built kept him forever young,” said the Clintons in a statement issued Thursday by the former president’s office. “He also cared deeply about his beloved city of Boston and believed he had a moral duty to give people there more opportunities to build their own best lives. We will always be grateful for his support and for the many good times we shared together.”

Schuster died at his Boston home on Oct. 17, surrounded by family, including his wife of 65 years, Elaine. His family said the cause of death was cancer.

Relatives remembered Schuster as a consummate family man and natural leader who had a dogged work ethic and wry sense of humor.

“He would look around a crowded meeting and announce that he’d calculated the amount of overhead being wasted by having so many in attendance,” said his son, Mark, in a statement.

The duo couple were also instrumental in creating the Schuster Institute for Investigative Journalism at Brandeis University. That center was launched in 2004 to “help fill the void in high-quality public interest and investigative journalism.”

Brandeis President Ron Liebowitz praised Schuster as “a tireless champion for progressive causes and a visionary who, along with his wife, Elaine, invested in Brandeis, which he loved.”

“His philanthropic legacy is profound and the impact on scores of Brandeis graduates who have gone on to change the world through truth-telling in journalism and other public service positions will endure,” said Liebowitz in a statement Thursday night.

The Schusters also started a fund at Tufts University to support faculty development and active citizenship.

In 1983, Schuster helped establish a nonprofit that provided free housing for thousands of people who were family and friends of patients who were receiving care in Greater Boston, his family said.

Schuster also established networks centers at Continental Wingate properties in Boston and Atlanta that provided mentoring, tutoring, and life-skill training for urban youth, according to his family.