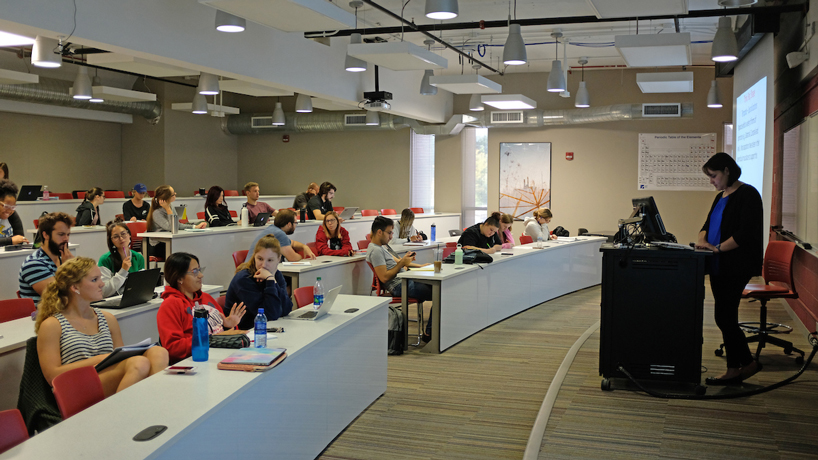 Assistant Teaching Professor Laura Catano teaches a course on vertebrate anatomy in the newly renovated ground-floor lecture hall in Room 103 of Benton Hall. The room was refurbished as part of a $25.3 million renovation completed in August. (Photos by August Jennewein)

Peter and Gregory Kersulis had staked out space early last week on the third floor of Benton Hall.

The two University of Missouri–St. Louis students were doing physics homework and laughing over a video on one of their cell phones as they sat together at a table in one of the hallway study areas overlooking the grassy courtyard on the north side of the building and Bugg Lake beyond.

The area has become a regular destination whenever the two pre-engineering majors in the UMSL/Washington University Joint Engineering Program are looking for a place to study in between or after classes.

“Any place with windows is always nice,” Peter Kersulis said. “That’s usually what we look for.”

Biology major Muhammad Qayyum had made his way there for similar reasons and, at that moment, was leaning into his textbook two tables away.

“It’s easy to study here,” Qayyum said. “It’s really comfortable. I have all of my classes in this building, so I don’t have to go far.”

Students Muhammad Qayuum and Gregory and Peter Kersulis take advantage of one of the bright study spaces on the third floor.

They’re all part of a slowly growing number of students taking advantage of the sleek aesthetics found in Benton Hall since its $25.3 million renovation, completed in August.

The Illinois-based firm River City Construction served as the contractor for the project, which the university funded with $13.6 million in state bond funds and $8 million from the University of Missouri System, along with money from UMSL’s operating funds and a private donation.

Students and faculty alike are still learning and discovering some of the changes – including a series of new meeting rooms and refurbished offices – in a building at the heart of UMSL’s science complex and home to the Departments of Biology, Chemistry and Biochemistry and Physics and Astronomy, as well as the joint engineering program.

“I think the students like having the new space,” Assistant Teaching Professor Laura Catano said. “There’s a lot of different nooks where there’s comfortable seating, and I see students aggregating in groups and talking and working on assignments together.”

The improvements run much deeper, including in the classrooms.

Catano, a member of the Department of Biology, teaches a pair of courses in the building, including one on Vertebrate Anatomy, Ecology and Evolution in the ground-floor lecture hall in Room 103.

She’s enjoyed making use of the new technology in the space, including dual monitors that make it easier to use PowerPoint’s presenter view when delivering her lectures. The configuration of the room, wider than it is deep, allows her to better connect with students.

“All of the students are kind of closer to me as opposed to this narrow, long lecture hall where the students sit in the back and I can hardly see their faces,” Catano said. “I really like that aspect of it.” 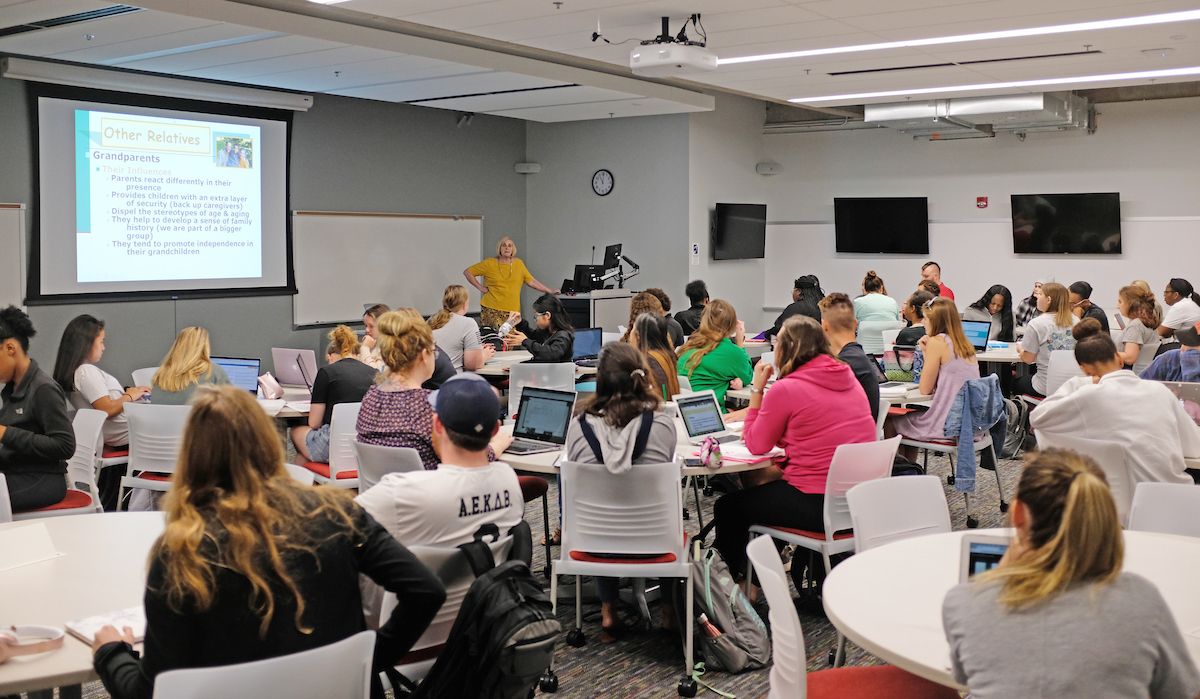 Students fill the flexible learning studio on the ground floor for a class with Teaching Professor Emeritus Dyan Harper of the Department of Psychological Sciences.

Inside Room 104 at the opposite end of the hallway resides one of the building’s new highlights, a flexible learning studio featuring easily rearranged round tables and LCD screens on the surrounding walls.

“It’s is a fairly new concept that we’re employing,” said Wayne Martin, a senior construction manager in the Facilities Management department who oversaw the project. “From small to large classes and to have the technology and the ability to break out in small groups – that’s a nice feature.”

Sage Rohrer, who earned her undergraduate degree at UMSL and is now pursuing her PhD in biology, had positive reviews for the third-floor lecture hall – with improved technology and furniture and outlets near each desk – as well as the various conference rooms throughout the building. She also noted the expanded space for the Whitney R. Harris World Ecology Center on the ground floor, where she meets weekly with her labmates.

“It’s beautiful,” Rohrer said. “I think they’re still in the process of decorating, but there’s a very nice view of the lake in front of the conference room and lots of space and lots of windows. So we have our weekly lab meeting there, but I think it’s also a nice place to bring visiting scientists for lunches with the graduate students and things like that. It’s a really good space for that sort of thing.” 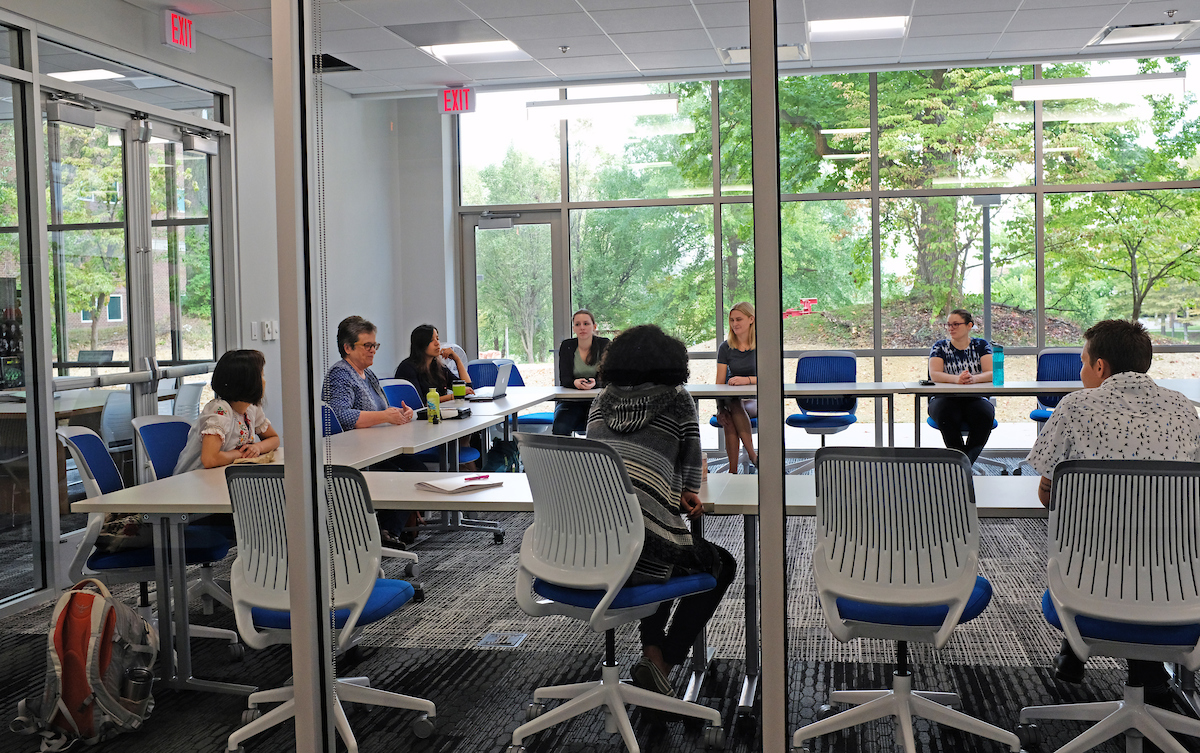 There have been other upgrades less apparent to the naked eye.

The building underwent an asbestos abatement; all of the electrical, mechanical and plumbing systems in the building have been replaced and upgraded; and new windows have been installed throughout.

It didn’t take long for former Benton Hall occupants to recognize a difference when they moved back in.

“The air handling system is much better,” said Hal Harris, professor emeritus of chemistry and biochemistry. “My office on the other side was incredibly hot in the summer – unbearable. You had to have the windows open. On this side, people were freezing all winter. They brought in space heaters to try to keep warm. I haven’t seen the figures, but I’m sure the building is a lot more efficient than it was.”

Faculty and staff are relieved to be rooted again in one place.

Many had to be displaced to other parts of the science complex – the Center for Nanoscience, the Research Building, Stadler Hall and the Science Learning Building – and as far away as Lucas Hall while construction was ongoing.

It was also a challenge to get the work done without interrupting activities in nearby buildings because mechanical and electrical systems from other buildings ran out of the basement of Benton Hall.

“The campus possibly doesn’t realize all of the various entities that go into pulling this off,” Martin said. “Obviously, there’s facilities management, and there’s the maintenance side as well. But you’ve also got the IT department; the registrar’s office, who handled the scheduling of classes; the faculty and staff; and we have our movers. We have to move all the furniture out and back in. The contractors, the design team. Furniture suppliers for procurement – there’s a lot of moving parts. Campus police. Security. It was truly a team effort.” 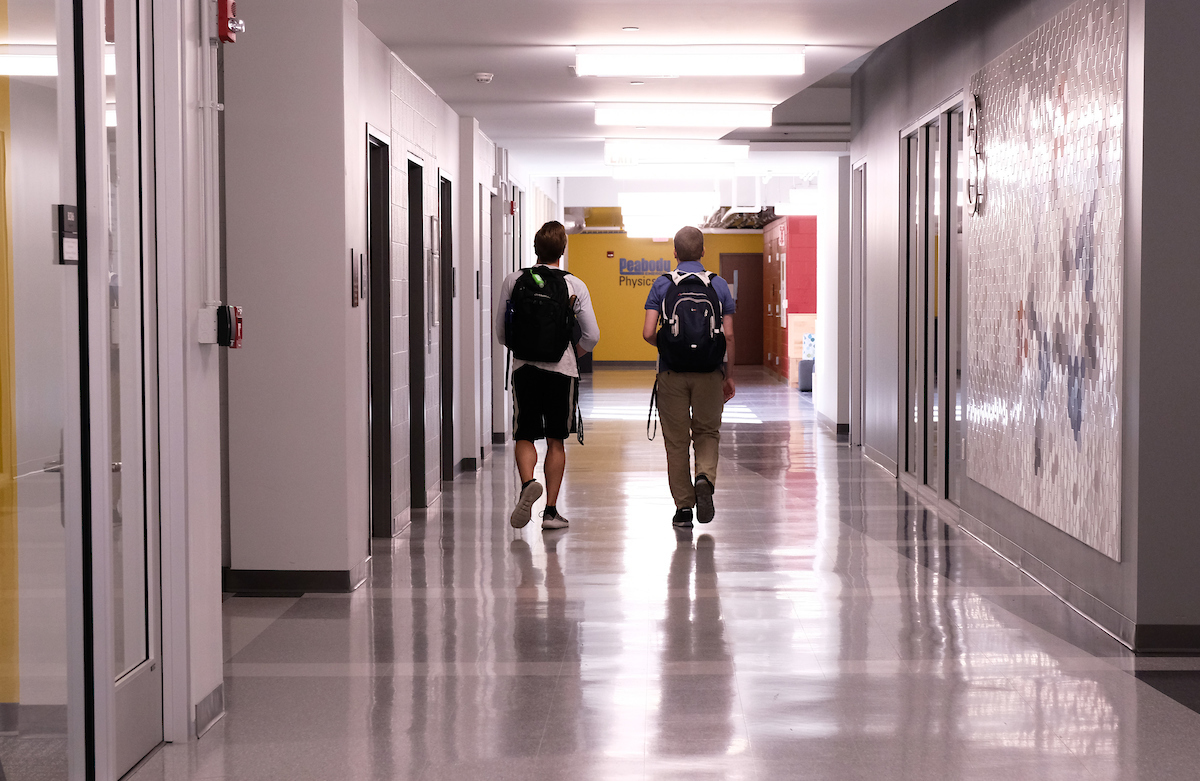 Students walk down the newly renovated hallway on the third floor of Benton Hall.

Martin said it was all worth it in the end as the job finished on time and under budget.

The space should not only serve current members of the campus community going forward, but it might also help attract new ones.

“It’s just very clean and modern looking to me now,” Catano said. “I’m sure new students that come in will appreciate that, especially with the new Science Learning Building too. This whole science complex is getting a whole new face.” 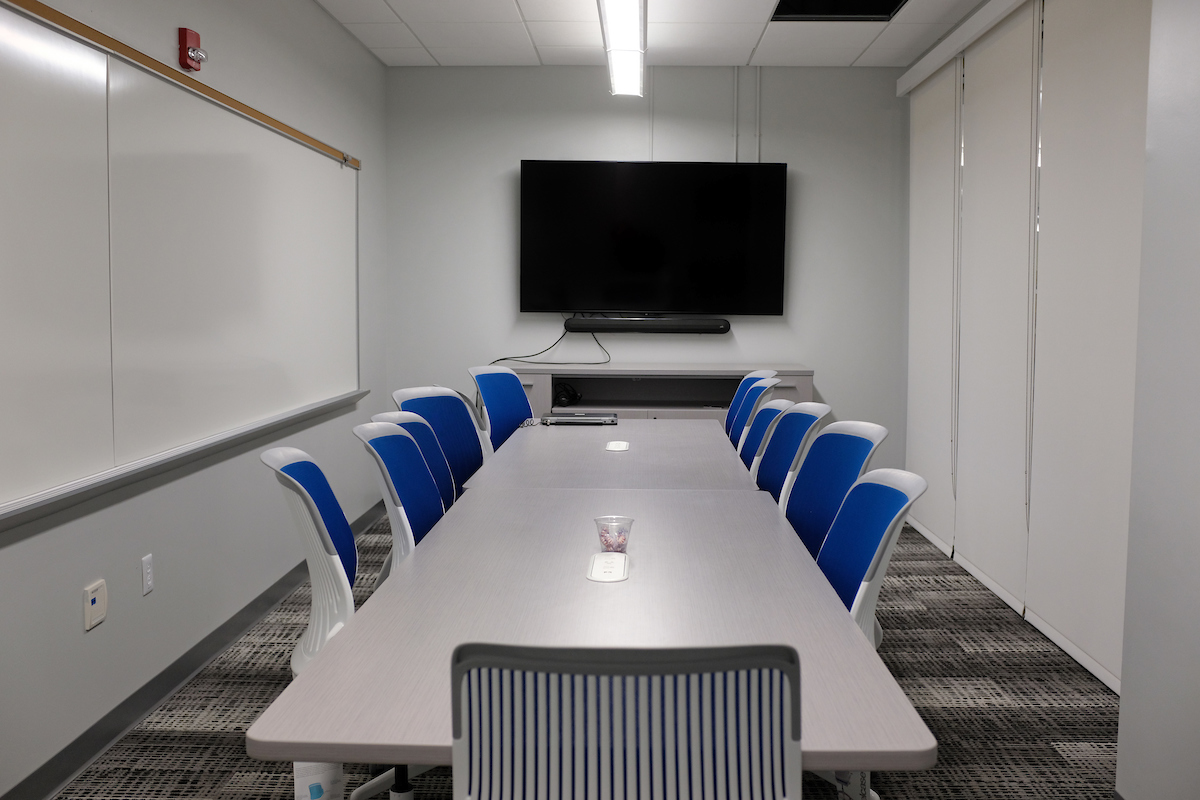 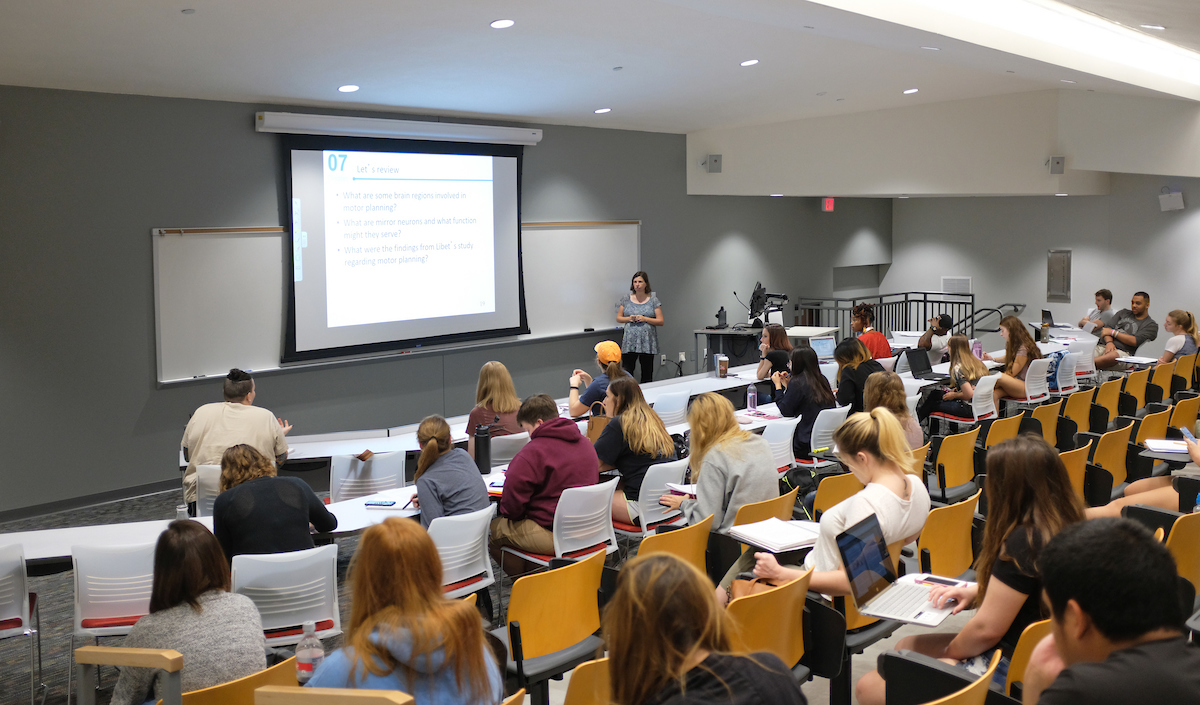 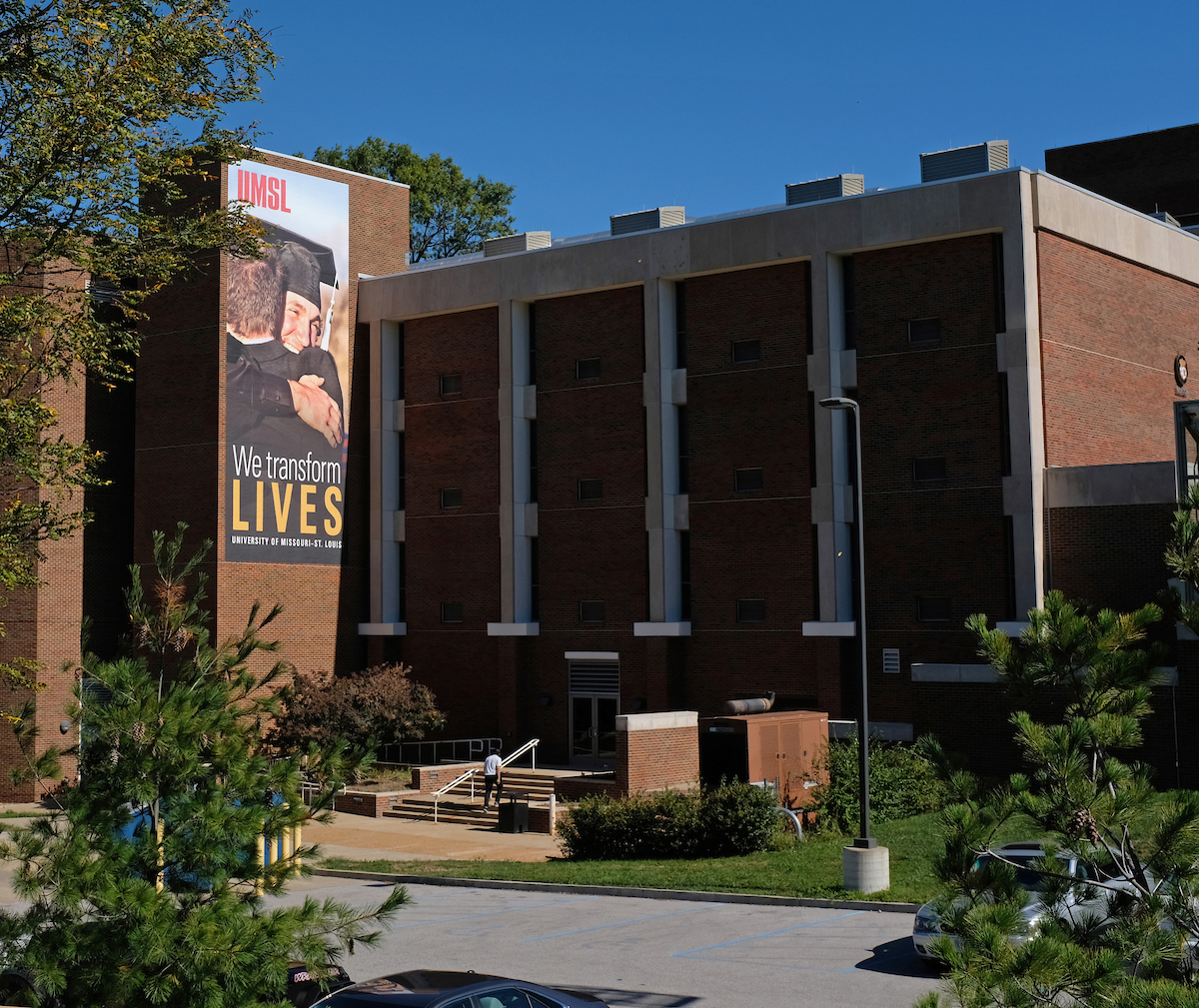 West side of the building