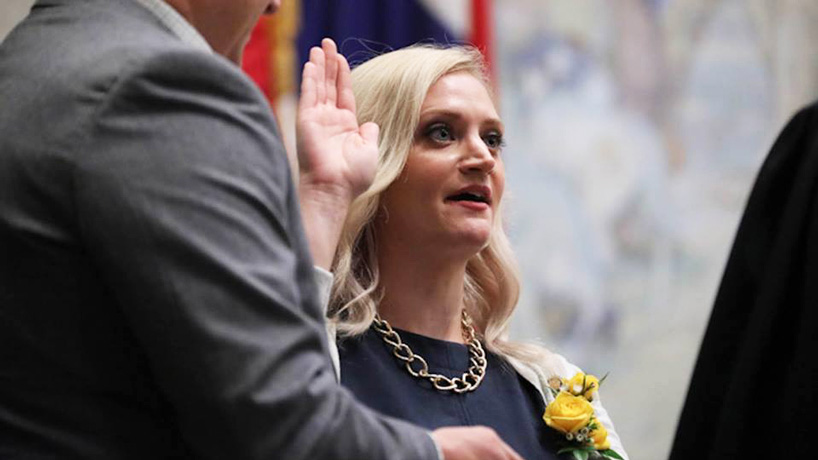 Lauren Arthur (MEd 2013) is sworn in as a new member of the Missouri State Senate on Sept. 12. The UMSL College of Education alumna has made education one of her top legislative priorities. (Photo courtesy of Legislative Assistant Pedro Guerrero)

Lauren Arthur came away from her experience with Teach for America knowing that she wanted to get into politics.

Arthur started as a middle school language arts teacher at the Urban Community Leadership Academy charter school through Teach for America in her native Kansas City in 2010. She went into the program seeking to help students from under-resourced communities.

“I’m not sure the extent to which I made a difference in my students’ lives, but they made a difference in mine: They informed my decision to pursue public office,” Arthur said. “I saw the need to advocate for vulnerable populations and felt it was necessary to change and improve the system from within it.”

Through the University of Missouri–St. Louis College of Education’s partnership with Teach for America, Arthur paired her teaching experience with progress toward an MEd in secondary education, which she earned from UMSL in May 2013.

In November 2014, the Democrat won election to the Missouri House of Representatives and, in a special election in June, she won her race for the State Senate by nearly 20 points.

Arthur took her oath of office, representing the area north of Kansas City, on Sept. 12. She is not forgetting what drew her to this line of work in the first place: pushing for universal pre-K in the state is high on her list of priorities.

“We are already behind on this important issue, and evidence clearly supports that this is one of the most important investments we can make,” Arthur said. “I will champion this cause.”

Tom Stephens, an assistant teaching professor at UMSL and an advisor in the school’s Teach for America Kansas City program, said Arthur is the first of his students to become a politician. He keeps track of all of his former advisees and has seen them follow entrepreneurial pursuits, go to law school or medical school and, of course, continue teaching or become school administrators.

He feels that, with the amount of say the Missouri General Assembly has in charting the direction of the state’s educational system, it’ll be beneficial to have another legislator like Arthur, who has a theoretical and practical understanding of the issues that face Missouri schools.

“Lauren was a great teacher, very inspiring to the kids,” Stephens said. “She was a good role model too. Her principal was impressed with her ability to work with her colleagues collaboratively when they were doing curriculum development and discussing test scores. She always seemed to be very drawn to leadership roles, and she was especially good with parents. I was very impressed with that. She built relationships with her students, and that ability and style carried over to the parents.”

UMSL has been a university partner of Teach for America since 2006. Every year, around 175 candidates are placed in St. Louis and Kansas City, starting their teaching careers at schools that serve students who find themselves at the wrong end of the nation’s educational inequities.

The partnership with UMSL allows Teach for America candidates to take the necessary coursework to earn their certifications within two years and also leaves them in advantageous positions to pursue their master’s degrees.

“Even though they’re first- and second-year teachers with no experience or particular training in education, they are terrific teachers,” Stephens said. “The reason for that is that they are so dedicated to their job, to helping students, to raising students up and giving them opportunities through education. They’re very dedicated, and they put in a tremendous amount of time.”

During her stint in the Missouri House of Representatives, Arthur sponsored bills on issues such as appropriate health care for children in foster care and ensuring taxpayers receive the same interest on their refunds if the Department of Revenue is late in sending the return as they would be expected to pay if they submitted their taxes late.

She’s looking forward to working across the aisle in her new role, keeping education at the forefront.

“I believe in compromise, and I hope there are opportunities to advance legislation that truly benefits Missourians,” Arthur said. “It is truly the greatest honor of my life to get to serve my friends, family, neighbors and constituents in the Missouri Senate.”