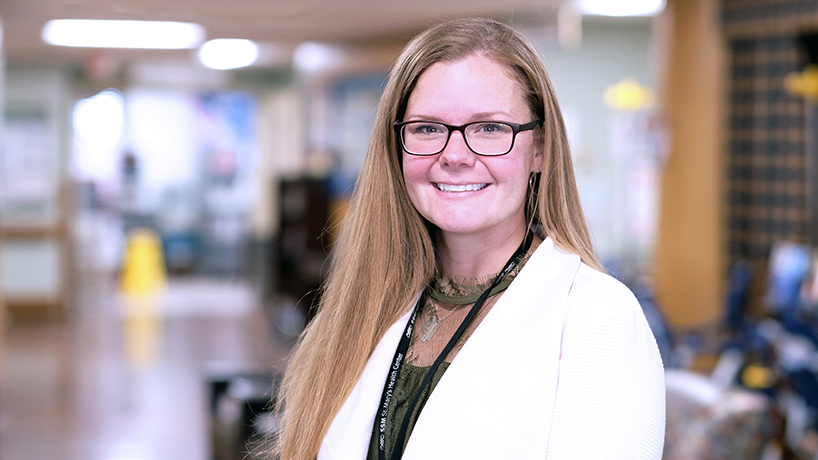 Jessica Dickman spent her first year as a nurse as part of a small pediatric unit at a community hospital.

One day, she was tending to a patient when he had had an adverse reaction to medication and was having difficulty breathing. Dickman was not initially sure what was going on, and the patient’s mental handicap prevented him from communicating clearly.

She called for an emergency nurse response team, and they ultimately called in a physician to give the order for medication to reverse his breathing difficulties.

That near-death experience galvanized Dickman to get back into education.

“In that moment, even though the patient didn’t die, I felt that I’d never know enough because the patients rely on me to always continue my learning,” she said. “I would have to be an eternal student in the nursing profession and obtain an advanced degree so that I can be the person who makes the judgment calls and saves lives while improving patient’s lives on a holistic level through compassionate care.”

Dickman has since earned a master’s in nurse leadership, and in August, she completed a DNP from the University of Missouri–St. Louis College of Nursing.

Patty Hendrickson, VA St. Louis associate director for patient care services, approached Dickman and asked her to help roll out telehealth care. The VA St. Louis already had a telemedicine system called VA Video Connect – but only a couple of coastal hub centers were using it. With a background in neuroscience, Dickman approached the challenge in the St. Louis Polytrauma Network Site, the VA’s traumatic brain injury clinic. 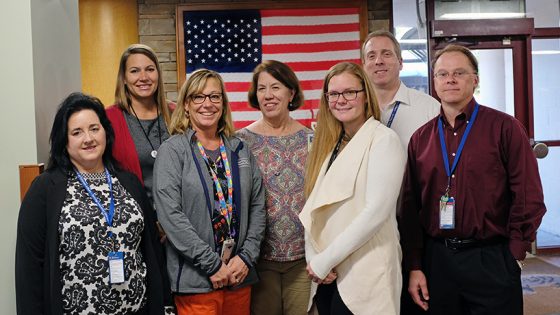 “It sounded like their outpatient follow-up rates were very, very poor,” said Dickman, explaining that more than one in four patients did not show at appointments due to depression, forgetfulness due to TBI, socioeconomic disadvantage or other commitments.

She attended the TBI clinic twice a week for two hours to discuss the VA’s goals and design the telehealth test. If patients were not present within five minutes of their scheduled appointments, VA doctors called and offered to do 10-minute telehealth appointments. TBI clinic doctors in the area of speech therapy, clinical care, case management and psychology used the technology, and suicide prevention decided to adopt it later.

“The trauma exposure from war affects veterans all individually in so many different ways psychologically,” Dickman said. “A lot of vets struggle with substance abuse, and they are undiagnosed with TBI. When you see a veteran who is homeless or something like that, they could have a TBI that’s very treatable and not be aware of it.”

She spent 10 months designing the program, educating staff, synthesizing research, getting institutional review board approval, implementing a two-month test run and contemplating results. During the test period, VA doctors offered the telehealth alternative to all of their “missed opportunity” patients and dropped the no-show rate by 7 percent.

Since the end of her test period, the VA has retained the program and expanded it to include on-demand appointments for primary care, emergency care and psychology.

Dickman, on the other hand, rolled up her clinical project experience with the DNP’s teachings on quality improvement to elevate her role as stroke coordinator at SLU Hospital.

From June 2013 until April, Dickman was the stroke coordinator at SSM Health St. Mary’s Hospital – St. Louis and started at SLU Hospital in April. Her new employer was agreeable toward evolving the once exclusively leadership role to include clinical practice. She manages the internal aspects of the stroke program and coordinates the operations of all the disciplines using evidence-based leadership strategies in conjunction with clinical skills.

“I am constantly trying to improve outcomes by using data to support process-improvement goals,” Dickman said.

One area that Dickman is working on is ischemic stroke care response time. She helped create a “standard work,” a series of actions for the many players in stroke emergency care. Dickman lives by the mantra “time is brain” and made an easily comprehensible chart that quantified brain damage sustained during strokes that she uses to motivate her peers. She has seen strides in providing emergency surgery known as endovascular clot retrieval, in which doctors retrieve a clot obstructing blood flow to the brain that could lead to lifetime disability.

“We were in the 150-ish minute range when I started, and we’re down to the 40s,” she said. “We have some cases that are 110 or higher, but we want to make sure all cases are below 60 minutes, and we are working really hard to do that.”

Coordinating care in a chaotic code situation is difficult, but Dickman is heartened by SLU Hospital’s response time in administering the gold-standard stroke drug, Alteplase IV r-tPA, which, at an average 35 minutes, is well below the American Stroke Association’s recommendation of 45 minutes.

Though she loves neuroscience and her current role, Dickman’s time in the VA inspired her to work on increasing access to care for vulnerable populations, and she would eventually like to move into family health.

“Long term, I would love to work in an outpatient clinic promoting health or improving access to care,” she said. “I really would like to be able to go somewhere in a rural community and really be able to be there for a community that can rely on me to diagnose them appropriately.”